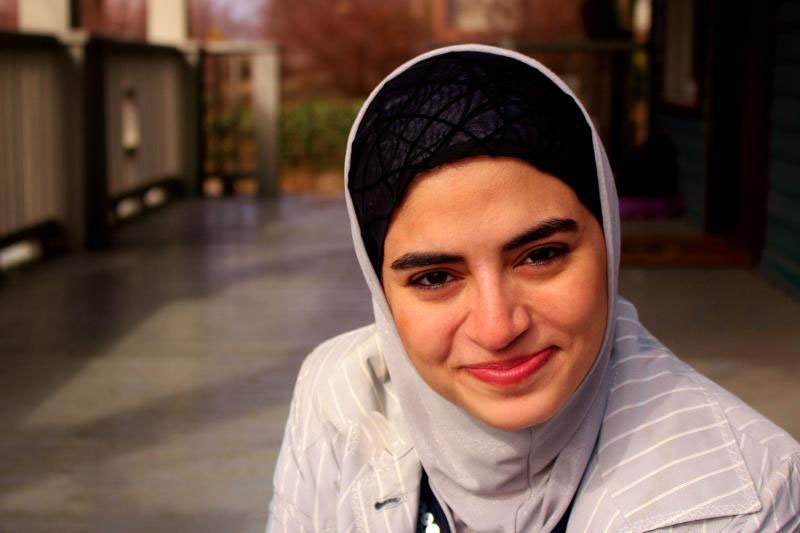 Courtesy Photo Kholoud Sawaf hopes that "10,000 Balconies," inspired by Shakespeare's "Romeo and Juliet" and set in modern-day Damascus, will reach "the heart and mind."

When the workshop production of "10,000 Balconies" -- a play conceived, created and directed by Kholoud Sawaf -- debuts in TheatreSquared's new black box space, it will be a production of "firsts." It will be the first event in the new Spring Theatre; the first show Sawaf, who took her inspiration from Shakespeare's "Romeo and Juliet," has both conceived and directed; and the first show with such a large representation of people of color in the cast.

"It is actually the biggest cast of color in the history of TheatreSquared, after [last year's] 'Vietgone,' which I also directed. We have 10 people on stage who are specifically from the Levant," says Sawaf, who explains that Levant countries include Lebanon, Palestine, Jordan and Syria. "10,000 Balconies" is set in Damascus, Syria, Sawaf's hometown. "All of the cast members, as well as collaborators, have a connection to the Levant, whether they are from there or their families are from there. That was really something that was purposeful, to make sure that the work is accurate and authentic."

Sawaf was a recent graduate of the University of Arkansas' MFA program in directing and a T2 artist-in-residence when she collaborated with T2 to apply for -- and win -- a $250,000 grant to fund the development of this piece. The mission of the grant, received through the Building Bridges Program of the Doris Duke Foundation for Islamic Art, is to "advance relationships, increase understanding and reduce bias between Muslim and non-Muslim communities." Sawaf says "10,000 Balconies" aims to do exactly that.

"There are a lot of assumptions, a lot of stereotypes, a lot of perceived notions about the place called Damascus and the place that is called Syria now," she says. "There is definitely an interest in learning more and knowing more, and I think that's a great place to start. A hunger for knowledge and education and asking questions is a powerful place from which to approach it.

"But how do we do that so that we show and don't tell, so that it's not a lecture? Instead, it's hopefully artistic and meant to evoke rather than to make you heavy. I'm hoping it reaches the heart and mind. It is a piece that is coming with the whole package which says, 'This is my home, which is not how I think you perceive it, so come along with us on this journey.'"

Sawaf says the reception she's received from fellow Syrians has assured her that she is on the right track.

"There is nothing that is more inspiring and more beautiful and touching than talking to other Syrian collaborators and hearing, 'This is us. This feels so much like me, so I want to be a part of it, I want to support it.' One of the early conversations I had with one of the actors who has been a major force in the creation -- when I was telling him about it, he said, 'That is so much us.' That was more important than anything else I had heard, the idea of hearing that from a fellow Syrian who was recently coming from Damascus meant everything to me and were the most empowering, beautiful words."

For Sawaf, the future beyond this production is uncertain. As someone from Syria, the Trump Administration's Executive Order 13769 -- commonly known as the "travel ban" or the "Muslim ban" -- means she hasn't seen her family in five years. As she navigates through the visa renewal process, it has also put her future in the United States in jeopardy. She says several arts organizations have been instrumental in supporting her through this difficult process -- including the Hudson Valley Shakespeare Festival, the University of Arkansas, Art2Action, The Hippodrome Theatre, NYTW and the Drama League.

"It's easy to say, 'This country doesn't want me and is very clear about it -- what if I walk away from this whole place all together?'" Sawaf says. "But after getting major investments from major organizations on a piece like this, you feel the responsibility of 'I can't walk away from this.'

"I was part of the family of TheatreSquared since 2015, and as a student since 2013, and you don't let down family. Now that I'm concluding this relationship with this grant and with TheatreSquared, I can consider this. I'm glad this grant gave me a home base to be employed on a part-time basis as an employed person and allowed me to travel and make all of these national relationships with theaters outside of Arkansas that came to support me through this time and might, eventually, save my life."