Thomas punishes Medinah with a 61 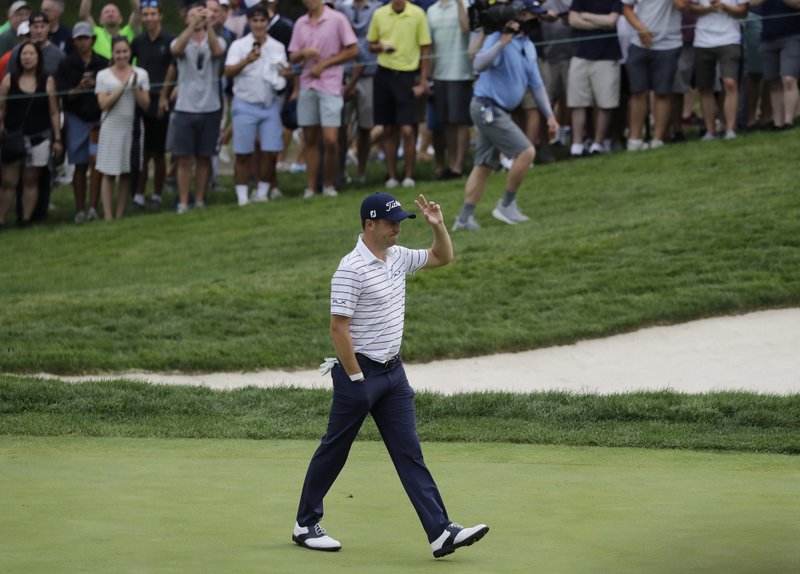 Justin Thomas celebrates an eagle on the 16th hole during the third round of the BMW Championship golf tournament at Medinah Country Club, Saturday, Aug. 17, 2019, in Medinah, Ill. (AP Photo/Nam Y. Huh)

MEDINAH, Ill. -- Winless over the past 12 months, Justin Thomas knew he was playing well and he was due for a low round.

Saturday at the BMW Championship was more than he imagined.

Thomas smashed the course record at Medinah with an 11-under 61 that gave him a six-shot lead over Patrick Cantlay and Tony Finau.

He opened with five birdies, and none was worthy of a highlight reel because of what followed. He hit a 5-wood from 260 yards on the par-5 10th that was so pure he twirled his club and watched it roll out to 2 feet.

That wasn't among the top three memories Saturday.

"I'm very lucky that I had a couple to choose from today," Thomas said.

In fluffy grass behind the 14th green, he chipped in for birdie. From 180 yards in the 16th fairway, he holed out for eagle.

He his best shot was the next hole, a 9-iron from forward tees to a front pin over the water to 6 feet for his eighth birdie of a remarkable round.

"It was easy to get pretty wrapped up in the emotions and get the adrenaline going, and I had to take a little bit off that 9-iron," Thomas said. "If I'm trying to be perfect there and I don't hit it right, that very easily could go in the water."

Thomas was at 21-under 195, with Finau (68) and Cantlay (67) chasing him. He has a clear path to his first victory since the Bridgestone Invitational last August, along with the lead going into the Tour Championship next week and the chase for a $15 million prize.

Only seven players in PGA Tour history have lost a six-shot lead in the final round, most recently Dustin Johnson at the 2017 HSBC Champions.

The goal for Tiger Woods is simply to get to the Tour Championship, where last year he ended five years without winning. Woods had a bogey-free 67, his lowest score since the final round of the Memorial.

When Medinah is this much of a pushover, it didn't help all that much. He was tied for 31st, with some 18 players ahead of where he needs to be to move into the top 30 in the FedEx Cup and advance to East Lake.

"I shoot 60, it should be all right," said Woods, a tongue-in-cheek comment made about the time Thomas was teeing off.

Thomas, who shot 59 at the Sony Open in 2017, opened with a pair of 12-foot birdie putts, hit to 2 feet on No. 3, holed a 15-footer on No. 4 and was out of position only briefly before a fifth straight birdie on the par-5 fifth. But it was the back nine where Thomas seized control.

"I've been around enough. That was really impressive," said Finau, who played with Thomas. "It's fun to watch. Whenever you see a guy playing that well in a zone, really cool. He was already playing well, and that shot on 16 put him over the top from well to ... really well."

Finau holed out from the fourth fairway for eagle. Cantlay had five birdies. Brandt Snedeker chipped in on both par 3s on the back nine in his round of 67.

"It doesn't matter what golf course it is," Thomas said. "You give us soft, good greens and soft fairways, we're going to tear it apart. It's just how it is."

All but two players in the 69-man field -- Harold Varner III and Cameron Champ -- were at par or better.

In five majors held at Medinah, the lowest score was a 65. That was matched twice Thursday by Thomas and Jason Kokrak. Hideki Matsuyama set the standard with a 63 on Friday. Thomas beat that by two.

"I hope the trend doesn't continue unless it's me," Thomas said with a grin.

For others, plenty is at stake.

Rory Sabbatini shot 30 on the back nine -- four birdies over his last five holes -- and was alone in fourth. That would be enough to get him into the Tour Championship for the first time since 2007, the first year of the FedEx Cup.

"I kind of had a target in mind, and I'm a couple shots shy of getting there, and so ... I have to go grind it out and really put my foot down," he said.

Finau could lock up a spot on the Presidents Cup team if he were to keep his position, even better if he were to finish alone in second. Lucas Glover was nine shots behind but still projected to be among the top 30.

The perks of the Tour Championship include a chase for a $15 million top prize, along with a spot in all the majors next year. For Thomas, winning means a return to Maui to start the year with the rest of the PGA Tour winners.

Starting times have been moved up because of more rain in the forecast. Without wind, that has meant lower scoring than Medinah has ever seen. 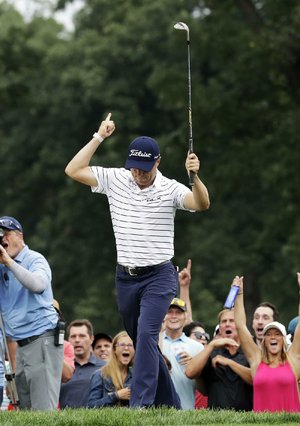 Photo by AP/NAM Y. HUH
Justin Thomas celebrates after chipping in for birdie on the 14th hole Saturday at the BMW Championship. Thomas fired an 11-under 61, a new course re- cord, and holds a six-stroke lead.