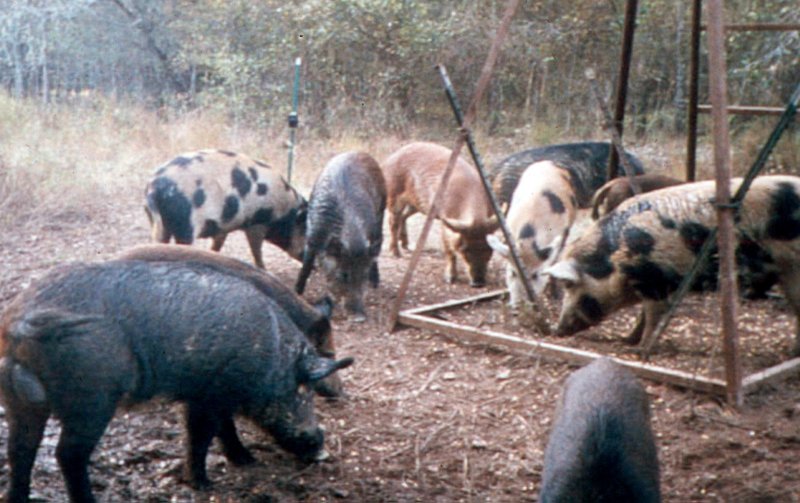 It was a legitimate question.

William McNabb had watched the coverage of the two mass shootings. Twenty-two people died after a man walked into a Walmart in El Paso, Texas, on Aug. 3 and opened fire. After midnight the next day, another gunman killed 10 more in a historic district in Dayton, Ohio.

The shootings reignited a national debate about gun laws in the United States, and whether new restrictions on guns need to be considered.

McNabb, who lives in a rural area near El Dorado in Union County, chimed in Aug. 4 after Jason Isbell, a singer and songwriter with more than 279,000 followers on Twitter, questioned in a post why anyone would argue the definition of an "assault weapon," adding that the guns weren't necessary.

"Legit question for rural Americans," McNabb wrote. "How do I kill the 30-50 feral hogs that run into my yard within 3-5 mins while my small kids play?"

"You always hear about viral tweets," McNabb said. "But you never think you are about to become one."

McNabb's response, and his back-and-forth with Isbell, became the center point of countless memes that flooded the Internet. Most poked fun at the idea of 30 to 50 feral hogs running through someone's yard.

"It was really strange," McNabb said. "The first thing I noticed was the memes, which I found very funny."

Over the next several days, McNabb's post showed up in the timelines of more than 2 million Twitter users worldwide.

"It sort of gained life from there," McNabb said. "I knew [Isbell] grew up in the South, and I had my own personal experience that was very real to me regarding the feral hog issue. I didn't take a whole lot of time to think of the depth of tweet."

For McNabb, the reason for owning an assault rifle to combat feral hogs wasn't a laughing matter.

The North Carolina native moved to Arkansas after graduating from college and lived in El Dorado before moving to a more rural area. He and his family enjoyed the peaceful country living for the first couple of years, but one spring day everything changed.

"My kids were pretty small at the time, but they were outside playing when my wife yells out that there are pigs all in the yard," McNabb said. "I grab my hunting rifle out of the gun safe and head out the door."

He was greeted by something he'd never witnessed.

"There were wild hogs everywhere, from one end of the yard to the other end," McNabb recalled. "I noticed my wife had gotten to the kids and she had control of my children. My kids were safe. I then started shooting [at the hogs]."

"It happened so fast. It's where the three-to-five-minutes sentiment came from," he said. "It was a shocking experience. The kids were small and these were some pretty large hogs, about 300 to 500 pounds."

The hogs have come back three times since then, McNabb said, and they scatter after the first shot.

"I don't have a pack of hogs running through my yard every day," he said. "But I understand how some of my neighbors who have [AR-15s] and [AK-47s] in response to this issue might feel the need for them."

McNabb said that point was lost in the flood of Internet jokes made at his expense.

"Hogs running across the nation was a wild idea to people," McNabb said. "I got replies about why don't I build a fence, but they don't realize hogs can go through a fence."

Without realizing it, McNabb had stepped smack dab into the middle of a continuing gun debate.

"I was getting all of the media requests, but I just wanted to stay out of it," he said.

So what caused his "30 to 50 feral hogs" statement to go viral among the millions of tweets that are posted every day?

That might never be explained, said professor Filippo Menczer, but he offered a theory on why a tweet gains traction.

"We find that this is more likely to happen organically if a tweet has high appeal across different communities," Menczer, a professor of Informatics and Computer Science at the Indiana University School of Informatics, Computing and Engineering, said in an email. "For example, if one is likely to retweet irrespective of the source. Something very interesting to a particular community may spread very fast inside that community but not go further."

Menczer said that if a tweet is retweeted by an influential user -- in this case, Isbell -- chances also increase because the tweet is exposed to many more people, especially if the influential user has followers across different communities.

Both positive and negative memes go viral, Menczer said, but in general positive messages are more likely to do so.

"For people who are targeted by negative memes that go viral (often amplified inorganically), there can be consequences such as threats, trolling, and cyberbullying," Menczer said.

"People started telling me they were driving by my house," McNabb said. "Some people were taking photos of my home using Google Earth and posting them online. People were threatening to call [the Department of Human Services] and get my children taken away from me. They were calling my workplace.

"I was concerned for everyone's safety."

At one point, McNabb said, a company used his Twitter profile photo -- which included his daughter -- to make coffee mugs and T-shirts.

"It was a stunning invasion of privacy," McNabb said. "I understand when you post on social media that you are making that public, but I didn't see the way it could affect my family and my business."

After reactions to the tweet took a dark turn, McNabb reached out to Yashar Ali, a freelance journalist who contributes to numerous national publications, to provide a statement explaining his reasoning behind the question he posed to Isbell.

"Some people I spoke to said they used ARs and AKs because the hogs ruined their farmland and their yards," McNabb said in the statement. "I have never owned a military-style assault rifle, but after the experience I went through, it didn't seem completely unreasonable."

"I got an overwhelming amount of support," he said. "I had far left and far right figures both saying they could see I was trying to reach out for a solution."

McNabb said he doesn't know the answer to the gun debate.

"I believe in common sense gun laws and background checks and closing gun show loopholes," he said. "Like most Americans, I am tired of waking up to another mass shooting.

"There has to be something we can all agree on."

Several national and international publications did stories in the wake of McNabb's initial tweet, many of which addressed the real threat behind a growing feral hog population in rural communities in the South.

"It's a significant problem," Arkansas Game and Fish Commission spokesman Keith Stephens said. "It's such a problem that the Arkansas Feral Hog Eradication Task Force was created and includes a number of agencies."

Feral hogs can be found about anywhere in Arkansas. They live in the wild, but come from released or escaped domestic hogs, Stephens said. Illegal relocation of the animals for hunting purposes helped their spread, he said.

The hogs aren't native to the United States and are considered an invasive species, a public nuisance and threat to the state's resources. They are responsible for an estimated $19 million in row crop damage in Arkansas and $1.5 billion in damages nationwide annually, according the Game and Fish Commission.

"They compete for food resources, destroy habitat by rooting and wallowing and will eat ground-nesting birds, eggs and fawns," Stephens said. "They also carry up to 45 bacteria, diseases and parasites, including Trichinellosis, Brucellosis and swine herpes virus."

McNabb said he believes the misunderstanding regarding his tweet comes from an unfamiliarity between rural and more metropolitan communities.

"That is why it's important to create a dialogue, but Twitter is not the place for debate," McNabb said. "Twitter can start the dialogue, but people got to sit down to find common ground. We got to talk to people. ... Just because the situation is strange to you doesn't make it any less real."

WORD TO THE WISE

Most viral tweets remain in the public consciousness for a brief time.

"The attention cycle is usually short (hours/days), but occasionally can be very long (months)," Menczer said in his email. "We have found that when something goes viral, others will create more related content (true or false) to exploit that public attention."

McNabb has experienced that, too. He said he has sent a cease-and-desist letter to the company that used his image without permission to make coffee mugs and T-shirts. He's also trademarked the phrase "30 to 50 feral hogs" and is creating a nonprofit to be connected to it.

Fortunately for McNabb, another new Internet sensation -- this one a video of a salmon flying through a tube -- seems to have replaced his "30 to 50 hogs" tweet as the Internet's new favorite meme source.

Despite the unwanted attention he received, McNabb said he doesn't regret sending his original tweet.

"I learned [that] the nuances of the platform doesn't allow for deep discussion because of the character limit," he said. "I possibly could have worded it differently, but the attention it brought to the feral hog issue was important. My family is OK, and the support has been positive recently."

But he does have some advice for others.