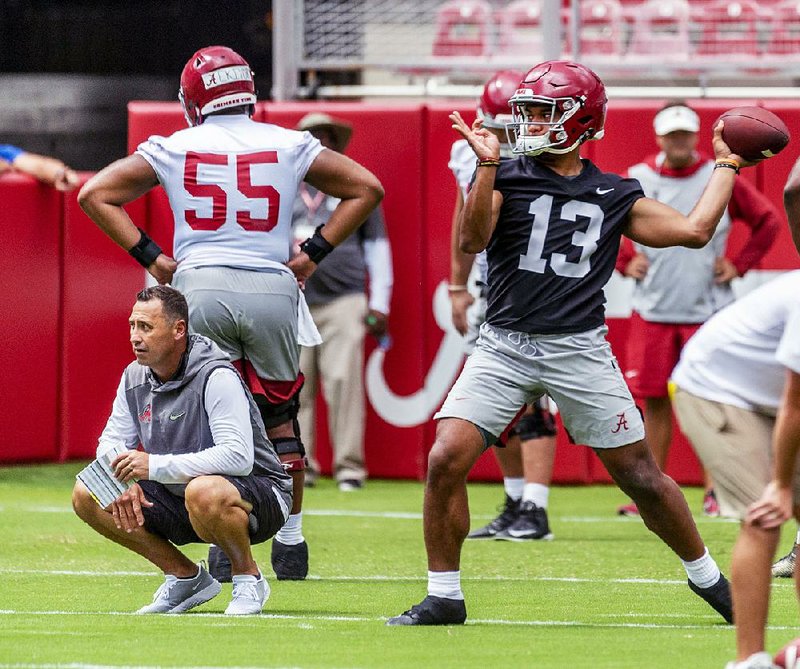 labama quarterback Tua Tagovailoa works through drills during a practice Aug. 3 at Bryant-Denny Stadium in Tuscaloosa, Ala. Alabama has competed in the national title game seven out of the past 10 seasons.

Sonny Dykes has spent most of his career coaching and recruiting football players in his home state of Texas and around the South. When he became a head coach in the Pac-12, he found an unfamiliar environment at some high school games in California.

"Kids have their phones during warmup, and they're Instagramming, tweeting and stuff. On the field, you know, during warmup," said Dykes, who spent four seasons at Cal before returning to his roots to replace University of Arkansas Coach Chad Morris at SMU after the 2017 season. "I look on the sidelines, [and] coaches are on their phones during the game. I mean guys taking phone calls during a high school football game.

"It was a kind of an eye-opener for me at that point. I was just like, 'Wow, this is going to be a little bit different experience maybe than what I was accustomed to in the South, in Louisiana or in Texas.' "

On the business side, college football has become a national enterprise, with comprehensive, multibillion-dollar media deals increasing exposure and a collaborative postseason system designed to crown a true national champion.

But at its foundation, college football is still very much a regional sport across the United States. And because regions tend to go about their football differently, there is a simple explanation for why teams from the South have won national championships in 13 of the past 14 years.

College teams from different parts of the country ostensibly compete for the same top players, but players tend to stay close to home. Those pipelines in the South, spanning from the Carolinas west to Texas, are pumping out rocket fuel.

"It just means more" is not just a slogan in the SEC. It helps explain the current state of college football.

A look at next year's recruiting class tells the tale of a two-decade trend with no end in sight. Recruiting rankings are far from an exact science, but the teams that sign more four- or five-star prospects are the ones that contend for national championships.

According to 247 Sports' composite rankings, there are 343 players currently rated four-star or better in the 2020 class. Of those players, 201 are from states with SEC schools, with Florida (57), Texas (50) and Georgia (32) leading the way.

The Atlantic Coast Conference, which also covers Florida and Georgia, has 127 four and five stars from its states. That includes Washington, D.C., which has four.

The Pac-12 has 50 blue-chip players in its states, 29 from California. That California number is worth watching. It is likely to go up as the 2019 season progresses. But going back to 2002 in 247's player database, Georgia has never had more players rated four stars or better in a year than California, where overall participation in football is dropping at a greater rate than in the other states that produce a similar numbers of players.

So what's going on?

Mild weather throughout the year in the South provides more opportunities for kids to play outside. It's a natural breeding ground for athletes.

"I think there's a development that happens when you're young, like a mentality to compete," said Billy Glasscock, director of player personnel at North Carolina State. "It happens when you're young before you even start playing with your high school team. So many kids have the physical ability, but they don't have the mental ability, so I think that plays a lot into it."

Players from the South are getting far more opportunities to play and practice with their high school teams. Glasscock used Minnesota as an example, where teams play eight regular-season games as opposed to the 10 or 11 across much of the South. Spring football practice and scrimmages are also common across the South; not even Ohio, which traditionally produces the most players among Midwestern states, has spring football.

Recruiters say they typically find more multiple-sport athletes in the Midwest and northern states as kids go from football to basketball to baseball. Or maybe wrestling. Or track.

Coaches and recruiters everywhere talk about how much they love multi-sport athletes, but nothing quite prepares football players like football.

"When your coaches are going out to evaluate in that spring evaluation period, really anywhere north they're not going to see a lot of football practice," said Tyler Barnes, recruiting director at Iowa. "Whereas in the South, they're in full pads just like NCAA football."

The result is more ready-made players being produced in the South as opposed to players who need time in a college program to develop.

"It's religion down there. You see the commitment at the high school level, the community level with resources put into new stadiums, put into hiring the best coaches," said Todd McShane, director of scouting at Northwestern who previously worked at Oregon State and Nebraska.

Vanderbilt Coach Derek Mason, who has worked all over the country, talks about how he guides high school coaches in Tennessee to mimic college programs as best they can.

"Staffs are getting bigger in terms of coaching staff where you can coach your kids very similarly [to college]," said Roc Batten, a former Vanderbilt player who is head coach at Ensworth High School in the Nashville suburbs. "Kids are getting more group and individual attention by the way they're coached, so it allows them to develop even more as well. And when you do that and invest that type of time and energy and -- in some respects you look at facilities -- financially, it creates an exciting atmosphere kids want to be a part of."

That's not unique to the South. There are well-resourced high school football programs all over the country. Some of the very best are in California, such as Mater Dei, which produced USC quarterbacks Matt Leinart and Matt Barkley. But as Dykes discovered, those types of schools are more common throughout the South.

"You'll go to some south Georgia high school that's got 600 kids in it, and they've got four or five kids being recruited to play in the SEC," Glasscock said. 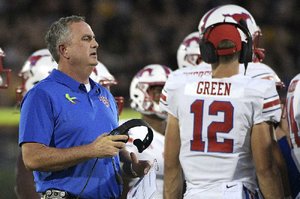 Photo by FR121174 AP
Sonny Dykes, who spent four seasons at California before returning to his roots to take over as coach at SMU when Chad Morris left for Arkansas, said his experience while recruiting in the Pac-12 was different than what he was used to in the South, such as his home state of Texas. 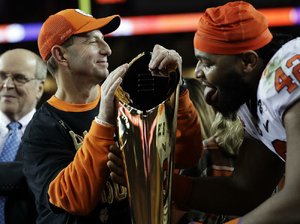 Photo by AP
Clemson Coach Dabo Swinney and defensive tackle Christian Wilkins celebrate after Clemson defeated Alabama in the national title game Jan. 7 in Santa Clara, Calif. Clemson has played for a national title three out of the past four years, winning twice.