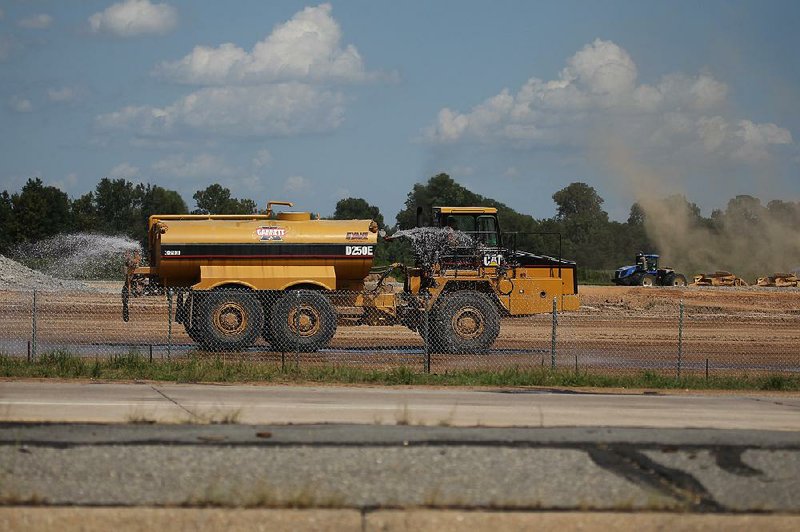 A tanker sprays water last week on the construction site of the Saracen Casino Resort in Pine Bluff. The water is intended to keep the dust down.

PINE BLUFF -- The casino under construction in Jefferson County comes with the usual promise of well-paying jobs, additional tax revenue and a boost in local tourism.

Amendment 100 legalized casino gambling in four locations, including Pope and Jefferson counties, provided there is an endorsement by local officials.

Unlike in Pope County, the road to a new casino in Pine Bluff has been a relatively smooth journey, with only one gaming entity vying for Jefferson County's attention.

In Pope County, five gaming entities -- at least two of which have offered multimillion-dollar enticements -- have competed for the coveted license, which still has yet to be awarded. Lawsuits have been filed over the endorsement issue.

In Jefferson County, the Quapaw Nation of Oklahoma was the only serious contender for the attention of area leaders. And while the offerings of Chairman John Berrey, the elected leader of the Quapaw Nation, were more modest, both Berrey and Pine Bluff Mayor Shirley Washington said efforts were made to ensure the process was not only transparent, but also that it did not cross any legal or ethical lines.

"I don't want to spend a lot of time talking to the U.S. attorney about why or why not we might have cut a check to get a letter [of support]," Berrey said. "I don't have time for that, that's not what we're into, and that's the old way, the way things have always been done. We're just not into doing it the old way. We're into the new way with a commitment to people, to community, a commitment to people of color and other people of Jefferson County to have jobs and to have respect."

Berrey said the Quapaws have always had a more conservative approach to their business dealings.

"We like to keep it right down the middle of the fairway," he said. "Ethically, legally, that's just who we are. We started down this path of [a memorandum of understanding], but we got to talking with people and we realized we didn't need to do anything that might be considered quid pro quo or a payment in kind for a letter of support. We wanted to do this based upon our relationship, our history in Joplin, [Mo.,] and our commitment to be community-oriented and focused. We're not a for-profit business like these Mississippi guys or whatever."

Washington said her first contact with the Quapaw Nation and Berrey came during the push to put the casino amendment on the ballot. The ballot proposal was first pitched in early 2018.

"In my mind," Washington said, "if it had not been for John Berrey and his team and their effort to move the gaming initiative forward ... I don't think it would have happened."

The proposal was placed on the November ballot after supporters gathered enough valid signatures.

After voters approved the amendment, the mayor said, her experience in working with the Quapaws solidified her desire to work with Berrey and his team.

"Some people thought that maybe I should have gone out to seek other tribes or other gaming organizations," Washington said. "I did not do that because I knew that, from day one, we had been working with John Berrey and the Quapaws, and I felt like we owed them that due diligence because I knew where they had started from."

Washington said she first contacted the Quapaws before taking office as mayor, when she was seeking donations for the city's aquatic center, which was then in the planning stages. The aquatic center opened earlier this summer.

That donation, she said, never materialized, but the initial contact led to a relationship that has culminated in the construction of Saracen Casino Resort, which is now underway.

During the beginning phases, when Jefferson County was initially approached by Berrey and his team about building a casino, Washington received a lot of advice from different people regarding what incentives she should try to get from the tribe in exchange for her support, she said.

"When something like this is happening, a lot of stuff starts coming your way," she said. "From all sources, in the state, out of state, Pine Bluff people, Little Rock people, Hot Springs people, everywhere. So I'm not even that politician, I'm that schoolteacher person who's doing the best job I can to work in this position, but I'm serious about Pine Bluff, about doing the best I can for Pine Bluff."

Washington said she was fearful of crossing legal or ethical boundaries if she tried to get the tribe into a situation of a "quid pro quo" with the city to gain her support, and she also feared the repercussions if she overstepped and lost the opportunity to have the casino located within the city limits.

The best way to get some of those needs addressed over the long term, Washington said, was to make sure that Pine Bluff received maximum benefit from the broadened tax base the casino would provide.

The mayor said she reached out to officials in Joplin, Mo., located 11 miles from Downstream Development Casino in Quapaw, Okla. -- also owned and operated by the Quapaws -- and she learned that the economic benefit Joplin receives from the casino is derived mainly from tourism. Because the casino is not located in the city, but is in neighboring Oklahoma, Joplin receives no direct tax revenue from gaming operations.

"I looked at areas where casinos are in town, and they do benefit considerably if they are in the city," she said. "They didn't have to locate in the city. They could have located just out in the county, so my thing was just guarantee me that the land you purchase, wherever it is, that it would be close enough to be annexed into the city limits. That was one guarantee that they made."

Tax revenue for Pine Bluff, once the casino is in full operation, is estimated to be about $10 million annually, Washington said in a recent interview.

Another guarantee that Washington secured from Berrey was that the majority of positions in the casino and resort would be filled by people from Pine Bluff, Jefferson County, the southeast Arkansas Delta region, and the state of Arkansas first, as long as each applicant could meet the requirements for the position sought.

"I wanted a guarantee that there would be jobs, not just of the custodial type or the domestic jobs, but some of the higher-end jobs for our people," she said. "We wanted to make sure someone identified those jobs and the training that would be required for people to do those jobs."

Other concessions guaranteed by Berrey and the Quapaw nation included construction and maintenance of a permanent substation on casino property for Pine Bluff police, fire and emergency services; and a training curriculum to be offered through the University of Arkansas at Pine Bluff and Southeast Arkansas College, a community college.

County Judge Gerald Robinson, who took office in January, said he believes that Saracen Casino Resort will have a positive economic effect on the county and that he has been satisfied with the commitments made by the Quapaws so far.

"I qualify it as them coming in and saying they're going to build a casino, there's going to be jobs for the people of Jefferson County and southeast Arkansas; they're doing that, and they're doing some things in the community," Robinson said. "They are doing the things they said they are going to do, and so far I'm good with it."

Jefferson County Justice of the Peace Ted Harden said he believes the economic benefit to the county will be substantial, once the casino is in operation and the tax revenue begins to flow.

"It'll be several months or maybe even a few years, but I think we'll see a pretty significant economic impact down the road," Harden said.

Pine Bluff City Council member Glen Brown Jr. said he believes the city will benefit from the increase in tax revenue, the additional jobs and the increased tourism, adding that he felt like the mayor negotiated a fair deal for the city.

"I'm not sure what she would have been holding out for. Maybe she thought it would be a good opportunity to introduce new jobs and have more tax revenues coming into Pine Bluff, so maybe she just put that first," Brown said. "I just feel like it's a good opportunity here to have those jobs available and to have that new business open up. You definitely don't want to give them a hard time and make it more difficult for them to open up."

The primary reason the Quapaw tribe had such interest in Pine Bluff, Berrey said, is historical and cultural.

"This is our ancestral homeland," he said. "Our Chief Saracen is buried here. This is where we came from. This is our home."