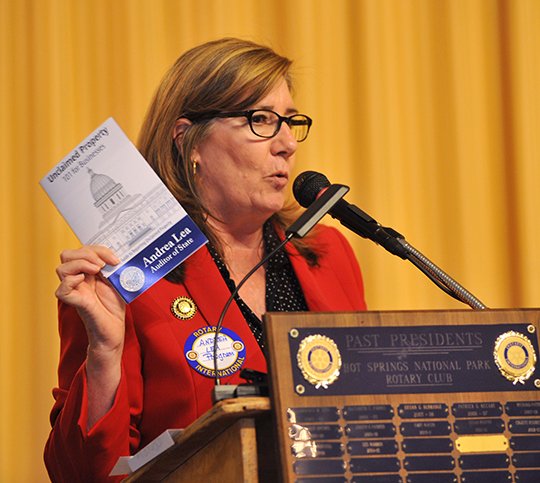 FILE - The Sentinel-Record/Mara Kuhn TREASURE HUNTER: Arkansas Auditor Andrea Lea speaks about the work of the Unclaimed Property Division at the Hot Springs National Park Rotary Club's weekly meeting at the Arlington Resort Hotel & Spa on Sept. 2, 2015. The division's work is known as the Great Arkansas Treasure Hunt because of how much property is abandoned and turned over to Lea's office.

The trustees for the Arkansas Public Employees Retirement System on Wednesday will consider refreshing the system's list of law firms that represent it in class-action lawsuits -- two and a half months after the state auditor bowed out of helping to develop a scoring system for evaluating candidates.

State Auditor Andrea Lea, who also serves as a trustee for the retirement system, decided to extricate herself from helping the system's staff develop the scoring system. She cited work done by one of the firms for her office.

Her decision came shortly after a lobbyist for another firm pointed out to system Executive Director Duncan Baird that Lea's 2014 campaign received contributions from Texarkana attorney John Goodson, his law firm, law partner and his daughter.

Goodson's law firm works jointly with another firm as one of the securities monitoring firms now used by the retirement system. The firms applied to continue working for the system.

In a recent interview, Lea said she was unaware of the text to Baird from lobbyist Rett Hatcher before she decided against helping develop the scoring system.

She said she learned of the text from a reporter for the Arkansas Democrat-Gazette.

Goodson issued a written statement Saturday: "We continue to have a long standing working relationship with APERS dating back as far as 2005. Due to present ongoing litigation on behalf of APERS, we are unable to comment at this time."

[NEWSLETTER: Sign up for the Arkansas politics email at arkansasonline.com/emails]

The two systems are state government's largest, with investments that exceed $17 billion in the teachers system and $8 billion in the employees system.

According to Baird, the Public Employees Retirement System's current securities monitoring firms include:

In mid-January, at Lea's suggestion, trustees decided it was time to refresh their list of firms. The system last hired such firms in 2013.

Baird said the request for qualifications was issued April 15 and that the deadline for applications was April 30.

All of the current firms reapplied except for Spector Roseman Kodroff & Willis.

The employees system's trustees on May 15 had directed the staff to develop a rating system for firms seeking a contract with the agency, and it asked Lea to assist the system's staff.

Lea wrote in an email dated May 29 to Wills that "upon further reflection, out of an abundance of caution, I believe it best for me to bow out of these meetings [about developing scoring criteria] and just vote with the board after you all bring us a list of recommendations."

She said the state auditor's office is working with the Cooper & Kirk and Kessler Topaz law firms on a bonds-recovery case on a contingency-fee basis.

"It's a long term case and no money has crossed hands, and it probably won't get decided in my term [that ends in January 2023], but nonetheless I don't want any monkey wrench in this process," Lea wrote in the May 29 email to Wills.

In a text message to Baird dated May 16, Hatcher circled campaign contributions on one of Lea's 2014 campaign finance reports for the primary election, noting donations of $2,000 apiece from John Goodson; Goodson's law partner, Matt Keil; the Keil & Goodson law firm; and Goodson's daughter Wesley Goodson. Keil & Goodson also contributed $2,000 to Lea for the general election, according to her campaign finance reports.

Hatcher also noted that the Nix Patterson law firm and the Keil & Goodson law firm jointly submitted their qualifications to continue to be employed by the retirement system.

His text message to Baird was obtained by this newspaper in a public-records request under the Arkansas Freedom of Information Act.

Asked about his text, Hatcher said in a written statement, "I brought it to Duncan Baird's attention because I know Duncan is a friend of mine and of Auditor ... Lea and I felt like it was Duncan's place as Executive Director to bring these issues up and resolve them and he told me he didn't think it was his place, and so we disagreed."

Hatcher referred to an article in this newspaper in 2016 about Lea's former chief of staff, George Franks, alleging that Lea didn't consider a Missouri-based law firm, known then as Walters Bender Strohbehn & Vaughan, with expertise in savings bonds for an estimated $160 million legal case.

According to Franks, Lea had a recommendation from a major contributor -- Goodson -- for the Cooper & Kirk and Kessler Topaz law firms to represent the state.

In response to Hatcher's remarks, Baird said Friday: "Jay Wills was designated in the [request for qualifications] as the sole point of contact. For that reason, I said that anyone with concerns about the process should contact Jay directly."

Lea said she "was surprised and frankly a bit sad" about Hatcher's text message to Baird.

"Rett has been a long time friend who worked hard to help me get elected to this office, and our families have mutually supported each other. If he had any concerns, I would have expected he would have come directly to me," said Lea, a former Republican state representative from Russellville.

Baird is himself a former lawmaker. The Republican was a representative from Lowell from 2009-15 and then worked for Hutchinson. He was hired as the retirement system director in January and started work in April.

Other former lawmakers have connections to securities monitoring firms:

• Former state Sen. Michael Lamoureux, R-Russellville, who is Hutchinson's former chief of staff, exchanged text messages with Baird on April 9-10 in which he said he is representing the Kessler Topaz law firm.

In a text to this newspaper last week, Lamoureux said he is not a lobbyist for Kessler Topaz.

"The law firm I work [for] works on cases jointly with them," he said, adding that he is counsel at Keil & Goodson.

Lamoureux said he had no comment about Hatcher's text message to Baird.

• The Perimeter Group, which includes former Reps. Tommy Wren, D-Melbourne, and Ernest Cunningham, D-Helena, represents the Rosen Law Firm, according to the secretary of state's office.

The trustees for the Arkansas Public Employees Retirement System include seven appointees of Hutchinson. The board of trustees also includes Lea and Republican state Treasurer Dennis Milligan.

"I do make appointments to the APERS board, but I expect them to manage the retirement funds and the system based upon their good judgment and business skills," Hutchinson said Friday in a written statement.

"I have not expressed any views to any board member on who should be selected as the securities monitoring firm, nor am I aware of the list of firms that are under consideration." 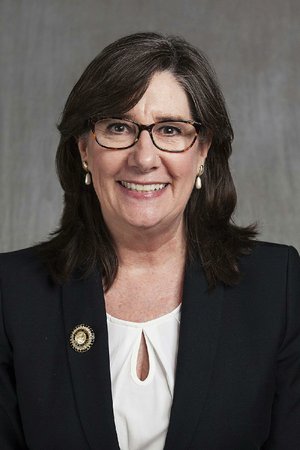 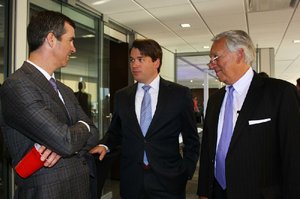 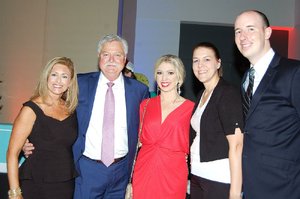 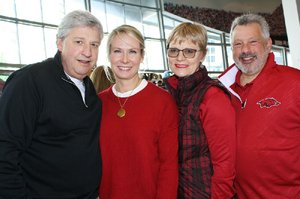 John Goodson and Arkansas Supreme Court Justice Courtney Hudson Goodson of Texarkana with Del and Jim Coleman of Fayetteville, the UA's new provost and vice chancellor for academic affairs at the Hog Wild Tailgate party Dec. 29 at the NASCAR Hall of Fame, held ahead of the Belk Bowl in Charlotte, N.C.