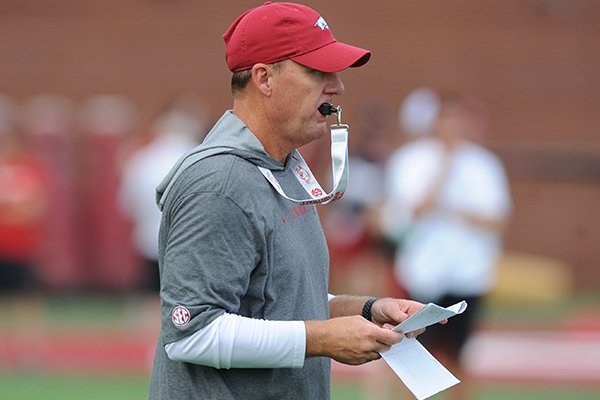 FAYETTEVILLE -- At least from the beginning of Arkansas' Frank Broyles-coaching era in 1958 through all his coaching successors he hired from 1977 through 2007, media watched nearly all Razorbacks football practices.

Then late in his tenure, Houston Nutt turned practices into a scene from Airplane II.

If you haven't seen the 1982 comedy movie still surfacing on TV, the scene referred showed security aggressively frisking little old ladies against a wall while terrorists bearing bazookas marched unimpeded past the X-ray.

Kind of like if concealed weapons been allowed at Razorbacks games while adhering to the SEC's umbrella ban.

The Nutt-created scene similar to Airplane II stemmed from media after watching the initial practice periods ushered out while prominent boosters remained. The boosters often spread information, or too often misinformation, on message boards and such.

Post-scrimmage Saturday, Morris was asked by media about injuries.

He replied, "Health standpoint, I think we're all right. We had a couple of guys get a little banged up. Nothing major."

Morris had no cause to hide a season-ending injury two weeks before the Aug. 31 season opener. So give him benefit of the doubt about obfuscating intentionally. It was a long scrimmage. He likely forgot all who were hurt and the injuries' severities couldn't by then be fully ascertained.

But had media attended, somebody would have asked a memory-jarring question. So Morris wouldn't have quotes sprouting Pinocchio's nose.

To Nutt's credit, he remains the last Arkansas head football coach availing himself to media after every practice and then allowing media to interview players and assistants.

It led to some UA embarrassments.

Bobby Petrino, incisive when media did get to interview him and actually holding more open practices than have his successors, left offensive coordinator Garrick McGee instructed to duck media questions even as thousands saw running back Knile Davis carted off during an open scrimmage.

Whether from Petrino's infamous UA end by lies to the heat exerted on former UA Chancellor John White urging UA employees not to answer media's questions but like the question you prefer asked, the UA should learn a lesson it apparently still hasn't.

Shielding itself from media only drives stakes through its credibility's heart.