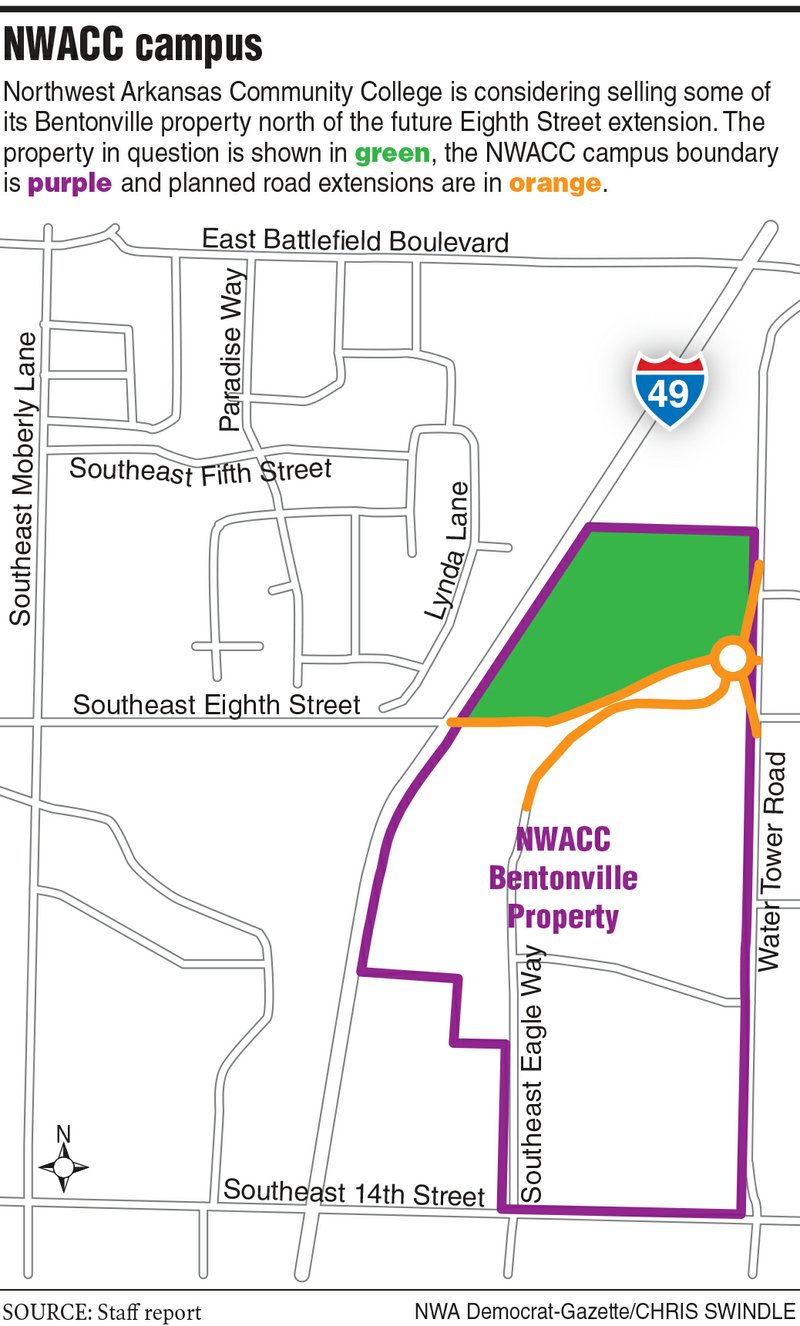 President Evelyn Jorgenson said she recently received a call from a real estate firm representing a client interested in buying the northern 20 acres of the college's 131-acre Bentonville campus.

The 20 acres is undeveloped and eventually will be separated from the rest of the campus when the city completes an extension of Eighth Street from Interstate 49 on the college's western boundary to Water Tower Road on its eastern boundary.

Jorgenson discussed the matter with the board of trustees at its meeting last week, seeking the board's approval to pursue further talks with the real estate firm. No board members objected, although Chairman Joe Spivey urged caution, saying Northwest Arkansas' rapid population growth should be considered.

"This college is going to continue to grow in terms of students attending college on a physical campus," Spivey said.

Jorgenson referred to the facility master plan, which shows the college has enough space to build at least four more buildings south of Eighth Street, the same side as the rest of the college's buildings.

"I show you this because what you first realize is just how much land we do have, how much building opportunity we do have, even if we stay south of Eighth Street," Jorgenson said. "I think that's important to recognize."

Speculating as to what the 20 acres is worth, Jorgenson threw out a ballpark figure of $8 million-$10 million. She called that a "wild guess," adding the college still needs to get the land appraised.

She said the land north of Eighth Street will become practically useless to the college once the extension project is complete.

"I don't think we would ever want to have students try to go across a five-lane road to get to any kind of additional space north of Eighth Street," she said.

The city is in the land acquisition phase of the Eighth Street extension project and is negotiating with the college for the land it will need to connect Eighth Street to Water Tower Road, said Debbie Griffin, Bentonville's community relations and economic development director. The city hopes to begin construction next year, she said.

Jorgenson also noted an increasing number of college students nationally are choosing to take their classes online, diminishing the need for additional facilities. Some in the higher education community believe colleges eventually will deliver as much as 75% of classes online, she said.

"There's a great deal of reason to believe that," Jorgenson added.

The college also owns 20 acres next to Arvest Ballpark in Springdale, where construction of its Washington County Center is underway. That building is scheduled to open in January and will replace three spaces the college leases in Washington County.

Todd Schwartz, board vice chairman, suggested the college should retain all of its Bentonville land and reserve it for facilities dedicated to workforce development.

"I don't want to be in the same situation we had in Washington County where we had buildings in three different locations," he said.

Ted Viala, executive broker with Lindsey & Associates, does most of his work in Bentonville and Rogers.

"It's a hot market right now," Viala said. "The land values are doing nothing but increasing."

Viala, who said he's not the person who contacted Jorgenson about the land, speculated whoever's interested in it probably wants to build some type of office park or apartment complex.

Asked about Jorgenson's estimate of $8 million-$10 million for 20 acres, Viala said that seemed "a little extreme" but added he'd have to do more research to better address that question.

There has been recent commercial development in the area. A Diamond Wash carwash and a Slim Chickens restaurant opened within the past year directly across from the college on Southeast 14th Street.

A new interchange at Eighth Street and Interstate 49 is likely to encourage further development. Spivey mentioned Walmart's plan to build a new headquarters on 350 acres on the east side of the interstate from the college.

"I would imagine the value of the real estate is going up considerably in coming years," Spivey said.

How much of the 20 acres will be needed for right of way to widen the road is unknown, according to Lisa Anderson, the college's executive director of planning, effectiveness and public relations.