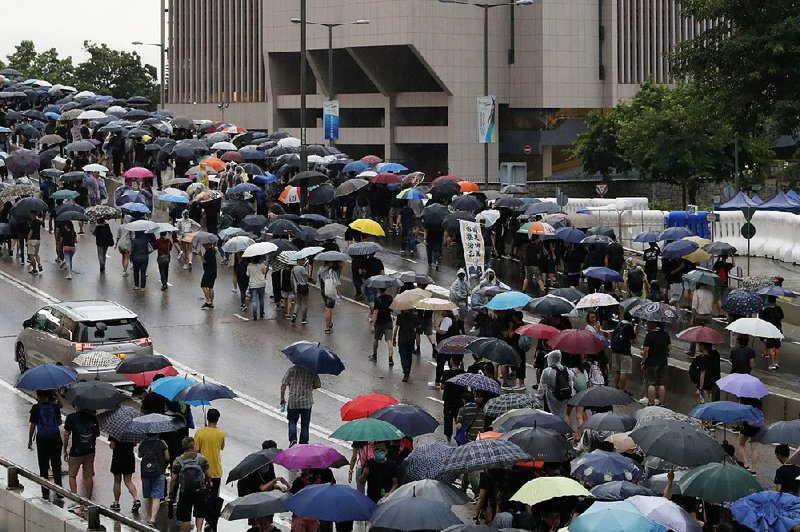 Pro-democracy protesters fill a major road in Hong Kong on Sunday as they march in the rain. More photos are available at arkansasonline.com/819hongkong/.

Organizers said at least 1.7 million people participated -- more than one in five of Hong Kong's 7.5 million residents. The police estimate was 128,000 people, though they only counted the turnout during a designated time period at Victoria Park. Police had approved the rally within the park but denied permission for a march.

No violence was reported during the demonstration, making for a rare calm weekend in a protest movement that has been marked by violent clashes with police. Law enforcement officers kept a low profile, with no riot police seen from the procession's main routes.

Demonstrators who have turned out this summer to oppose Hong Kong's extradition bill to China -- which they see as a threat to Hong Kong's rule of law -- have classified themselves into two groups: "the valiant," who clash with police, and "the peaceful," who support tactics such as rallies and marches.

On Sunday, demonstrators said it was time for the valiant to compromise and support the peaceful.

When demonstrators shined laser pointers at a government building, attempting to temporarily blind anyone inside and disrupt facial recognition cameras, they were persuaded to leave, prompting applause from others in the group. When stragglers convened outside a government complex in the late evening, other protesters urged them to go home.

"We hope to see whether the government gives a response to this peaceful protest," said Michael Leung, 24, who was ushering his fellow demonstrators away. "If we get a negative response, we cannot control the next [gathering]."

Organizer Bonnie Leung of the Civil Human Rights Front, which had organized three previous marches in Hong Kong since June, said earlier in the day that "we hope we can show the world that Hong Kong people can be totally peaceful."

A protester named Ray, 26, said he was valiant but still supported a nonviolent protest.

"We never thought these rallies were useless. We think it's the most powerful way to express ourselves, because we can get millions of people and get our voice out globally," said Ray. He, like other protesters who have clashed with police, declined to give his full name to shield himself from official retribution.

Another self-identified valiant protester named Kelvin, 28, said he thought nonviolence was useless, but that he joined the rally in hopes that larger numbers might exert some pressure on the government.

The demonstrators so overcrowded the area that public transit trains did not stop at stations near the assembly.

At one of those stations, Francis Woo, 35, stood on a platform and sent texts to a group of 259 people on WeChat, the mainland Chinese messaging app. Most of the people in the group were from mainland China, sending encouragement and asking for information.

"There's only one voice in their news, and it doesn't make sense," Woo said, referring to Chinese state media, which has blocked reports of peaceful rallies in Hong Kong while amplifying scenes of confrontation between protesters and police.

Woo said it was the eighth version of this WeChat group after seven previous ones were shut down.

Iu said she hoped to bridge divisions between demonstrators and Hong Kong residents who say the protests are creating instability.

"Most importantly, we're not going to take revenge on the police. We know that police are the middleman for the government and the people," she said. "We're fighting for democracy and freedom for everyone in Hong Kong."

You called the lawmakers' comments "a gross violation of the spirit of the rule of law, a blatant double standard and a gross interference in China's internal affairs."

You did not mention any specific lawmaker, but numerous members of the U.S. Senate and House -- including Speaker Nancy Pelosi, D-Calif. -- have affirmed the U.S. commitment to human rights and urged Hong Kong's government to end the standoff.

House Minority Leader Kevin McCarthy, R-Calif., tweeted last week to Hong Kong residents that "we see you waving the American flag, and we hear you singing our national anthem," prompting accusations that he was giving China an excuse to accuse the U.S. of meddling in the region.

Congress has the power to pass legislation affecting Hong Kong's relationship with the United States in ways that could further erode the territory's reputation for stability and rule of law. That includes the recent reintroduction of the Hong Kong Human Rights and Democracy Act in Congress, which would among its other provisions require the secretary of state to issue an annual certification of Hong Kong's autonomy to justify special treatment afforded to the city.

More directly, President Donald Trump could simply issue an executive order suspending Hong Kong's special trading status with the U.S., a move that could have a devastating effect on the local economy.

A former British colony, Hong Kong was returned to Beijing in 1997 under the framework of "one country, two systems," which promised residents certain democratic rights not afforded to people in mainland China. But some Hong Kong residents have accused the Communist Party-ruled central government of eroding their freedoms in recent years.

Members of China's paramilitary People's Armed Police force have been training for days across the border in Shenzhen, including on Sunday morning, fueling speculation that they could be sent in to suppress the protests. The Hong Kong police, however, have said they are capable of handling the demonstrations.

Information for this article was contributed by Kelvin Chan, Yanan Wang, Ken Moritsugu, Yves Dam Van, Phoebe Lai, Dake Kang and Christopher Bodeen of The Associated Press; and by Alice Su and Ryan Ho Kilpatrick of the Los Angeles Times.