Safe Haven Baby Box to be installed in Benton 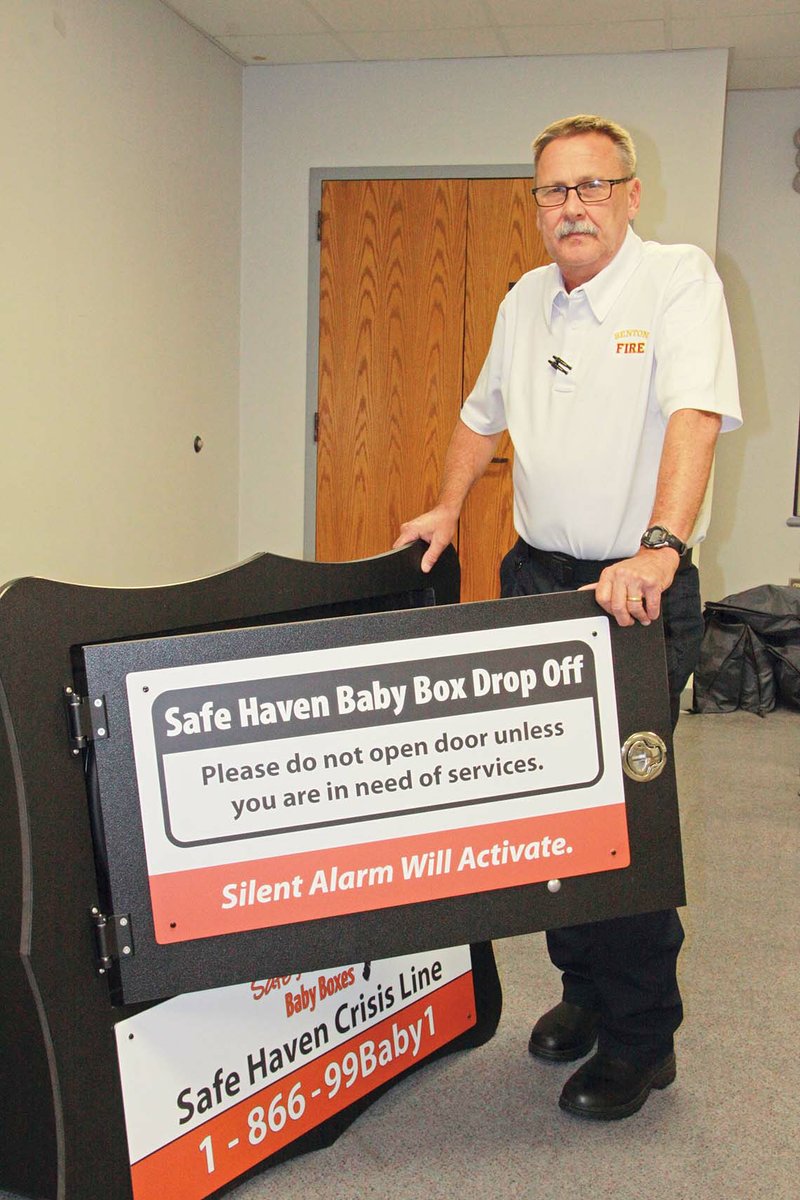 BENTON — The Benton Fire Department will be the first emergency-services agency in Arkansas to have a Safe Haven Baby Box installed.

Bill Ford, chief of the Benton Fire Department, said that this year, legislation was passed to allow fire departments to be added to the Safe Haven Law. He said that in years past, the law included only hospitals and police departments.

“The Safe Haven law was passed back in 2002 or 2003, and if a woman wanted to choose not to abort a child but wanted to give it up, she could give up her child, no questions asked, if it’s younger than 30 days old,” Ford said. “This year, the fire departments were added to the Safe Haven law.”

Ford said Fire Department officials talked to Rose Mimms, with Arkansas Right to Life, and inquired about the baby box. He said they plan to have it installed by the end of the month and for it to be operational by the middle of September.

“One thing about the baby box that needs to be understood is that it is a last resort,” Ford said. “It’s best, if a woman wants to give up her child, that she hand it off to someone at a hospital or a police or fire department.

“They don’t have to give their identity or anything like that, but the baby has to be younger than 30 days old. They aren’t subject to prosecution for abandonment if they give the baby up like that.”

Ford emphasized that the baby box is a final legal alternative, and it “prevents that person from discarding that child.”

“You hear it all the time, in news articles and on TV, like how one baby in Georgia was found in a plastic bag, still alive — luckily, it was alive,” Ford said. “I read about it all the time. This baby box keeps the baby from being abandoned or thrown away like a piece of trash.

“This is the final option.”

Ford’s wife, Judy, worked at Southwest Regional Medical Center in Little Rock, now closed, and she once found an abandoned baby in a bathroom in the hospital. Ford said she was working at the hospital when she found the baby, but this was prior to the Safe Haven law.

“We have gotten all kinds of questions from people, like ‘Why are we doing this?’ but the answer is simple, if we can save one life or save one baby from being discarded, it has paid for itself over and over,” Ford said. “We don’t like having something like the box. It is ludicrous to even think about something like this, but the thing is, it is the world we live in.

“If we can use this as a last option, it is better than a child dying.”

The baby box will be installed at the fire station on Edison Street in Benton. Ford said Station No. 3 was picked because it affords easy access and allows some anonymity.

“The station was provided a certain amount of anonymity because there was no camera on it or anything,” Ford said. “They can pull up, open the door and leave — it is pretty private.

He said that when a child is placed in the ventilated box, there is an alarm in it, and it will notify the communications center for the department, and the door is sealed.

“Once the child is placed into the box and the door is shut, it cannot be reopened from the outside,” Ford said. “If a parent has second thoughts after they put the child into the box, they will have to go through the Department of Human Services to get the child back.”

Ford said that once the child is put into the box and “we retrieve the baby, then we will render any aid if needed and notify an ambulance if needed.”

“From there, the baby is turned over to the proper authorities to be taken care of,” he said.

Ford said the cost of the construction of the box is an estimated $5,500, but the installation cost varies. He said it depends on the type of construction and the connection for alarms. The boxes are made by Safe Haven Baby Boxes, a national organization that was founded by Monica Kelsey, who visited Benton recently to help bring the boxes to the area.

“But it has been paid for through private donations, and organizations like Right to Life, the Knights of Columbus and various churches donating money and private citizens donating money,” Ford said. “It is being installed with no cost to the city of Benton, and it is the first in Arkansas.”