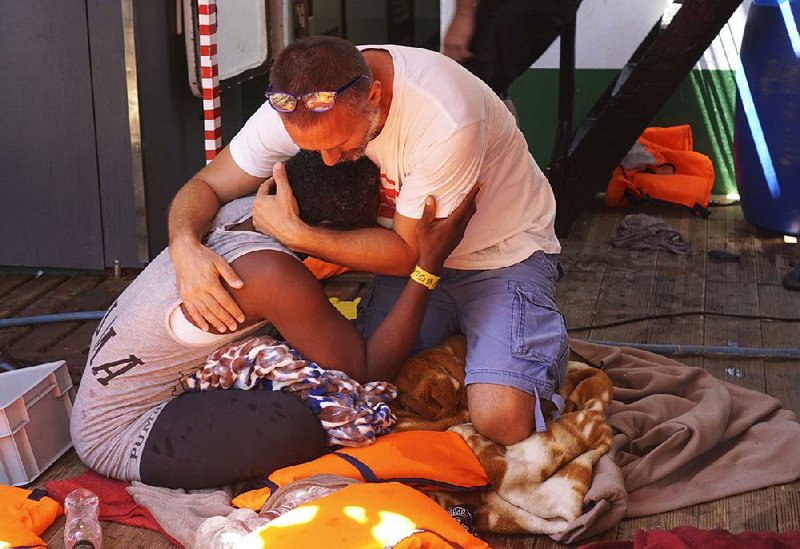 A migrant is comforted Sunday by a crew member of the Open Arms humanitarian ship, which has been anchored off the Sicilian island of Lampedusa in southern Italy.

ROME -- Several migrants jumped into the sea from a Spanish rescue ship Sunday in a thwarted bid to reach shore in Italy, as the aid group operating the vessel said the situation had become a "full humanitarian crisis."

"We have been warning for days, desperation has its limits," said Open Arms founder Oscar Camps, who released a video showing four migrants wearing orange life vests and swimming toward Lampedusa, an Italian fishing and vacation island between Sicily and northern Africa. Crew members from the humanitarian group's ship swam quickly toward them so they could be taken aboard again.

The Italian government's interior minister, Matteo Salvini, has refused to let the 107 passengers disembark. Open Arms said the passengers' psychological and physical conditions are "at risk" after more than two weeks aboard the vessel.

The ship picked up the migrants, most of whom are African, on Aug. 1 off the coast of Libya. There were 147 migrants aboard when the ship reached Italian waters. In the past few days, 40 migrants have been transferred by Italian coast guard vessels to Lampedusa, including a few who were ailing and 27 believed to be minors.

The migrants who remain on the ship have lived on its deck and shared its two bathrooms.

Open Arms told Italian authorities, including prosecutors, that the situation aboard "has become unmanageable," adding that the migrants are "prey to frequent anxiety and panic attacks."

"If the worst happens, Europe and Salvini will be responsible," the charity said in a tweet.

Salvini contended that Open Arms was staying anchored off Lampedusa "just to provoke me and Italy."

At least six European nations have offered to take some of the migrants if the ship is allowed to dock. Olivier Gerstle, a spokesman for the French interior minister, said Sunday that France had offered to take in 40 migrants as part of a distribution agreement.

And Spain announced that it would allow the ship to dock in the southern port of Algeciras, about 950 nautical miles away.

Acting Prime Minister Pedro Sanchez acknowledged that the port near the Strait of Gibraltar is distant and unsuitable to disembark so many migrants, but he is making the offer given the "emergency situation" facing the Spanish vessel, his government said in an emailed statement Sunday.

"The inconceivable reply from the Italian authorities, and specifically of the Interior Minister Matteo Salvini, to close their ports, and the difficulties expressed by other countries in the central Mediterranean have led Spain to once again lead the reply to a humanitarian crisis," the government said.

But the ship's captain, Marc Reig Creus, asked to transfer the 107 migrants onto another, "adequate" ship first, saying his vessel would take almost a week to make the journey and that neither the ship nor the migrants could handle such a trip.

A spokeswoman for Open Arms, Laura Lanuza, said undertaking such a long voyage on the aid ship would be "crazy."

"There is anxiety, bouts of violence, control is becoming increasingly difficult," she said. "To embark on a six-day sailing with these people on board who are at the very limit of their possibilities would be crazy. We can't put their health and lives at risk."

Salvini earlier Sunday declared victory when Spain offered to take the ship, but when Open Arms contended that the trip was impossible because of the vessel's condition, he tweeted that the group's response was "incredible and unacceptable."

Salvini has denied permission to dock because he contends that charity rescue ships essentially facilitate the smuggling of migrants from the traffickers' base in Libya. Similar standoffs in the past have ended with disembarkation either ultimately taking place in Italy or elsewhere in Europe.

Salvini's party, the League, also blames migrants for crime, and the League's popularity among voters has been soaring.

The interior minister is challenging Italy's populist government, even though the League is the government's junior coalition partner. On Tuesday, Italian Premier Giuseppe Conte will address the Senate, where Salvini's party is pushing for a no-confidence vote against him. If Conte resigns, then it could pave the way for an election in a couple of months, and Salvini is angling for the premiership.

Open Arms contended that Salvini is using the 107 migrants for "xenophobic and racist propaganda."

Despite Italy's tough stance, Africans are continuing to try to make the journey. Libya's coast guard said over the weekend that it intercepted 57 Europe-bound migrants off the country's Mediterranean coast.

Coast guard spokesman Ayoub Gassim said a wooden boat carrying 53 Ethiopian migrants, including 17 women and nine children, and four Egyptian migrants was stopped Saturday off the coastal town of Zawiya. The town is about 30 miles west of the capital, Tripoli.

Gassim said the migrants were given humanitarian and medical assistance before being taken to a detention center in Zawiya.

Libya's coast guard said it has intercepted 577 migrants at sea this month. The country has emerged as a major transit point for migrants heading to Europe after fleeing war and poverty in Africa and the Middle East.

Information for this article was contributed by Frances D'Emilio, Aritz Parra and staff members of The Associated Press; by Anna Momigliano and Raphael Minder of The New York Times; and by Charles Penty, Ania Nussbaum and Vernon Silver of Bloomberg News. 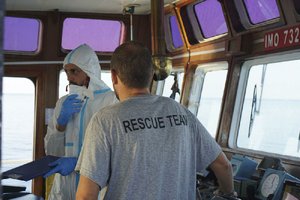 Photo by AP/FRANCISCO GENTICO
A Ministry of Health worker speaks with a crew member of the Open Arms Spanish humanitarian boat on Sunday.