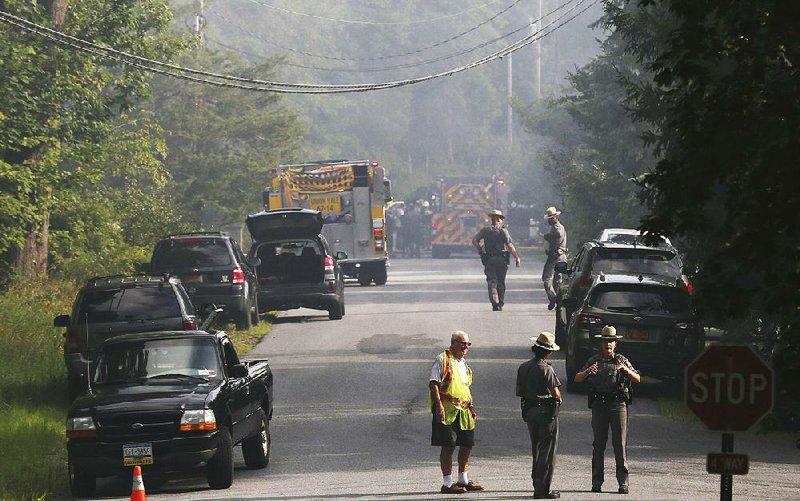 Police close off a road Saturday as rescue workers respond to the plane crash in Union Vale, N.Y.

UNION VALE, N.Y. -- A plane crashed into a New York home Saturday, killing one resident and one person on the aircraft and causing a huge fire, state police said.

The National Transportation Safety Board is to determine why the Cessna 303 plunged about 4:30 p.m. in the rural town of Union Vale, 15 miles southeast of Poughkeepsie.

State police spokesman Steven Nevel said three men were on the plane; one died and two were injured. Of three people in the home, one died, another was seriously hurt and the third is missing.

The names of the victims were not being released until family members were notified, the state police spokesman said.

White House economic adviser Larry Kudlow on Sunday confirmed that President Donald Trump's administration is exploring trying to buy the country of Greenland, noting that the self-governing country is a "strategic place" that is rich in minerals.

"It's developing. We're looking at it," Kudlow said on Fox News Sunday. "Denmark owns Greenland. Denmark is an ally. Greenland is a strategic place ... I'm just saying the president, who knows a thing or two about buying real estate, wants to take a look."

Trump's desire to buy Greenland, which is part of the kingdom of Denmark, was first reported last week by the Wall Street Journal. Two people with direct knowledge of the directive told The Washington Post that Trump has mentioned the idea for weeks, and aides are waiting for more direction before they decide how seriously they should look into it.

Trump is scheduled to visit Denmark in two weeks. In the days since news of Trump's interest in Greenland broke, the idea has been ridiculed by politicians in Denmark, and Greenland's Ministry of Foreign Affairs said Friday that the island is not for sale.

SACRAMENTO, Calif. -- The city of Sacramento has filed an unusual lawsuit to ban seven men considered to be a "public nuisance" from a popular business corridor.

The lawsuit alleges the men are "drug users, trespassers, thieves ... and violent criminals" who have illegal weapons and ammunition and have forced police to dedicate an "excessive amount" of resources to the Broadway corridor.

The suit includes declarations from local business and property owners, who claim they have been threatened.

Alcala Wood said in a statement Sunday such lawsuits are not appropriate in every situation, but this case warrants legal action. She said this type of lawsuit will only be filed with the neighborhood's support.

The suit is filed against Sean Conner, Michael Dibiasio, Dimitriy Gologyuk, Troy Green, Kelvin C. Peterson, Joseph Soto and Kenneth Whitlock. Some of the men are believed to be homeless, and efforts to reach them Sunday were unsuccessful. It also wasn't known if they had lawyers who could comment on their behalf.

A man stands with a rifle, shooting into the dark. Sirens and screams can be heard in the background of the video posted to Instagram.

"Police identified the Youngstown Jewish Family Community shooter as local white nationalist Seamus O'Rearedon," the caption says. The geolocation on the Instagram video was set to the Jewish Community Center of Youngstown, Ohio.

The attack never happened, but police in New Middletown, Ohio say they apprehended the man who made the threats -- a self-described white nationalist with a significant arsenal.

On Saturday, police arrested the alleged owner of the Instagram account, 20-year-old James Patrick Reardon, on charges of telecommunications harassment and aggravated menacing. The day before, authorities searched the New Middletown home of Reardon's parents, according to WFMJ, and seized a cache of weaponry, including knives, two assault rifles and a large amount of ammunition, as well as a gas mask and bullet-resistant armor.

The FBI said in a statement Reardon was being held on "local charges," and that more details could not be released because it's "an ongoing investigation." Police in New Middletown did not respond to a request for comment. 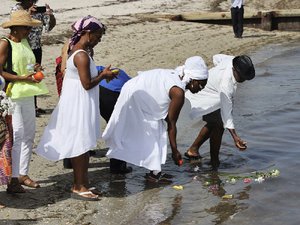 Photo by AP/Miami Herald/CARL JUSTE
People gathered at Virginia Key Beach Park in Miami place offerings Sunday in remembrance of ancestors who perished on the journey aboard slave ships. Events are planned across the country to reflect on the 400th anniversary of the start of the slave trade in America.