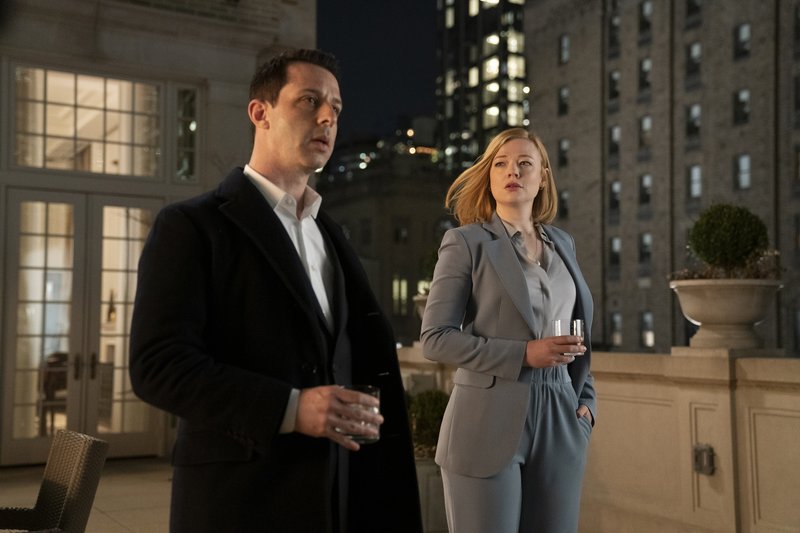 Jeremy Strong, left, as Kendall Roy and Sarah Snook as Shiv Roy in "Succession." (Photo by Peter Kramer via HBO)

Having wormed its way into prestige television's fragile psyche, HBO's shrivel-hearted drama Succession returned Aug. 11 as the show one loves to detest, or detests oneself for loving, or something in between.

Plenty of people savor Succession on its own narrative terms — even if those terms remain tricky to pin down. They say the show is meant to be a form of satire. Others say you're supposed to enjoy it as a vicarious eat-the-rich fantasy, with side servings of anti-corporate Schadenfreude, even though the show has yet to provide any evidence that the rich ever lose.

The show is its own kind of puzzler, and I probably tried too hard to solve that puzzle last year when tasked with reviewing the first half of Season 1, where I found myself alienated by the masochistic display of bitter greed. Succession (created by Jesse Armstrong) arrived just when I sensed that HBO had too many shows about the haves and only a passing interest in the have-nots. Charles Dickens, it ain't, but perhaps Succession is meant to just sort of happen to a viewer who dares to enjoy it, as abstractly painful as checking one's 401(k) balance after a trade war.

Despite its gloom, Succession, which is up for best drama series at this year's Emmy Awards — Sept. 22 on Fox — is extremely watchable and about as easy to ignore as a hangnail. In addition to its Didion-esque ability to illuminate the subtle evils along its margins, the show simmers with vile dialogue, spat and hurled among a family of 1-percenters, the Roys, who own a Murdochian media conglomerate, Waystar Royco, that includes an influential, conservative cable news channel. The patriarch, Logan Roy (played with Shakespearean fearsomeness by Brian Cox) is tormented by an unsolvable crisis: None of Logan's adult children strike him as worthy or tough enough to inherit control of the company.

Season 2 picks up in the forlorn wake of the wedding between Siobhan Roy ("Shiv" to her ostensibly loved ones, played by Sarah Snook) and her conniving yet dense husband, Tom Wamsgans (Matthew Macfadyen, a show standout).

Shiv's older brother, the now utterly broken and defeated Kendall (Jeremy Strong), is yanked out of a tony spa rehab to lend credence on the business channels that his father's empire remains strong. Yet, behind the scenes, Kendall knows (and the viewers know) that his standing with his father has rolled to the bottom of the hill after a messy (and fatal) incident at Shiv's wedding required Logan to call in his security team to cover it up.

Kendall's out; Shiv's in (or so Logan leads her to believe) and, of course, there's always their slippery, soul-perverted kid brother, Roman (Kieran Culkin), still awkwardly angling for Logan's attention. Another brother from a different mother, Connor (Alan Ruck), is a trust-funded New Mexico space case who, to the family's chagrin, declares himself a presidential candidate, running on an anti-tax platform.

A central plot this season involves Logan's scheme to buy, for some $25 billion, his nearest competitor and bitterest rival — PGM, which is controlled by the liberal Pierce family, who value the integrity of their news operation above all else. Logan fumes at his children and top board members when they question his obsession with PGM and his determination to double down on a future in media. Shiv puts it best when she voices her objection to her father's quest: If Waystar devours PGM, where will she (and presumably the rest of America) get reliable news?

In addition to providing some delectable guest roles for the likes of Holly Hunter (as PGM's chief executive) and Cherry Jones (as the Pierce family's shrewd matriarch), Waystar Royco's bid for PGM also serves as a nice, metaphorical stress-release valve for our ol' rich friend HBO, which is now finding its way through the past tense of mergers-and-acquisitions (merged, acquired), on the strength of such confounding yet compelling fare as Succession. 

But the real allure here, ultimately, has little to do with business. Less a Billions and more of a Six Feet Under, the show draws on the strengths of its ensemble cast to dig deeper into their personal problems, peccadillos and lasting emotional scars. When you take away the Long Island summer palace, the Hungarian hog-hunting excursions and the private helicopters, what sort of family is this really?

Flashbacks are too often a fallback, but if any show ever cried out for little-remembered personal histories, it would be this one. The opening credits play around with the notion of old family film reels (it looks too old, in fact, to be of Kendall, Shiv or Roman, who would have been born into the camcorder era), suggesting a scratchy archive of repressed feelings that goes back farther than the children know.

Yet a flashback scene would also seem to run counter to Succession's truest mood, a forward-momentum nihilism that discourages any idea that there is love to be excavated here. Along with that, Succession prizes nothing more permanent than the day's closing stock price and a running tally of who's up and who's down. It's a big show that resists direct comment on the big issues of the moment — the wealth gap, the Trumps, the 21st century. Instead, it's an iteration on a much, much older story, about money and the corrosion of the soul.