With panel's OK, eye-care issue clears one hurdle for 2020 ballot 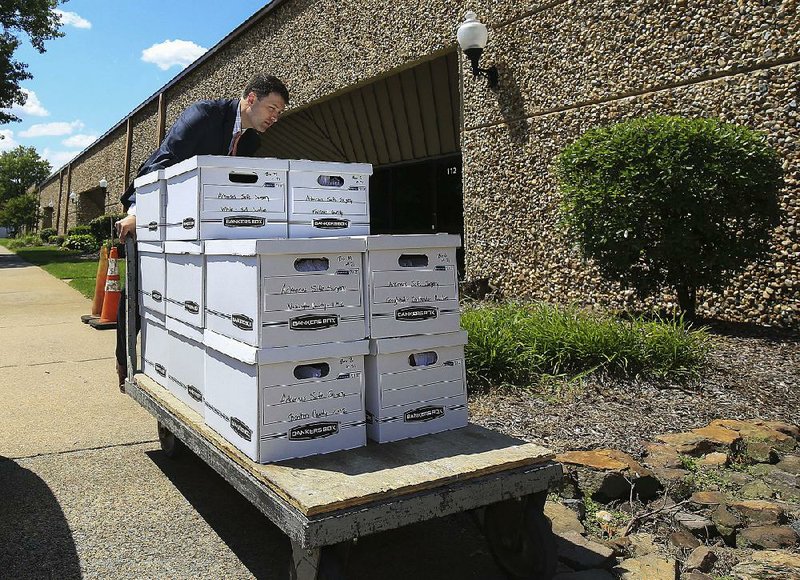 FILE — Alex Gray, an attorney for the Safe Surgery Committee, delivers petitions with more than 84,000 signatures to the secretary of state’s office in a bid to refer a new optometrists law to the people to vote on in 2020.

The Arkansas Board of Election Commissioners on Monday signed off on the ballot title and popular name of a proposed referendum on the fate of a 2019 state law that allows optometrists to perform a broader range of surgeries.

In a voice vote, with Chairman and Secretary of State John Thurston not voting and with no audible dissenters, the seven-member board heeded its staff's recommendation to certify the title and popular name as meeting the standards of state law.

The decision marked the first time that the board has considered certifying a proposed ballot measure's popular name and ballot title under Act 376 of 2019, which shifted that responsibility from the attorney general to the election commissioners board.

The proposed popular name is "An Act to Amend the Definition of the 'Practice of Optometry.'" The ballot title is a longer description of the proposed referendum to have voters decide whether Act 579 of 2019 lives or dies. The law allows optometrists to perform some procedures previously limited to ophthalmologists and other eye specialists.

The board's certification of the ballot title and popular name satisfies one of the two requirements for a proposed measure to get on the ballot under state law.

The other requirement is for the secretary of state to certify that the sponsor has submitted enough valid signatures of registered voters to get the proposed referendum on the ballot, which the measure's sponsor wants the Arkansas Supreme Court to compel Thurston to do.

Thurston's office concluded Aug. 2 that the sponsor failed to submit enough valid signatures of registered voters to qualify the proposed referendum for the Nov. 3, 2020, ballot. The petition needed 53,491 signatures but had only 23,953, according to Thurston's office.

The measure's sponsor -- the Safe Surgery Arkansas committee and its chairwoman, Dr. Laurie Barber of Little Rock -- has challenged the Republican secretary of state's decision to apply Act 376, "disenfranchising 61,065 legal voters who petitioned the Secretary to certify a referendum petition to the November 2020 ballot," according the committee's filing. Act 376 adds a new filing requirement for canvassers.

After the board's meeting, Alex Gray, an attorney for the Safe Surgery Arkansas committee, said that "there are numerous provisions of Act 376 that we believe are unconstitutional."

After Monday's board meeting, Amanda Story, a spokeswoman for the Arkansans for Healthy Eyes committee that supports Act 579, said in a written statement that "we believe the referendum process ended two weeks ago, when the secretary of state rejected more than 60,000 unlawfully solicited signatures as invalid."

"We think the ballot title is insufficient, and we'll challenge it, if necessary. At this point, we're focused on implementing Act 579 and giving Arkansas patients improved access to quality eye care," she said.

The staff of the Board of Election Commissioners found that the proposed referendum was "not misleading and that a vote 'FOR' the measure results in a vote expanding the practice of optometry, whereas a vote 'AGAINST' the measure does not allow the expansion of the practice of optometry," the board's legal counsel Chris Madison wrote in a memo dated Aug. 2 to board Director Daniel Shults and to the board.

"Fortunately, this was a compact piece of legislation, and the ballot title I think accurately reflects the legislation, so you get the connection between the title and what is actually happening," Madison told the board.

Officials for Safe Surgery Arkansas and Arkansans for Healthy Eyes have disagreed about whether the filing of petitions with signatures of registered voters on July 23 suspended Act 579 from taking effect on July 24.

Act 579 will allow optometrists to administer injections around the eye, remove bumps and lesions from the eyelids, and perform certain types of laser surgery now performed by ophthalmologists -- specifically capsulotomy, a surgery performed after cataract surgery, and trabeculoplasty, a procedure to reduce pressure from glaucoma.

During this year's regular legislative session, supporters of Act 579 said it would allow optometrists to use more of their training and would provide easier access to eye care for patients in rural areas. But the law's opponents, including groups representing ophthalmologists and other physicians, argued that it would put patients at risk.