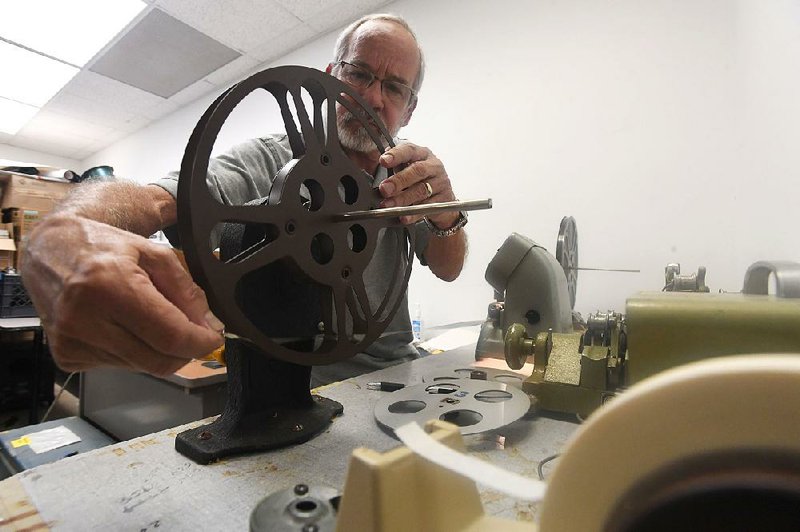 Randall Dixon, director of news archives and media at the David and Barbara Pryor Center for Arkansas Oral and Visual History, loads a film reel on an old editing table Tuesday in Fayetteville.

For some, the videos will bring to life Arkansas' political giants of the era.

"It's not an exaggeration to say it makes me want to weep with joy," said Janine Parry, a political science professor at the University of Arkansas, Fayetteville.

[Video not showing up above? Click here to watch » https://www.youtube.com/watch?v=WcnyB-DkAPI]

KATV, Little Rock's ABC television affiliate, donated its trove of film and videotapes in 2009 to the David and Barbara Pryor Center for Arkansas Oral and Visual History in Fayetteville.

The restoration and digitization of all that footage is being funded by a $1.5 million grant in 2017 from Tyson Foods Inc., the Tyson Family Foundation and Barbara Tyson.

A searchable page was also set up at https://bit.ly/2KMvNTL.

"KATV ... has amassed an astounding archive of Arkansas history," according to the website. "During its almost seventy years of broadcasting, the station saved more than 26,000 hours of news footage on film and videotape, making it one of the largest archives of any local television station in the country."

"I don't think there's another television station in America that has this kind of -- not only size -- but organized material," said Randall Dixon, the Pryor Center's director of news archives and media.

Dixon said Jim Pitcock, a former news director at KATV, thought like an archivist in addition to an editor. He kept meticulous records of what the videos contained.

If there's any question of who somebody is in a video, there's a good chance Dixon will recognize them.

"I was hired in 1979 as KATV's first videotape editor," he said. "I was a 19-year-old [University of Arkansas at Little Rock] broadcast student."

Dixon said this was the first of many batches of footage that will be put online -- fleeting images of Arkansas history that may have been seen only once, if at all. In some cases, the KATV archive includes footage that never aired on television.

"This is a start, a small start, but we will continue to build on it every week," said Dixon.

The MediaPreserve, a Pennsylvania company, has already restored and digitized 300 hours of KATV's film footage, said Dixon. He's been working to make sure the clips are logged accurately so they're searchable on the website.

Next month, 26,000 videotapes will be shipped in a semi-truck from Little Rock to Pennsylvania so they can be restored and digitized, said Dixon.

KATV was founded in 1953, but a fire in 1960 destroyed those early films. Dixon said Pitcock acquired Arkansas films from other sources dating from before the fire, and those films are part of the archive. They include, among other things, ABC national television's footage of Elvis Presley getting a haircut at Fort Chaffee when he joined the Army in 1958.

"Jim found home movies of [Gov.] Francis Cherry's inauguration in the 1950s," said Dixon. "We even found some film of the second annual Hope Watermelon Festival of 1927. It's a huge compilation of things."

The first batch, which is online now, includes many familiar faces -- Bill Clinton, Dale Bumpers, Wilbur Mills and Frank Broyles among them.

In a couple of years, after all the footage has been digitized, the public will have access to some of the more memorable events in Arkansas history -- John F. Kennedy speaking in Heber Springs at the dedication of Greers Ferry Dam in 1963, Johnny Cash singing at Cummins Prison in 1969, and the aftermath of the arrest in Fordyce of members of the Rolling Stones in 1975.

Parry said Dixon showed her a few unprocessed clips from 1968 last summer. She got to hear the voices of former Govs. Winthrop Rockefeller and Orval Faubus as well as the voice of Virginia Johnson, the first woman to run for governor of Arkansas.

"It's indescribably thrilling to watch those historical characters brought to life," said Parry. "It felt like a time machine."

The videos will be a great aid for teachers, said Parry.

"When I'm trying to riff off of Diane Blair's remarkable observations of Arkansas governors and I'm showing George Fisher cartoons to that effect, but then I can so easily weave in a clip of Orval Faubus addressing the Legislature in the 1950s," she said.

"I think it's just going to be riveting," said Parry. "People are going to love that they're doing it." 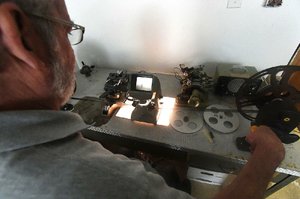 Photo by J.T. Wampler
Randall Dixon looks at footage of a golf tournament from the KATV archives on Tuesday in Fayetteville. More photos are available at arkansasonline.com/821katv