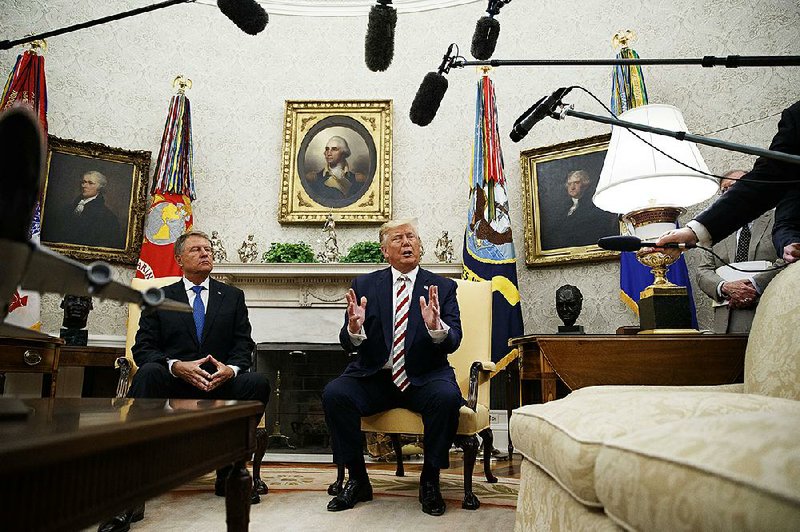 During an Oval Office meeting Tuesday with Romanian President Klaus Iohannis, President Donald Trump said he was worried about a possible “slippery slope” on gun laws where “all of a sudden everything gets taken away.”

WASHINGTON -- President Donald Trump insisted Tuesday that the U.S. already has "very, very strong background checks" for gun purchases, raising questions of whether he is backing away from throwing his political support behind changes to gun laws.

Speaking to reporters in the Oval Office, Trump also noted that "a lot of the people that put me where I am are strong believers in the Second Amendment."

In the days after gunmen opened fire in El Paso, Texas, and in Dayton, Ohio, leaving more than 30 people dead, Trump said he was eager to implement "very meaningful background checks" and told reporters there was "tremendous support" for action.

But more recently, Trump has changed his tone.

[Video not showing up above? Click here to watch » https://www.youtube.com/watch?v=d5hugYjUeI0]

"We have very, very strong background checks right now, but we have sort of missing areas and areas that don't complete the whole circle," the president said, adding, "I have to tell you, it's a mental problem."

He also said he's worried about the potential risk of a "slippery slope," where "all of a sudden everything gets taken away." Just 11 days earlier, Trump dismissed that very same "slippery slope" thinking, which he attributed to the National Rifle Association. "I don't agree with that," he said then.

The comments drew anger from Democrats, including Senate Minority Leader Charles Schumer, who said that if Trump is serious about action, he should call on Senate Majority Leader Mitch McConnell to put a House-passed background-checks bill up for a vote.

"These retreats are heartbreaking, particularly for the families of the victims of gun violence," Schumer tweeted.

Republicans have refused to take up several Democratic-backed gun-control bills that passed in the House, and they historically have opposed many efforts to strengthen the nation's gun laws.

Sen. Chris Murphy, D-Conn., who spoke with Trump earlier this month, said the president expressed support then for working across the aisle "to come up with a background-checks bill that can pass the Senate and save lives." While he said he would wait to hear from Trump again directly, he compared the episode to Trump's flip-flop on background checks in the wake of the Parkland, Fla., shooting after intervention from the NRA.

"It's time for Republicans and President Trump to decide whose side they're on," Murphy said in a statement. "Are they going to stand with the 90% of Americans who want universal background checks, or are they going to once again kowtow to the desires of the gun lobby?"

But a senior White House official pushed back on the notion that Trump was backing away from support for legislative changes, noting that Trump has repeatedly voiced a desire to get something done.

The person also said that "meaningful background checks" remain on the table, even after Trump spoke again by phone Tuesday with NRA chief executive Wayne LaPierre.

But according to other people familiar with the conversation, Trump assured LaPierre that universal background checks are off the table.

LaPierre tweeted that the two had discussed "the best ways to prevent these types of tragedies," and said Trump is "a strong #2A President and supports our Right to Keep and Bear Arms!"

While two Democrats on Capitol Hill described talks with the White House as largely stalled, others said White House officials have been engaged in continued conversations with Democratic and Republican lawmakers. That includes staff-level conversations with Murphy's office since he spoke with Trump, according to one Senate staff member.

"The White House has been very responsive to our office," said Steve Kelly, a spokesman for Republican Sen. Pat Toomey of Pennsylvania, who has long pushed a bipartisan expanded-background-check bill with Democratic Sen. Joe Manchin of West Virginia. "We've had ongoing conversations, at the staff level, with the White House regarding background checks both last week and this week."

Republicans have been trying to build support for more modest measures, including so-called red-flag bills from Sen. Lindsey Graham, R-S.C., and Sen. Marco Rubio, R-Fla., that would allow friends and family to petition authorities to keep guns away from some people. But those efforts are also running into trouble from conservatives, who worry about due process and infringing on gun owners' rights.

NRA spokesman Amy Hunter said the group "has always supported efforts to keep firearms out of the hands of criminals and the dangerously mentally ill" and "appreciates the president's desire to find logical ways of accomplishing that goal."

"However, even the most ardent anti-gun advocates would concede expanded background checks would not have stopped any of the recent high-profile shootings," she said.

Meanwhile, the NRA continues to deal with internal turmoil as two prominent board members stepped down this week.

NRA officials confirmed Tuesday that country music singer Craig Morgan has left the board, as first reported by CNN, along with Richard Childress, a well-known NASCAR team owner based in North Carolina.

The departure of Childress came after he and then-NRA President Oliver North privately urged the group's leaders in a letter this year to more carefully review spending decisions under LaPierre, particularly legal fees totaling tens of millions of dollars.

In his resignation letter Monday, Childress made no mention of those issues and emphasized that he had chosen to leave the NRA board to focus on his private business.

He said he was resigning from the board and all NRA committees he served on effective immediately, "with great regret and a heavy heart." Childress wrote that he had "reached the point" where he could no longer fully commit his time to the organization.

In a statement, NRA President Carolyn Meadows expressed "deep appreciation" for Childress' service to the group.

"We wish him all of the best in his future business endeavors," she said, adding that the group is "pleased to know that Mr. Childress will continue to support our organization and the constitutional freedoms in which it believes."

The latest resignations mean that seven directors have stepped down from the 76-member NRA board since May, contributing to a period of turmoil at the gun-rights organization. The nonprofit group is facing scrutiny from rank-and-file members and regulators about revelations of lavish spending by LaPierre and top vendors. Democratic attorneys general of New York and Washington, D.C., are currently investigating the NRA's tax-exempt status.

Last year, the NRA cut funding for its core missions of firearm safety and education while increasing its spending on legal fees, travel and entertainment. The Washington Post has also reported that NRA money flowed to 18 members of the group's board of directors, which is tasked with overseeing the nonprofit's finances.

Childress had joined North in asking the organization to hire an independent ethics counsel to review $24 million paid during a 13-month period to an outside law firm hired by the NRA, Brewer Attorneys & Counselors, according to a letter obtained by The Washington Post.

"The Brewer invoices are draining NRA cash at mindboggling speed," Childress and North wrote in their April 18 letter to the NRA general counsel and the audit committee chairman, Charles Cotton, adding, "The secrecy surrounding these large invoices causes suspicion and raises questions."

The Brewer firm and the NRA have defended the payments, saying critics are seeking to undermine the gun-rights group.

Cotton said in a statement Tuesday that the letter from Childress and North was "inaccurate" and reflected "a misinformed view of the firm, its billings, and its advocacy for the NRA."

NRA officials have broadly defended their spending as appropriate and said the group remains as strong as ever. In a recent interview with an Arizona radio talk show, Meadows said the organization continues to have more than 5 million members, adding, "Financially, we're in good shape."

Willes Lee, the NRA's second vice president, said in the same radio interview: "We had a little bit of a dust-up last spring. ... But the big thing is that it's clear that the membership supports the leadership at the NRA."

But the battle over the group's leadership has fueled a spate of departures in recent months. In April, North was ousted as president after trying to force out LaPierre, saying as he stepped down that the group's finances were in "a clear crisis." Top lobbyist Christopher W. Cox resigned after he was accused of participating in an alleged extortion scheme with North to push out LaPierre.

Pete Brownell, a onetime NRA president and board member who heads a major supplier of firearms accessories, left in late May.

At the beginning of this month, three NRA board members who had sought more information about the group's spending practices resigned. The three members -- Esther Schneider of Texas, Sean Maloney of Ohio and Timothy Knight of Tennessee -- said they had been stripped of their committee assignments.

"While our belief in the NRA's mission remains as strong today as ever, our confidence in the NRA's leadership has been shattered," they wrote in a letter to NRA officials.

A fifth board member resigned Aug. 12, when Julie Golob, a professional sport shooter and a strong public advocate for gun rights, announced she was ending her service before the end of her three-year term.

Steve Pincus, an NRA member and firearms trainer who has been helping to lead an effort to overhaul the board, said he expects more resignations before the group's board meeting next month in Anchorage, Alaska. "I'll be surprised if 50 show up," he said.

Information for this article was contributed by Jill Colvin and Kevin Freking of The Associated Press; by Carol D. Leonnig, Beth Reinhard, Tom Hamburger and Josh Dawsey of The Washington Post; and by Maggie Haberman, Annie Karni and Danny Hakim of The New York Times.