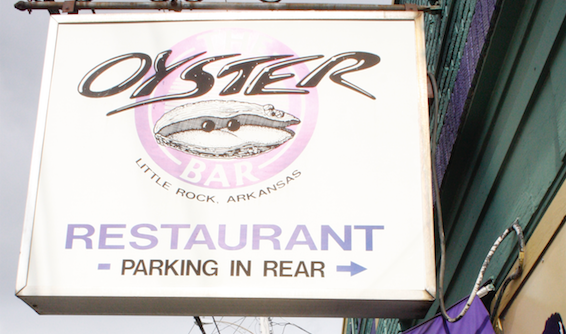 Boyd says Tanner and his team have brought in contractors and taken bids on physical renovations to the space and that she has seen a draft of a new, more upscale menu, but is not sure it's final.

Boyd says she is selling the restaurant because "I am 66, and I'd like to retire while I have time to play."

"I love the Oyster Bar. I've had it for 35 years. So I would hate to see it not survive," she adds. But she's certainly not leaving it for good: "But I expect to be down there hanging out instead of working," she says.

The shrimp and gumbo restaurant first opened in 1975, operating out of a building that once housed a grocery store, according to its website.

The restaurant posted Tuesday on Facebook that patrons have "a few weeks left to come taste and experience The OB you've known and loved for the last 45 years. ... While the menu may change, we know the new folks will do us proud. Oh, and this may be your last chance to snap a pic with Johnny Cash!"

Tanner didn't get back to us by deadline.

Magnolia Skillet, after innumerable delays, has finally opened in the building that formerly housed White Pig Inn, 5231 E. Broadway in North Little Rock's Rose City. Shortly thereafter, according to the Facebook page (facebook.com/Magnolia-Skillet-363934910909863), they've had to shed breakfast — "due to the high lunch demand" — with plans for an expanded lunch menu. Hours are now 11 a.m.-6 p.m. Tuesday-Friday, noon-6 p.m. Saturday. The phone number is (501) 615-8502, but even during current business hours, we got a voicemail message with outdated hours.

The Starbucks at 10721 Kanis Road at Shackleford Road in Little Rock opened over the weekend. Meanwhile, as had been the expectation of several readers, the Starbucks at 11401 Financial Centre Parkway, Little Rock, closed. It's possible the Financial Centre location phone number, (501) 219-2337, has transferred; at any rate, by deadline, it had not been disconnected, nor did anybody answer it during business hours. Which should be the same at the new spot: 5:30 a.m.-10 p.m. Monday-Thursday, 5:30 a.m.-11 p.m. Friday-Saturday, 6 a.m.-10 p.m. Sunday.

Owner Daniel Bryant provides a few extra snippets of information on his pending Hill Station, on the lot that formerly held Helmich's Auto Service, 2712 Kavanaugh Blvd., Little Rock. He is in fact angling toward an October opening, though after 20 years' experience in the restaurant business (he also owns The Fountain up the street; Big Whiskey's, Gus's Fried Chicken and Ernie Biggs in or on the edge of the River Market downtown; and his company is part owner of the North Little Rock Whole Hog franchise), "I've learned to stop predicting opening dates."

The menu is still in progress. Bryant is calling it a "neighborhood restaurant" that will serve a variety of items, including a range of sandwiches and a burger at lunch and an as-yet-undetermined bill of fare for dinner. He stresses, however, that while the menu will have a burger, "it's not a burger place," and he's not exactly sure why folks are expecting that. (Could be because he let the Excaliburger food truck park and vend Monday nights on the lot before he started construction.) Bryant has filed for a "Restaurant Mixed Drink Minimum" permit from the state Alcohol Beverage Control folks. The building, which will seat around 100 will consist of the original service-station shell and a new structure on the front part of the lot. Behind, the removal of a house will provide an outdoor park and green space.

Meanwhile, Bryant confirms the closure and remodeling and repurposing of District Fare, 2807 Kavanaugh, the name of which is returning to H.A.M. — originally an abbreviation-acronym for Hillcrest Artisan Meats — which now will stand on its own. "We're installing a larger walk-in and larger refrigerated cabinets," Bryant explains, and while it will no longer offer seating, it will sell an expanded list of retail items (market items, including bread, cheese, oil and local foodstuffs) and grab-and-go selections that include heat-and-eat meals. H.A.M. founder Brandon Brown will continue to run that business. Bryant will also use the space as a training kitchen for Hill Station employees and as the Hill Station prep kitchen.

And, Bryant says, he and Brown are exploring adding some high tech to the operation, including a possible online order system and/or mobile order app that could show customers what's available in the H.A.M. display cases. "Right now, if you want to know what's in the case, you'll have to come by and look," he adds.

And it's all ready but the paperwork for the opening of the rebirth of Rocky's Pub, now going, at least officially, by Rocky's on Country Club, 117 Country Club Road, Sherwood, in what once was Jo Jo's Bar-B-Q. Final inspections are pending and there's a chance it will be operating by the end of the week, but more probably top of next — 11 a.m.-2 p.m. and 4-9 p.m. Monday-Thursday, 11 a.m.-2 p.m. and 4-10 p.m. Friday-Saturday. The phone number is (501) 392-6150. And the new Facebook page is facebook.com/Rockysoncountryclub.