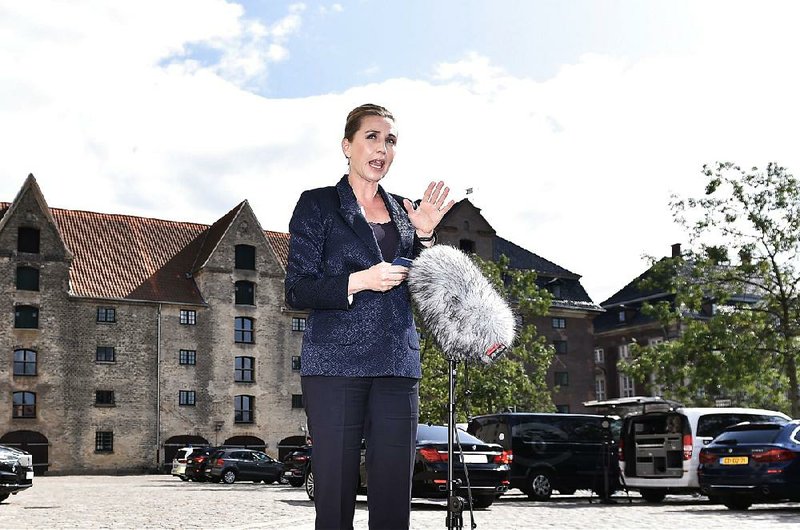 Prime Minister Mette Frederiksen of Denmark said Wednesday in Copenhagen that relations between her country and the United States “are not in any crisis in my opinion” despite President Donald Trump’s decision to cancel his visit to Denmark.

COPENHAGEN, Denmark -- President Donald Trump said Wednesday that he scrapped his trip to Denmark because the prime minister made a "nasty" statement when she rejected his idea to buy Greenland as an absurdity.

Prime Minister Mette Frederiksen had said she had no interest in discussing the sale of Greenland. "Greenland is not Danish. Greenland belongs to Greenland," Frederiksen told a Danish newspaper this week. "I strongly hope that this is not meant seriously."

She had called the whole thing "an absurd discussion."

Speaking to reporters at the White House on Wednesday, Trump said Frederiksen's comment labeling his idea as absurd "was nasty. I thought it was an inappropriate statement.

[Video not showing up above? Click here to watch » https://www.youtube.com/watch?v=TRCE1S_w0YU]

He added, "You don't talk to the United States that way."

Trump noted that others had also floated the idea of a U.S. purchase of Greenland, including former President Harry Truman.

Greenland is a semiautonomous territory of the U.S. ally, and Frederiksen said the U.S. remains one of Denmark's close allies.

The political spat over the world's largest island comes from its strategic location in the Arctic. Global warming is making Greenland more accessible to potential oil and mineral resources. Russia, China, the U.S., Canada and other countries are are looking to stake a claim to Arctic lands, hoping they will yield future riches.

Trump was scheduled to visit Denmark on Sept. 2-3 as part of a European tour. But late Tuesday, he tweeted his decision to postpone the trip. The move stunned Danes and blindsided the Danish royal palace. Spokesman Lene Balleby said it came as "a surprise" to the royal household, which had formally invited Trump.

"Denmark is a very special country with incredible people, but based on Prime Minister Mette Frederiksen's comments, that she would have no interest in discussing the purchase of Greenland, I will be postponing our meeting scheduled in two weeks for another time," Trump tweeted. He also thanked Frederiksen for "being so direct."

The vast island of Greenland sits between the Atlantic and Arctic oceans, has a population of 56,000 and has 80% of its land mass covered by a 660,000 square-mile ice sheet.

For all of Greenland's appeal, scientists consider it the canary in the coal mine for climate change and say its ice sheet has seen one of its biggest melts on record this summer, contributing to a global rise in sea levels.

The U.S. State Department said Secretary of State Mike Pompeo spoke Wednesday with his Danish counterpart and "expressed appreciation for Denmark's cooperation as one of the United States' allies and Denmark's contributions to address shared global security priorities."

Frederiksen said she is standing behind the government of Greenland.

"A discussion about a potential sale of Greenland has been put forward. It has been rejected by Greenland Premier Kim Kielsen and I fully stand behind that rejection," she told reporters in Copenhagen.

Frederiksen, who took office two months ago in a minority Social Democratic government, went on to say that diplomatic relations between Copenhagen and Washington "are not in any crisis in my opinion" despite Trump's canceled plans.

"The invitation for a stronger strategic cooperation with the Americans in the Arctic is still open," Frederiksen said, adding "the United States is one of our closest allies."

Her measured remarks stood in strong contrast with Danish lawmakers from across the political spectrum and former government ministers who slammed the president's behavior as juvenile, undiplomatic and insulting.

"It's an insult from a close friend and ally," said Michael Aastrup Jensen, a member of the Danish parliament with the influential center-right Venstre party. He said Trump's interest in purchasing Greenland took the country by surprise and was initially widely considered to be a joke, before Danes realized the full extent of "this disaster."

Jensen said Danish lawmakers felt misled and "appalled" by the president, who "lacks even basic diplomatic skills," he said. "There was no word [ahead of time] about: 'I want to buy Greenland and that's why I'm coming.'"

On Twitter, Denmark's former business minister, Rasmus Jarlov, wrote: "For no reason Trump assumes that (an autonomous) part of our country is for sale. Then insultingly cancels visit that everybody was preparing for."

Martin Lidegaard, a former Danish foreign minister, told broadcaster TV2 that it was "a diplomatic farce" and Trump's behavior was "grotesque."

Trump's cancellation was "deeply insulting to the people of Greenland and Denmark," former Prime Minister Helle Thorning-Schmidt wrote on Twitter.

Claus Oxfeldt, chairman of Denmark's main police union, told Danish media outlets that authorities had been busy planning the third visit by a sitting U.S. president to the Scandinavian NATO member. "It has created great frustrations to have spent so much time preparing for a visit that is canceled," Oxfeldt was quoted as saying.

Ordinary Danes shook their heads at the news, with many calling Trump immature.

"He thinks he can just buy Greenland. He acts like an elephant in a china shop," said Pernille Iversen, a 41-year-old shopkeeper in Copenhagen.

"This is an insult to [Queen] Margrethe, to Denmark," said Steen Gade, a 55-year-old road worker.

In Greenland, Johannes Kyed, an employee with a mine company, told Denmark's TV2 channel that wanting to buy a country and its people is a relic of the past.

"This is not the way the world works today," Kyed said.

The U.S. ambassador to Denmark, Carla Sands, was apparently not informed of Trump's decision ahead of time.

Trump said Sunday that he was interested in buying Greenland for strategic purposes, but said a purchase was not a priority for his government at this time. Both Frederiksen and Greenland leader Kielsen responded that Greenland is not for sale.

Trump is still expected to visit nearby Poland beginning on Aug. 31.

Information for this article was contributed by Jan M. Olsen, Laurie Kellman and Darlene Superville of The Associated Press; by Rick Noack, John Wagner, Josh Dawsey and Jennifer Hassan of The Washington Post; and by Martin Selsoe Sorensen of The New York Times. 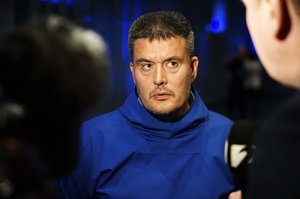 Photo by AP/Egill Bjarnason
Greenland Premier Kim Kielsen speaks to the media after the Nordic Prime Ministers' Meeting in Reykjavik, on Tuesday Aug. 20, 2019.