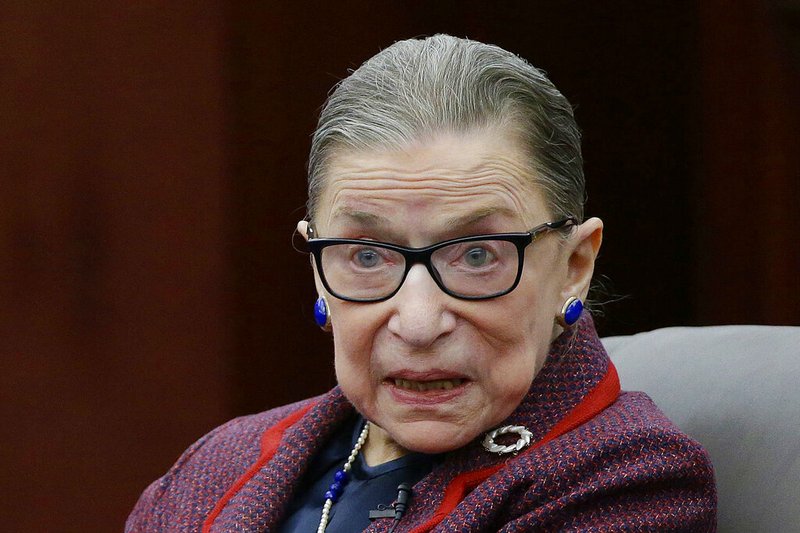 In this Jan. 30, 2018 file photo, Supreme Court Justice Ruth Bader Ginsburg answers a law student's question as she participates in a "fireside chat" in the Bruce M. Selya Appellate Courtroom at the Roger William University Law School in Bristol, R.I. Now we know what Justice Ruth Bader Ginsburg was doing as she recuperated from lung cancer surgery. She was churning out opinions for the court at a faster clip than any of her younger colleagues. (AP Photo/Stephan Savoia)

“The event is proceeding as planned,” said Patrick Newton, director of marketing and communications for the Clinton School of Public Service.

A release from the Supreme Court on Friday said the justice underwent outpatient treatment for the tumor and there is no evidence of cancer anywhere else in Ginsberg’s body. The release also said the pancreatic tumor would require no more treatment.

The local event, part of the Clinton School and Clinton Foundation’s Kumpuris Distinguished Lecture Series, was originally planned to take place at the Jack Stephens Center at the University of Arkansas at Little Rock.

A massive waitlist for the free but ticketed event led organizers to change the venue to the Verizon Arena, which, despite a capacity of 18,000, still did not meet demand for tickets. A Clinton School spokesman said that roughly 16,000 seats would likely be available for the Supreme Court justice’s lecture.

Newton said thousands remain on the waitlist for the event, which will include discussion of Ginsburg’s "quarter century on the nation's highest bench and historic legal career prior to being nominated" to the high court, organizers said in a news release.

The news of Ginsburg's cancer comes less than a year after Ginsburg underwent surgery to treat lung cancer. Ginsburg has also been in treatment for other cancers in the last 20 years.

Ginsburg was appointed to the Supreme Court in 1993 by President and former Arkansas Gov. Bill Clinton.