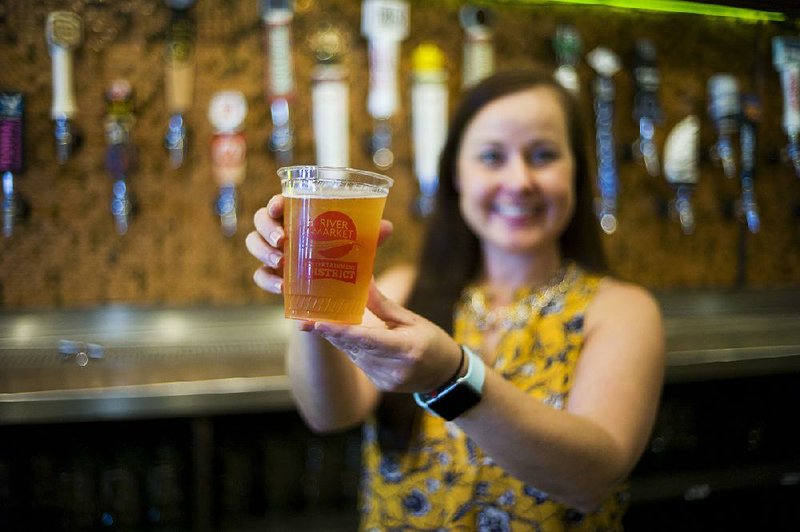 Olivia Klak, general manager of the Flying Saucer in Little Rock’s River Market district shows off the new open container that patrons can use, for a small charge, to imbibe alcohol on sidewalks and designated spaces when the entertainment district opens this evening. ( Jeff Gammons)

Little Rock police are watching but will take a "wait-and-see" approach when the city's first open-container entertainment district debuts at 5 p.m. today.

Thirty days after the Little Rock Board of Directors voted to turn four blocks of the downtown River Market District into an entertainment zone three days a week, patrons will be allowed to imbibe beer, wine and mixed drinks from open containers on sidewalks and in designated public spaces.

Tonight's opening coincides with a soldout concert featuring country-western singer Chris Stapleton across the river at Verizon Arena in North Little Rock. City partners have coordinated with local bands and buskers to provide additional entertainment at the row of bars, restaurants, shops and galleries along the stretch of President Clinton Avenue that runs from Interstate 30 to Cumberland Street.

Lt. Michael Ford, spokesman for the Police Department, said that this weekend likely will serve as a yardstick for how the department will police the entertainment district moving forward.

"It should be a good gauge for us to know where we need to go from here, if we're adequately covering the area," he said. 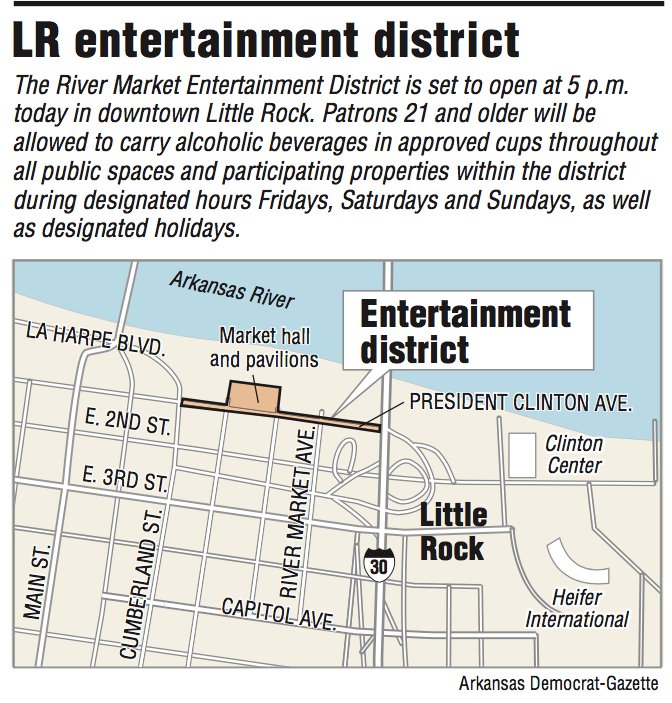 Ford said police plan to have two additional patrol officers for the four-block area. Those officers are part of the community-oriented policing program who will be pulled temporarily from the 12th Street area. Officers also can apply for voluntary overtime to patrol the entertainment district, he said.

Once the current recruit class is on the streets, Ford said the department will look into stationing officers permanently in the area.

Mayor Frank Scott Jr. has said he hopes to encourage residents to stay in the city for a fun night out and enjoy Little Rock's own "flavor" by giving them a taste of other destinations, such as Memphis and New Orleans, that allow open containers in areas teeming with bars and music venues.

But Beale Street in Memphis and Bourbon Street in New Orleans also have reputations for noise and bad behavior, and the larger cities have managed their districts with increased policing.

Memphis also has implemented a $5 admission charge at Beale Street on Fridays and Saturdays as a way to combat crime, ABC affiliate WREG reported in June.

New Orleans municipal code allows anyone to carry an open container of alcohol throughout the French Quarter as long as the container isn't made of glass, but has few other regulations.

The city has spent millions over the past few years to add officers and surveillance cameras to Bourbon Street after a rise in violent crime, the New Orleans Advocate reported in July.

Gretchen Hall, president and chief executive officer of the Little Rock Convention and Visitors Bureau, said previously that Arkansas' capital city modeled its entertainment district ordinance after ordinances in smaller cities, such as Huntsville, Ala., and Tuscaloosa, Ala.

Ford said there are no plans for entry and exit points, mandatory searches or surveillance cameras in the River Market District, but officers may close the streets if traffic backs up. Arkansas law allows any resident to carry firearms, either in the open or concealed, without a permit, which adds a concern for police and is something officers will monitor, Ford said.

Officers will make sure patrons who are drinking alcohol in the open have both the branded cups that participating establishments provide as well as wristbands indicating that they are at least 21 years old.

"We want people to come down to the entertainment district and have fun," Ford said. "I think you can do those things, but you have to be abiding by the city ordinance."

A full list of rules and details regarding the River Market Entertainment District is available at arkansasonline.com/823district.

"We do hope people reuse their cups, especially for the night," Long said.

The cups look and feel like plastic but are made from plants and are compostable. They are printed with the River Market Entertainment District logo and that of a sponsor, and include the district's rules and hours. A to-go cup adds $1 to the cost of a drink, which won't be applied again when the patron pays for a refill.

Long said last week that organizers hope the extra charge for the cup encourages people not to toss them aside after finishing a drink.

The district's boundaries will be defined by branded light pole banners and sidewalk decals. The River Market District also plans to extend the hours of its ambassador program during the district's debut, which will keep yellow-shirted employees available to answer visitors' questions and make sure rules are being followed. Many downtown stakeholders, including Hall, have said they'll participate as volunteer ambassadors to help the kickoff go smoothly.

Act 812, sponsored earlier this year by Sen. Trent Garner, R-El Dorado, gives cities the authority to set reasonable standards for the regulation of alcohol possession within such districts.

At least one other Arkansas city with an entertainment district is off to a snag-free start, according to officials. El Dorado opened its entertainment district July 25, and so far there's been "not a peep" of complaints about noise or trash from business owners and residents, said Pam Griffin, president and chief operating officer of Murphy Arts District in El Dorado.

El Dorado's 17-block entertainment district includes the arts district as well as several other streets. Open containers are allowed to be carried out of bars and restaurants on Thursdays, Fridays and Saturdays, and Griffin said she's noticed an increased police presence in the area.

In contrast with Little Rock, Griffin said the city hasn't been actively advertising its new open-container rules, aside from signs at participating establishments.

"Those that are downtown and drinking are becoming aware of it," she said, "but it's not like we're saying, 'Hey, come to downtown El Dorado and drink in the street.'"