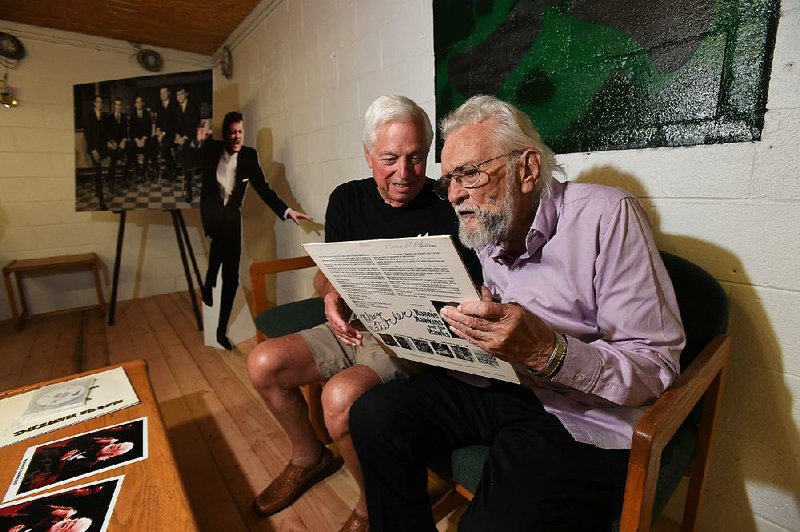 Ronnie Hawkins (right) visits with old friend Billy Lieblong during a reception Thursday at the storied Rockwood Club on the south side of Fayetteville. More photos at arkansasonline.com/823hawkins/ ( NWA Democrat-Gazette / J.T. Wampler)

Hawkins, a rock 'n' roll singer, was hanging out at the club with his "roadie" Don Tyson, who would later become president and CEO of Tyson Foods Inc.

"Me and Don Tyson picked up a couple of debutantes in here," said Hawkins.

He said they "slipped" the girls into a dark room off the dance floor.

"What we didn't know was Dayton Stratton had just painted the floor red," said Hawkins, referring to the club's manager.

Hawkins, 84, a Huntsville native who lives in Toronto, was at the Rockwood Club on Thursday for a private homecoming reception in conjunction with the Fayetteville Roots Festival, an urban music and food festival that began Thursday and will continue through Sunday.

A crowd of about 200 attended Thursday's reception.

"A lot of you boys I recognize," said Hawkins. "And a lot of you girls I think I recognize. I can't remember you with your clothes on."

The crowd roared with laughter throughout Hawkins' 10-minute monologue.

The Rockwood Club opened in 1947. It went through several incarnations starting in 1965 -- The R&S Club, Frank and Edna's Rockwood Club, The Flaming Arrow, then back again to The Rockwood Club -- before becoming St. Michael's Disco Alley in 1977.

In recent years, the rock building on the south side of Fayetteville served as office space for a construction company.

Risk said he hopes to reopen the Rockwood Club as an event center and museum after the restoration is complete. It may also serve as a performance venue, said Sandra Cox Birchfield, an amateur local music historian who has been researching the Rockwood Club and assisting Risk.

The Rockwood Club was a regionally famous music venue in the 1950s and early 1960s.

Ronnie Hawkins and the Hawks were regulars there from 1961-64, an era in which Hawkins owned the club.

The Hawks split from Hawkins in 1964, and he sold the Rockwood Club that same year.

Bob Dylan hired The Hawks as his backup band, and they eventually changed their name to The Band. With Arkansas native Levon Helm singing and playing drums, The Band had several hits of its own, including "The Weight" and "The Night They Drove Old Dixie Down."

Bobby Crafford of Maumelle, drummer and singer for The Legendary Pacers, said he has known Hawkins since 1958, but he hadn't seen Hawkins in decades.

Crafford was at Hawkins' homecoming event before heading over to George's Majestic Lounge, where The Legendary Pacers was playing Thursday night.

Crafford said Sonny Burgess and the Pacers played the Rockwood Club five or six times back in the day. Burgess, the Pacers' frontman, died in 2017.

"We played here one Friday night, and they had a big fight," said Crafford.

A quarterback for the Arkansas Razorbacks came out on top of that one, he said.

Speaking of Razorbacks, Crafford had a statewide hit in 1965 with a song called "Short Squashed Texan." The Razorback football team beat the No. 1 Texas Longhorns 27-24 that year in Fayetteville.

"My legs are a little bit gone from chasing them girls," he told the crowd. "But I caught a couple a couple of weeks ago. They were in them walkers."

"What few brain cells I've got left are severely wounded," said Hawkins. "I tell people 'Don Tyson was my roadie.' They say, 'You mean Don Tyson picked up your equipment?' I say, 'No, he picked up the tabs.'"