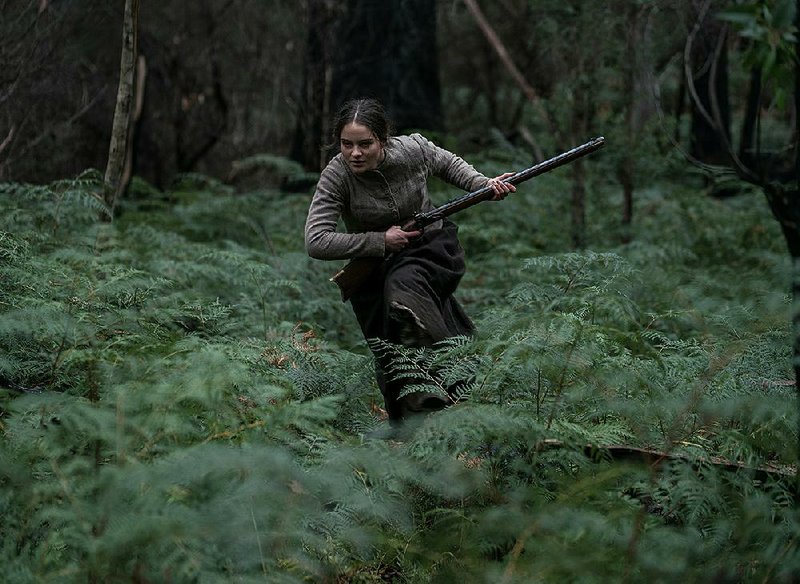 Clare (Aisling Franciosi) is an avenging angel in Jennifer Kent’s The Nightingale, the writer-director long-awaited follow-up to 2014’s The Babadook.

Jennifer Kent's follow-up to her startling debut, 2014's The Babadook, is a dark and brutal revenge drama set in 1825 on the island of Tasmania (then known as Van Diemen's Land) during a conflict called the Black War that pitted aboriginal Tasmanians against British colonists.

No doubt many moviegoers who fell under the spell of The Babadook have never heard of the Black War, especially in gleefully ahistorical America. But it might be a good idea to understand that the film is set in a wild country where -- quite soon after the fictional events depicted in the film -- the colonial government will declare it no crime to murder black people. Some settlers, the historian James Fenton has noted, considered it "a noble service to shoot them down."

Rating: R, for strong violent and disturbing content including rape, language throughout, and brief sexuality

This context informs the horror of The Nightingale, which is about indentured Irish convict Clare (Aisling Franciosi), who's in bondage to cruel British officer Hawkins (Sam Claflin). Though she's overdue to be released from her indenture, Hawkins likes having her around. She has a pretty face, a nice singing voice and her husband and child are not his concern. So he'll let her go when he lets her go.

This callous indifference finally explodes in acts of horrific sexual and physical violence unflinchingly depicted by Kent. In the aftermath, Clare is left with nothing but her hate.

That's a reductive take on a provocative film that engages queasy intuitions about the kind of animals we are, but it will have to do for now. It's been a few days since I watched The Nightingale, and I'm still sorting out what I think about it.

While on one level I think it's clearly a first-rate work of art -- that it won a special prize at the Venice Film Festival indicates I'm not the only one who's a little over-awed by it -- it's the very definition of a hard watch. It demands your attention even as it repels you; watching it feels like trying to push the like poles of magnets together.

Clare's credible racism (she calls Billy "boy," suspects him of cannibalism, levels her gun at him) adds another layer to the story, as does its eventual softening as she learns Billy's story. His family has been murdered by colonists; they have both been casually victimized by white men who see sexual debasement and murder as tools with which they might build an empire. Partnerships and love affairs have been founded upon less.

Kent is a shrewd and crafty storyteller, and the same elements of plausible psychological horror that made The Babadook so effective are at play here. Clare's state of mind is understandably fragile; just because she sees things doesn't mean they exist.

It is an interesting coincidence that this quest movie opens the same week as the very different The Peanut Butter Falcon. While Kent doesn't explicitly acknowledge it the way the Falcon filmmakers do, both films feature variations on the dynamic of The Adventures of Huckleberry Finn. Take it a step further, and Clare is more than a little reminiscent of Mattie Ross, the protagonist of Charles Portis' True Grit, herself a clever inversion of the Huck character. The Nightingale is a good deal darker than these stories, which are dark enough.

But there's no question who's Huck and who's Jim here. This is Clare's journey up the river to the heart of darkness; Billy is there to provide practical support and echo her grievances. Both of them sing in their native tongues (she in Gaelic, he in Palawa Kani, a dialect reconstructed from near-extinct indigenous Tasmanian languages and never heard before in a feature film). Both of them have been devastated. Both of them hate the English.

But Clare is the vessel for the audience's empathy, and sometimes she seems insensitive to the plight of the natives. She's not a murderous thug like the English, but the film still privileges her point of view. Kent is smart enough to understand how some might think that's problematic, but maybe she can't really see her way around it. Not all problems are cured by being discovered.

It's interesting that Damon Herriman, who briefly appears as Charles Manson in Once Upon a Time ... in Hollywood, shows up here as venomously crude Corporal Ruse, the worst of Hawkins' thugs.

The violence in The Nightingale is graphic, upsetting, unpleasant. That's how violence ought to be depicted -- as something sickening and repellent. But something makes me withhold a full endorsement. Maybe that's just the sort of film The Nightingale is -- another kind of true story, one that shows the way we really are. It's hard to get enthusiastic about that. 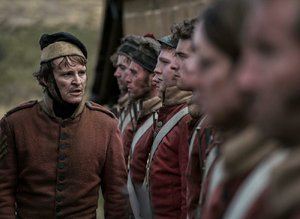 Damon Herriman describes Corporal Ruse, who he plays in Jennifer Kent’s The Nightingale, as the “most hideous” character in his career. And he has played Charles Manson twice.