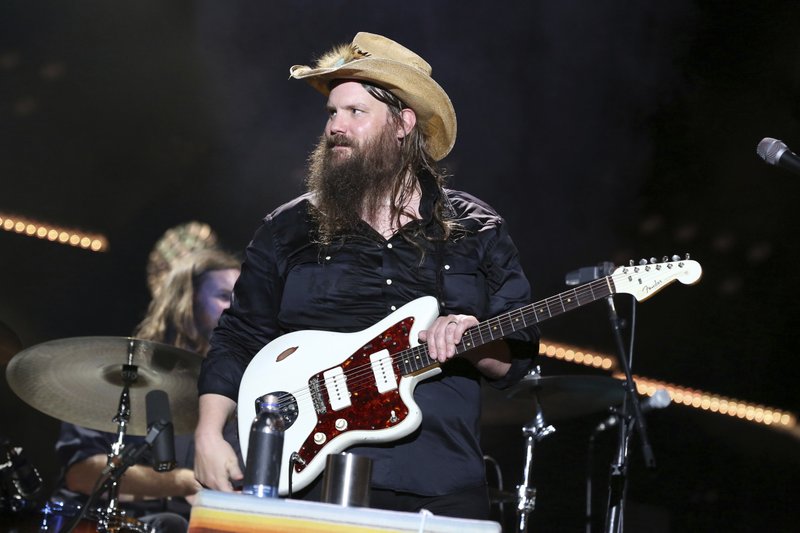 Musical acts that somehow make it through the narrow gaps that open up in the otherwise uniform country music front – a front dominated by pretty boys singing pop-rock-country songs – usually don’t last long. Chris Stapleton bucks Nashville orthodoxy in almost every way imaginable and yet it seems the singer-songwriter has developed a strong, unbreakable grip on a large audience.

Stapleton, who had quite a bit of success behind the scenes as one of country music’s many songwriters, unexpectedly broke through as a performer with 2015’s Traveller. He did so even though his appearance and soul/blues/guitar-fueled songs hardly fit in country’s light and bright bro-party wave.

Friday night a sold out Verizon Arena crowd warmly greeted Stapleton, their long-haired, bearded hero in town with no new album to promote and with very little else that seems to have changed in his act. Even Stapleton’s stage set in the current tour is recycled from the last time he hit Central Arkansas.

But that act is happily fortified by Stapleton’s one-of-a-kind, powerful voice, his bag of hits (he has apparently written over 1,000 songs) and his virtuoso guitar playing. Country music delivered Stapleton to the masses but, in concert, he comes across as a swamp rocker with a blues bent.

Friday night found him rolling through “Broken Halos,” “Millionaire” and an especially strong “Parachute,” an earworm if there ever was one. “Nobody to Blame” made a mark and a searing “Whiskey and You” perhaps offered up the best example of why Stapleton could be in it for the long haul. Country music generally stays away from songs that soulful and listeners are clearly thirsty for something that dares to hit them hard.

The concert, clocking in at two hours, stretched out at times with extended solos for Stapleton, who was backed by a four piece band that included a harmonica player.

Has any performer been as rooted to one spot on the stage as much as Stapleton is? He kept close to his microphone the entire time except when trading out his acoustic and electric guitars. His genial but laconic presence on stage bled through to the audience. They sang along to the songs they knew (which was most of them) but it was nobody’s idea of a rowdy crowd. At one point Stapleton called out his opening acts and played a song that he claimed was about driving a fast car back home (the song had Arkansas in the chorus). Frankly, Stapleton, for all his gifts, likes the slower tempos and a few more faster ones could only help. His adoring fans probably wouldn’t have any issues singing along.