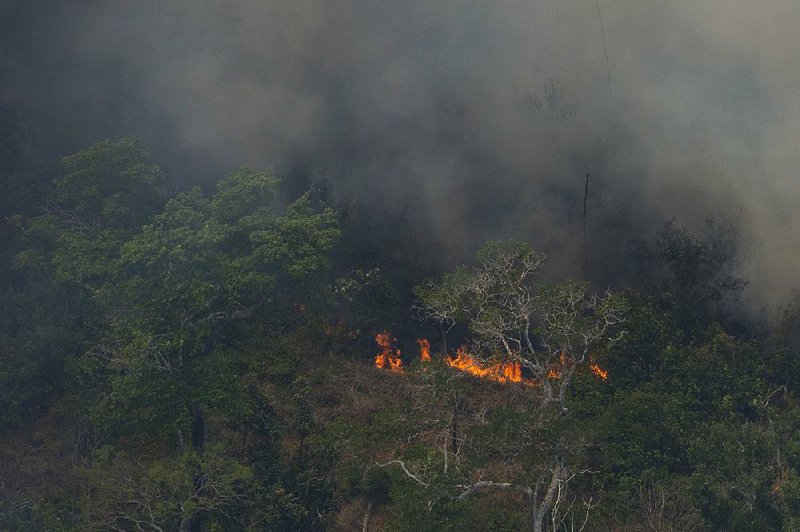 Wildfires consume an area of rain forest near Porto Velho in Brazil on Friday.

BIARRITZ, France -- In a sharp escalation of tensions over fires ravaging the Amazon, France on Friday accused Brazil's president of having lied to French leader Emmanuel Macron and threatened to block a European Union trade deal with South American states including Brazil.

Ireland joined in the threat of possible economic repercussions for Brazil and its South American neighbors, starkly illustrating how the Amazon is becoming a battleground between Brazilian President Jair Bolsonaro and increasingly critical governments alarmed that vast areas of the rain forest are going up in smoke.

On Friday, Bolsonaro authorized use of the military to battle the blazes.

Brazilian forces will deploy starting today to border areas, indigenous territories and other affected regions in the Amazon to assist in putting out fires for a month, according to a presidential decree.

The armed forces will collaborate with public security and environmental protection agencies, the decree says. Bolsonaro's office confirmed that he had signed it.

"The protection of the forest is our duty," the president said. "We are aware of that and will act to combat deforestation and criminal activities that put people at risk in the Amazon. We are a government of zero tolerance for crime, and in the environmental field it will not be different."

Having won support from other governments by putting the Amazon wildfires on the radar of world leaders gathering for a Group of Seven summit in France, Macron further increased the pressure with a statement from his office Friday that took direct aim at Bolsonaro's trustworthiness.

[Video not showing up above? Click here to watch » https://www.youtube.com/watch?v=JRNQttiLRyQ]

"In light of Brazil's attitude these recent weeks," the statement said, Macron "can only conclude that President Bolsonaro lied to him during the Osaka Summit" in June where governments agreed on the "urgent need" to tackle climate change, pollution and environmental destruction.

"The decisions and statements from Brazil these recent weeks show clearly that President Bolsonaro has decided to not respect his commitments on the climate, nor to involve himself on the issue of biodiversity."

As a consequence, France now opposes an EU trade deal "in its current state" with the Mercosur bloc of South American nations that includes Brazil, Argentina, Paraguay and Uruguay.

Irish Prime Minister Leo Varadkar also said "there is no way that Ireland will vote" for the deal "if Brazil does not honor its environmental commitments."

The tariff-slashing deal was billed as the EU's largest ever trade agreement when struck in June. The deal also recommitted Mercosur nations to the Paris climate accord aimed at limiting global warming, which included pledged Brazilian action to stop illegal deforestation in the Amazon.

Foreign governments that threaten to punish Brazil on trade or exports, she said, "first need to know what is happening in Brazil before taking any measure."

Correa called on foreign governments to "lower the temperature," adding that "Brazil understands the importance of the Amazon."

"Our future Trade prospects are very exciting and our relationship is strong, perhaps stronger than ever before," Trump tweeted. "I told him if the United States can help with the Amazon Rainforest fires, we stand ready to assist!"

Fires are common in Brazil in the annual dry season, but they are much more widespread this year. Brazilian state experts reported nearly 77,000 wildfires across the country so far this year, up 85% over the same period in 2018.

Macron first raised the alarm over the Amazon with a tweet Thursday saying: "Our house is burning. Literally." He asked that the Amazon fires be added to the agenda of the G-7 summit of world leaders that he's hosting this weekend, and quickly found backing from Germany, the EU and others.

Prime Minister Antii Rinne of Finland, whose country currently holds the EU's rotating presidency, described himself as "truly worried about the attitude Brazil seems to have adopted right now regarding its own forests" and called the Amazon fires "a threat to our whole planet, not just to Brazil or South America."

The Brazilian leader accused Macron of sensationalism and of seeking "personal political gains in an internal matter for Brazil and other Amazonian countries." Brazil contains about 60% of the Amazon rain forest.

While many of the fires have been set by farmers on lands that were previously cleared, others were set by people clearing rain forest anew, for crops or pastures. Environmentalists say Bolsonaro's government has enabled and even encouraged the destruction, which it denies.

Bolsonaro claimed this week that nongovernmental organizations had set fires to make his administration look bad, in retaliation for having their government grants cut, but conceded that he had no evidence for the accusation. He said that his country did not have the resources to fight the fires effectively.

Even if Amazon nations did seek help in fighting the fires, there may not be much that European governments could quickly offer in the way of material assistance.

Amphibious planes widely used in Europe to dump water and retardants on wildfires don't have the range to cross the Atlantic Ocean, Col. Gregory Allione, head of France's national federation of firefighters, said.

Larger, land-based firefighting planes could only reach the Amazon from Europe via a circuitous route over Greenland, North and Central America, which "would take an eternity," he said.

And European governments might not have much firefighting expertise and manpower to spare after a scorching European summer that saw record heat waves and left many areas of Europe tinder-dry, another consequence of climate change.

Environmental campaigners said longer-term solutions are needed to preserve the Amazon. Some have accused Macron of hypocrisy, arguing that while he's adept at using Twitter to position himself as a champion for the planet, his domestic record on green issues is spotty at best. His first environment minister quit abruptly, frustrated by the slow progress fighting climate change and other environmental problems under Macron's government.

"Both inequalities and climate change are two fires on the planet, on the humanity. They are big threats for us all," said Cecile Duflot, head of Oxfam France and another former minister of Macron's. "What happens in the Amazon of course hurts us, but this is not a coincidence. It is a political choice made by Bolsonaro to destroy nature, to support those who are destroying nature, so we must absolutely act together in a concerted, determined and diplomatic way together with the local population who are living this as an absolute disaster."

The Amazon forests are an important global repository of carbon, and when trees are burned they release carbon dioxide, the primary greenhouse gas, into the atmosphere. In addition, deforestation threatens indigenous peoples and wildlife found only in that region.

Neighboring Bolivia and Paraguay have also struggled to contain fires that swept through woods and fields and, in many cases, were set to clear land for farming. About 2,900 square miles of land has been affected in Bolivia, according to Defense Minister Javier Zavaleta.

On Friday, a B747-400 SuperTanker arrived in Bolivia and began flying over devastated areas to help put out the fires and protect forests. The U.S.-based aircraft can carry nearly 20,000 gallons of retardant.

Some 140 square miles have burned in northern Paraguay, near the borders with Brazil and Bolivia, said Joaquin Roa, a Paraguayan state emergency official. He said the situation has stabilized. 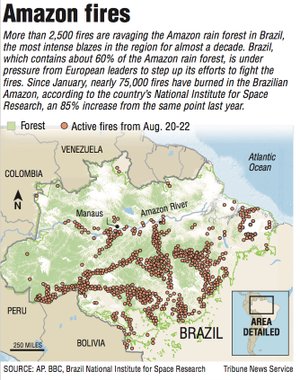