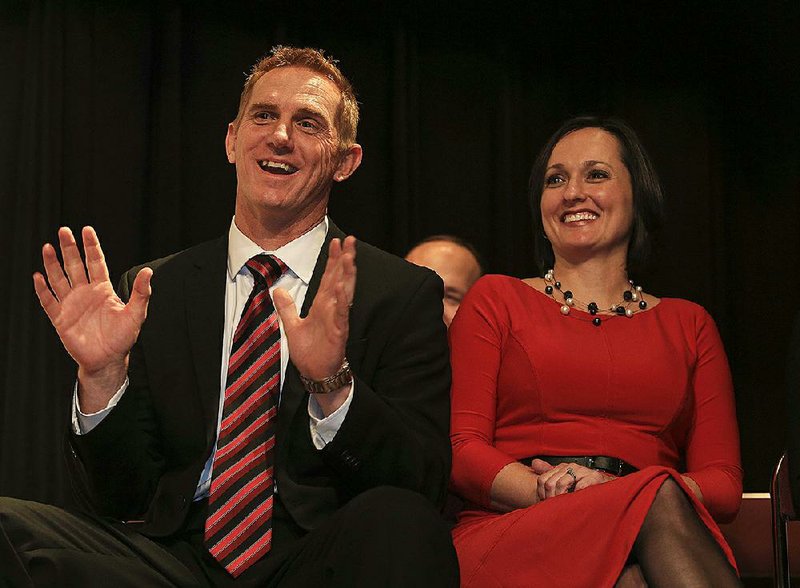 JONESBORO -- The background of the stage was lit in red, the color of the Red Wolves.

In the foreground, over a dozen arrangements of various colored flowers -- some red, others pink -- overspread the steps of the stage. At the base of the center of the stage sat a coffin wrapped in more flowers and a photo of a family.

On the giant video screens, a portrait of the late Wendy Anderson -- the wife of Arkansas State University football Coach Blake Anderson -- was accompanied with the phrase "In our hearts forever," and the hashtag that has circulated on Twitter this week and for many months prior -- #NotFightingAlone.

Not for one second was Wendy LeeAnn Anderson ever fighting cancer alone. Hundreds gathered inside the worship center of Central Baptist Church on Friday morning for her memorial service, proving just that.

Wendy died late Monday night at 49. She had battled breast cancer since her diagnosis in April 2017. She celebrated her 49th birthday on the Thursday prior to her death.

"Today's all about you babe & the grace and power of Jesus Christ," Blake Anderson tweeted Friday morning. "Miss 'My Girl' more than ever this very minute but know you will be smiling down on all of us today watching God work through your life."

A gaping hole has been left in the ASU and Jonesboro communities, as well as in the college football world. That was poignantly felt Friday.

In the parking lot, countless Red Wolves logos were present on cars and license plates. Inside the service, many wore Red Wolves polos. ASU's football team sat in the middle of the congregation, and numerous former players -- including ex-quarterback Justice Hansen and ex-defensive back Justin Clifton -- were present.

The rest of the Red Wolves' coaches and their families sat behind Damphousse, Duggan and Johnson.

Johnson, who's in his sixth year at ASU, is the only one on the staff who's been with Blake since the beginning in Jonesboro.

"Every time [Wendy] walked in the room, it was a vibrant energy," Johnson said later in the day. "She could draw the attention of people, and she knew the right things to say and was always encouraging. Even for the coaching staff, when she walked in and you can hear her down the hall laughing. It's just some great memories of her."

Wendy Anderson resembled a motherly figure for the football program, and she spent her final days living that out. She's known to many as "Mama Wendy" for a reason.

Central Baptist senior pastor Archie Mason told the story Friday of his recent visit to the Andersons' house, where he noticed a kitchen table full of items. Blake informed him they were preseason gifts for the wives of ASU's coaching staff, and Wendy -- despite being restricted from leaving the house -- had went out and bought them with some help.

"She was dying, and she cared more for others than she did for herself," Mason said. "Can't we learn from that?"

Earlier this week, junior quarterback Logan Bonner said Wendy was especially close with the quarterbacks. Bonner said they frequently hung out at the Andersons' house, and Bonner and Hansen -- who was a three-year starter -- liked to engage in playful debates with Wendy over conspiracy theories.

Hansen said on Twitter earlier this week that the quarterback room would receive bags of flavored popcorn, provided by Wendy, during Friday meetings. Wendy even gave Hansen countless treats and toys for his dog once she discovered he had one.

"It's kind of like how youth soccer teams have that team mom that brings all the snacks and everything and gives all her unconditional support," senior quarterback Carson Coats said. "She was that for us. She was just a light presence that we had.

"Preparing for games is tough, and it's tough on your body and your mind, and she was just like a liaison into peace and giving us comfort throughout the season."

Midway through Friday's service, a recording of her sharing her testimony and how she grew to find God played on the video screens. It was from Feb. 3, 2017. Two months later, she was diagnosed with cancer.

Wendy's belief she would beat the disease remained strong.

"She was brave," Johnson said. "She was a brave woman."

As the service concluded, Anderson and his family exited the church together first, followed by the ASU football team and coaches. Johnson wiped tears from his eyes as he walked out.

Roughly two hours after leaving Central Baptist Church and less than 6 miles away, ASU's players started to trickle back to the south end zone facility at Centennial Bank Stadium with their red and black Adidas backpacks, preparing for another day of work.

"It's been a trying week," Johnson said. "We try to put the focus on practice and the preparation and all that, but in the back of your mind, you're sitting there going, 'OK, how is Coach Anderson doing?'

"He needs for us to prepare like we've never prepared before while he's gone, in honor of him and Wendy. That's what Wendy would want, that's what Coach Anderson wants."

The season opener against SMU is set for next Saturday night in Jonesboro. Everyone inside ASU's facility will be the first to admit right now that football is not as important as it was -- at least not after this week.

But there's no mistaking it's been a mechanism for an everlasting bond with the Anderson family, and it will serve as the mechanism for healing.

"We just love [Wendy], and we love Coach Anderson," Coats said. "Everything that we're able to do today, all the people that are here right now are here because of those two.

"It's the program that they've built, and we owe a lot to them. It's the least we can do to love on them and support them in any way we can."