Cheryl Maples, 69, dies, was advocate for gay rights in Arkansas 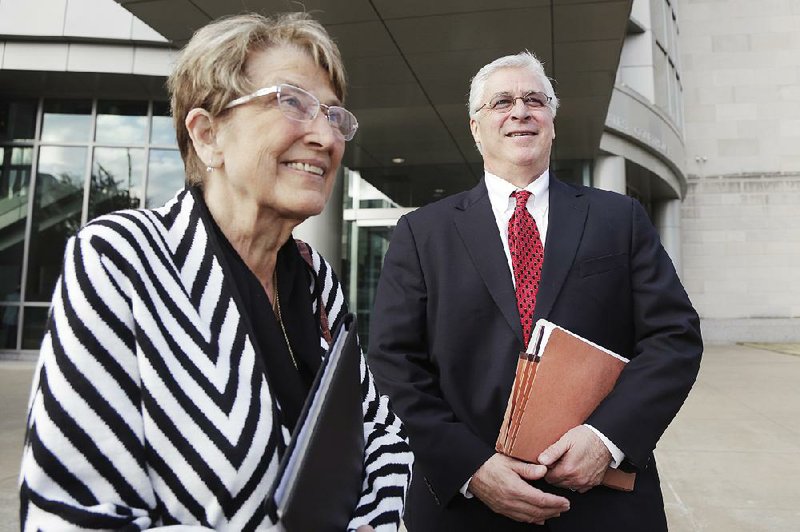 An attorney who led the fight for marriage equality in Arkansas died Thursday in Little Rock.

In 2014, the Heber Springs mother of five successfully challenged the state's ban on same-sex marriage, convincing a Pulaski County Circuit Court judge to strike down the measure. As a result, hundreds of gay couples were able to obtain marriage licenses in Arkansas.

Maples was on hand on May 10, 2014, when the first same-sex licenses were issued in Carroll County, acting as a witness for clients as they exchanged vows.

Arkansas was the first state in the South to recognize the right of gay people to marry, but the state Supreme Court blocked the issuance of licenses within a week.

More than 13 months later, with the case still pending before the Arkansas Supreme Court, the U.S. Supreme Court made the issue moot, striking down all of the nation's same-sex marriage bans.

By then, Maples had obtained ministerial credentials online, enabling her to officiate at weddings.

"She would cry during the weddings while she was performing them," said her daughter Melina Maples Granger. "She felt everything she ever did. Every one of her clients mattered to her."

Once gays had gained the right to marry, she continued to champion their rights in other areas.

Two years ago, she successfully challenged a state law that prevented gay parents from being listed on their child's birth certificate if they weren't the biological parent.

The U.S. Supreme Court would go on to strike down the statute, foregoing oral arguments.

The ruling came on June 26, 2017, the second anniversary of the Obergefell v. Hodges decision, which had cemented same-sex marriage in all 50 states.

"She just never stopped fighting. Never ever. I mean, she fought 'til the day she died," said Kelly Scott of Alexander, one of the parents who challenged the birth certificate law. "If she ... had had more time, there's no telling what she would've accomplished in the years to come."

More recently, Maples challenged Arkansas' HIV disclosure law, which requires those who have tested positive for the disease to warn sexual partners ahead of time of their status. Failure to follow the law is a felony, punishable by up to 30 years in prison.

Maples' client, Sanjay Johnson of Little Rock, was taking drugs to suppress the virus, reducing the chances of transmission to virtually zero, Maples said. After a Pulaski County circuit judge upheld the law, Johnson pleaded no contest to a reduced charge of aggravated assault. He received five years' probation and a $750 fine.

As word of Maples' death spread, friends and colleagues posted tributes on her Facebook page.

"Gays and lesbians in this country and in this state owe her a debt of gratitude that we will never, ever, ever be able to repay," said Sarah Scanlon, national LGBTQ outreach director for U.S. Sen. Bernie Sanders' 2016 presidential campaign. "She was beyond a champion. She was a saint, as far as I'm concerned."

Arkansas Attorney General Leslie Rutledge, who defended the laws that Maples challenged, said "Cheryl will be remembered as a tireless, zealous advocate for her clients."

Born in Santa Monica, Calif., Maples lived in Pacific Palisades before moving with her family to Fayetteville.

On the day of her high school graduation, she married a University of Arkansas, Fayetteville student, Richard Maples, the start of a union that would last 51 years.

After passing the bar, she began a legal career that would last 32 years.

From the beginning, she defended unpopular clients.

One of the most prominent was Arden Wilson. Prosecutors alleged the Beebe woman had given birth to a baby and then dumped its body in Vilonia.

Maples "stuck by her client from arrest to vindication," an Arkansas Democrat-Gazette editorial noted shortly after the charges had been dismissed.

The Wilson case attracted wide attention. But it was the marriage equality cases that cemented her place in the law books.

She never charged the gay couples in the marriage cases, her family said. Often, she provided her services for free.

"If somebody had a problem, she didn't turn them away," Maples Granger said. "She was a social worker with a law degree."

"She said she would've been a multimillionaire if she'd just collected all the money people owed her. She couldn't say 'no' to anybody and really [was] just the sweetest human being on earth," he said.

"This family that I'm surrounded by is keeping me afloat," he said.

Cheryl Maples, who had suffered a series of heart attacks over the past two decades, was in and out of the hospital during her final days.

But she traveled to Van Buren County on July 20 to conduct the wedding of two longtime clients -- Andrea Anita Warford and Jennifer Warford.

The newlywed says she'll always be grateful for Maples' advocacy.

"On Facebook, people are using the word 'Legend' for her," Warford said. "She went and fought and did things that nobody else had the guts to do. And it didn't matter what health situation she was in, if she had something going, she was doing it."

Information for this article was contributed by John Moritz and Bill Bowden of the Arkansas Democrat-Gazette.