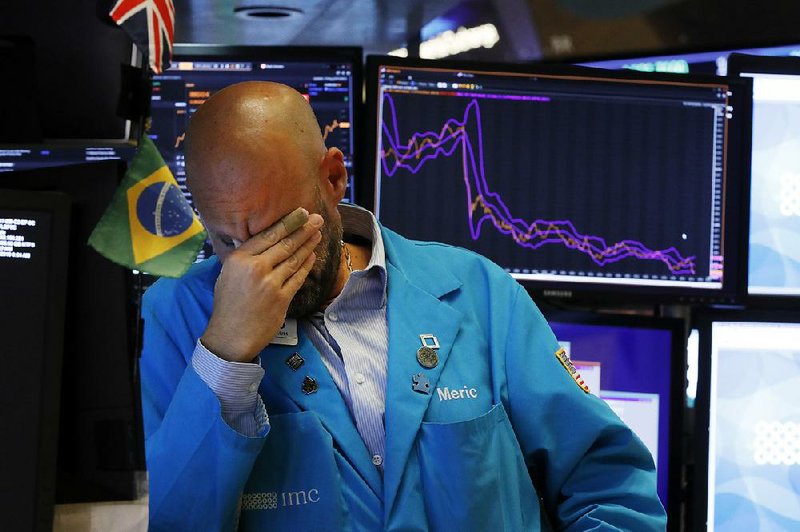 Specialist Meric Greenbaum takes a moment Friday on the floor of the New York Stock Exchange as stocks dived in a sweeping sell-off after China announced new tariffs on $75 billion in U.S. goods.

WASHINGTON -- President Donald Trump said Friday that he will increase taxes on all Chinese goods and "ordered" American companies to stop doing business with China after China retaliated against his next round of tariffs.

Trump, in a tweet, said he would raise tariffs on $250 billion worth of Chinese goods to 30% from the current rate of 25% beginning Oct. 1. And he said the United States would tax the remaining $300 billion worth of imports at a 15% rate, rather than the 10% he had initially planned. Those levies go into effect Sept. 1.

As economic damage from the yearlong dispute mounts, Trump has taken a scattershot approach to spurring the economy: calling on the Federal Reserve to cut interest rates, teasing the idea of tax cuts and, on Friday, commanding American companies to do his bidding against China.

"Our great American companies are hereby ordered to immediately start looking for an alternative to China, including bringing our companies HOME and making your products in the USA," he tweeted, adding "We don't need China and, frankly, would be far better off without them."

In a series of posts, Trump said the United States would be economically stronger without China and called the Fed chairman, Jerome Powell, an "enemy" of the United States and compared him to President Xi Jinping of China, his trade nemesis, after Powell declined to signal an imminent cut in interest rates.

"My only question is, who is our bigger enemy, Jay Powell or Chairman Xi?" the president tweeted.

Behind Friday's developments was the growing reality that the trade war is proving to be more difficult and economically damaging than the president envisioned. Trump's stiff tariffs on Chinese goods have been met with reciprocal levies, hurting American farmers and companies and contributing to a global slowdown.

On Friday, China said it would increase tariffs on $75 billion worth of American goods, including crude oil, automobiles and farm products like soybeans, pork and corn in response to Trump's plan to tax another $300 billion worth of Chinese goods in September and December.

Trump's response to China unnerved investors, who worry that the trade war between the world's two largest economies will further drag down global growth. Stocks fell sharply on Friday, with the S&P 500 closing down 2.6%. The Dow Jones industrial average was down 2.4% and the technology-heavy Nasdaq index fell 3%.

Trump also said he was directing the U.S. Postal Service and American companies like FedEx, Amazon and UPS to search packages from China for the opioid fentanyl and refuse delivery.

Liu Yuejin, deputy head of China's National Narcotics Control Commission, rebutted accusations from the U.S. that China is not doing enough to curb the flow of fentanyl, a highly addictive opioid painkiller, beyond its borders. Some American politicians "are upending the facts for their own political necessities," Liu said Friday in Beijing.

The White House does not have the authority to unilaterally "order" companies to stop doing business with China, and Trump's demand came under sharp and immediate criticism from the U.S. business community, which warned that halting sales with such a large trading partner would hurt American companies and the broader economy.

"U.S. companies have been ambassadors for positive changes to the Chinese economy that continue to benefit both our people," said Myron Brilliant, the head of international affairs at the U.S. Chamber of Commerce. "While we share the president's frustration, we believe that continued constructive engagement is the right way forward."

Retailers, which are bracing for pain from Trump's next round of tariffs, said the president's demands would hurt, not help, American businesses and the economy.

"It is unrealistic for American retailers to move out of the world's second-largest economy, as 95% of the world's consumers live outside our borders," said David French, the senior vice president for government affairs at the National Retail Federation. "It's impossible for businesses to plan for the future in this type of environment."

And farmers, who have borne the brunt of China's retaliation, said Trump's tactics were only making things worse.

"Every time Trump escalates his trade war, China calls his bluff -- and why would we expect any differently this time around?" said Roger Johnson, president of the National Farmers Union. "It's no surprise that farmers are again the target."

On Friday afternoon, the president hastily assembled his top trade advisers at the White House -- including Treasury Secretary Steven Mnuchin, who joined by telephone -- to settle on a response. The president was not aware that China's retaliation was coming and was angry about being blindsided, according to people familiar with the matter.

Trump's tweets on Friday caught most of his advisers and staff by surprise, and prompted alarm. Some of Trump's advisers privately expressed concern that the ferocity of Trump's response could derail the negotiations permanently and could unsettle supporters during an election year.

Trump's advisers believe he is being urged on by Peter Navarro, a trade adviser who has been the main proponent of continuing down an antagonistic path with China. Navarro tried to play down the escalation on Fox Business Network, saying Beijing's response was to be expected and would only galvanize support in the United States for Trump's tough approach to China.

"I just think that the way that China is reacting to this whole thing is simply reinforcing America's perception of China as a bad actor," said Navarro, who is considered the biggest China hawk in the administration. "When China tries to bully us, that only strengthens our resolve."

Navarro said the new tariffs that China was imposing were just a sliver of the overall U.S. economy and that they should not affect growth. He said that actions by central banks to cut interest rates were more significant to the global economy than the trade dispute between the United States and China.

He added that he expected the negotiations between the United States and China would resume in September.

David Dollar, a China expert at the Brookings Institution, said Trump's anger appeared disproportionate to the relatively modest retaliation from China that should have been anticipated. However, he said it was notable that Trump's order to companies appeared to take a page from Beijing's playbook.

"It's definitely outside the realm of a free-market economy," Dollar said of the call for businesses to cut ties with China. "It's typical of the kind of thing we complain about from China and other economies where a government intervenes outside the rule of law."

Trump's frustration appeared to be compounded by remarks from Powell, who did not suggest the Fed would undertake the kind of big interest rate cut that the president had been pressing for. Powell said that while another rate cut was possible, it was not guaranteed. And he suggested that the central bank's ability to keep the economic damage from the president's trade war at bay was somewhat limited.

Information for this article was contributed by Alan Rappeport and Keith Bradsher of The New York Times; by Joe Deaux and Jordyn Holman of Bloomberg News; by Taylor Telford, Gerry Shih, Rachel Siegel and Jeff Stein of The Washington Post; and by Paul Wiseman, Jill Colvin and Joe McDonald of The Associated Press.