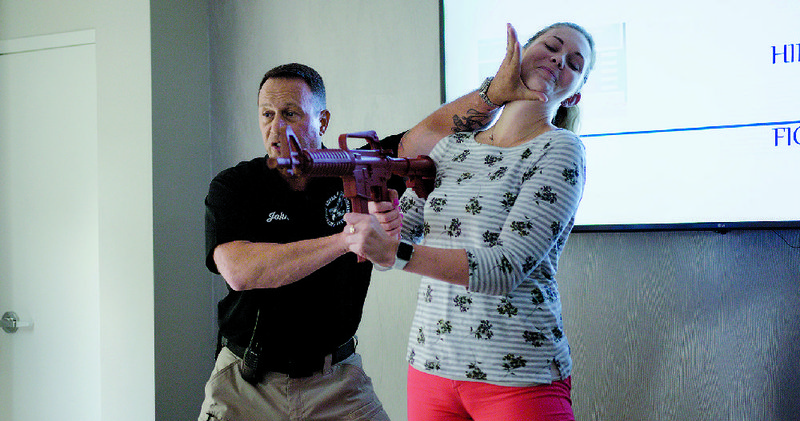 In this July photo provided by Market Mentors, LLC, John Nettis from PASS (left) demonstrates techniques for fighting with Amanda Moyer, director of account services at Market Mentors at the Market Mentors office in Springfield, Mass.

NEW YORK -- At a four-hour meeting in July, Michelle Abdow's staff got to experience some of the sights, sounds and even smells they could encounter if someone invaded their office and began shooting.

Security experts and local law enforcement officers gave Abdow's 23 staff members active shooter training -- explaining what could happen and what they could do to remain safe during a shooting at their company, public relations firm Market Mentors. The visitors acted out scenarios that helped the staff understand what a real shooting might be like.

"It was very intense, much more than most other training where people watch videos," says Abdow, whose company is based in Springfield, Mass. "But I surveyed everyone after, and there was not one negative comment. Everyone was grateful."

The shootings in public places in recent years have made many small business owners and managers aware that they and their staffers need to be educated about workplace violence. They need to know not only how to improve their chances of survival but also how to recognize any warning signs, a possibility if the assailant is a current or former employee or is involved in a domestic dispute with an employee. Security consultants and human resources providers say they're getting more inquiries and requests for training sessions following this month's shooting that killed 22 people and wounded dozens of others in an El Paso, Texas, Walmart -- than they did after previous mass shootings.

Engage PEO, a human resources provider, began getting more calls from small businesses after the February 2018 shooting at the Marjory Stoneman Douglas School in Parkland, Fla., that killed 17 students and staffers and wounded 17 others.

"It went from almost nothing to a regular occurrence," says Julie Cirillo, vice president of risk management at Hollywood, Florida-based Engage PEO. The inquiries range from asking about security cameras to a request for active shooter training for their staffs.

The shootings were on Abdow's mind when she asked one of her clients, a company that provides active shooter training, to come to her company.

The training opened with staffers listening to a recording of a 911 call made by employees when a former co-worker entered their workplace and began shooting. The trainers explained what the caller did right, and wrong, in reporting the incident. They talked about the mindset of a shooter during an attack, discussed ways of running and hiding, and gave tips like, silence your cellphone so the shooter can't hear where you are. During the course of the session, they fired a gun so staffers would know how gunshots sound and smell.

The trainers also went over Abdow's premises and pointed out hiding places. The local sheriff's department, recognizing that the meeting was likely to be anxiety-provoking, brought a therapy dog to ease everyone's stress.

Consultants like Cirillo advise business owners that the assessment of threats should begin internally -- most workplace shooters are disgruntled current or former employees or someone in a turbulent relationship with an employee. Bosses and employees should all be on the lookout for signs of trouble. In 2016, there were 394 people intentionally shot to death in U.S. companies, according to Labor Department statistics. Relatives or domestic partners were responsible for 40% of the women killed in the workplace.

Engage PEO advises owners on what to look out for with troubled staffers, including those who are in difficult or violent domestic situations.

"We tell them to be aware of signs and symptoms of employees or spouses, even colleagues and co-workers, to be aware to take every complaint and issue seriously," Cirillo says. For example, look for a change in a staffer's behavior. Employees also need to learn that if a co-worker says they're in a relationship that is or could turn violent, that the boss needs to know -- even if the information was shared in confidence.

But many times, employees are afraid to speak up.

"There needs to be some sort of way for employees to anonymously raise a red flag," says Heidi Wysocki, co-owner of First Defense Solutions, a security training firm based in Plano, Texas. While large companies have anonymous hotlines, smaller companies might want to use an anonymous texting program, she says.

Owners who learn that a staffer is struggling with personal issues should offer the company's resources -- for example, an Employee Assistance Program -- or be able to assist the employee in getting help. If a staffer is difficult, becomes moody or distant and the owner has any reason to fear violence, they should consult with a human resources provider or employment attorney.

While owners can become unnerved by high-profile shootings and consider getting their companies prepared, many don't follow through. Wysocki's company has gotten more inquiries from small business owners since the Walmart shooting, but concern is often soon replaced by denial.

"We get a lot of, 'I can't believe it can happen here,'" Wysocki says. Concerns about workplace violence led Wysocki and business partner Ed Pietrowski to found their security training firm after 14 people were killed and 22 others were wounded by two shooters at a workplace holiday party in San Bernardino, California, in December 2015.

The July 28 shooting that killed three people at a festival in Gilroy, Calif., convinced Earl Jones that he needed to make his new office in Sunnyvale, Calif., as secure as possible. He's planning to install a security system and get advice on how to make the insurance agency that bears his name safer.

Despite the randomness of mass shootings, Jones says he's aware that many workplace attacks have been at the hands of disgruntled or unhappy workers or relatives of workers.