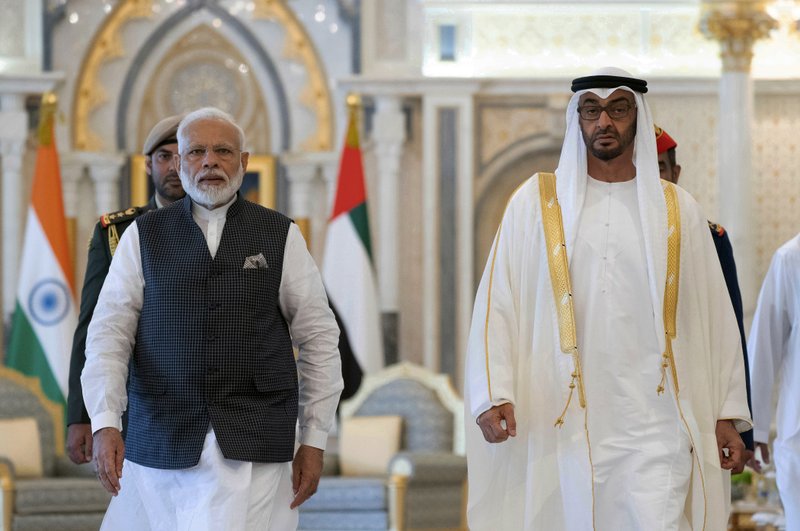 In this photograph made available by the state-run WAM news agency, Indian Prime Minister Narendra Modi, left, walks with Sheikh Mohammed bin Zayed Al Nahyan, right, in Abu Dhabi, United Arab Emirates, Saturday, Aug. 24, 2019. Modi is on a trip to both the United Arab Emirates and Bahrain, reinforcing ties between India and the Gulf Arab nations as he pursues stripping statehood from the disputed Muslim-majority region of Kashmir. (Ryan Carter - Ministry of Presidential Affairs/WAM via AP)

The induction of Modi into the Order of Zayed shows the importance the UAE places on India, the world's third-largest consumer of crude oil. India is home to a rapidly growing consumer market and labor pool that the federation of sheikhdoms relies on for its own economy.

Activists, however, decried the UAE bestowing the award on Modi as he pursues a clampdown on the Himalayan region claimed by both Pakistan and India. Modi later traveled to Bahrain, becoming the first Indian premier to visit the island nation.

"With several Gulf states in an ever-tightening embrace with Modi, human rights have been discarded in favor of economic opportunities," wrote Samah Hadid, a Beirut-based human rights advocate.

Abu Dhabi's crown prince, Sheikh Mohammed bin Zayed Al Nahyan, personally put the golden medal around Modi's neck during an event that was closed to press in Abu Dhabi, the Emirati capital. With a portrait of Sheikh Zayed bin Sultan Al Nahyan, the UAE's first president for whom the order is named, behind them, the two men shook and held hands for a moment and spoke quietly.

"You deserve it," Sheikh Mohammed told Modi at one point while posing for photos.

Modi had been announced as a recipient of the prize in April in a tweet from Sheikh Mohammed.

"We have historical and comprehensive strategic ties with India, reinforced by the pivotal role of my dear friend, Prime Minister Narendra Modi, who gave these relations a big boost," a tweet from his account read.

"We've never had it like this before," Abdulla said. "From there, everything circles down."

Even without the personal touch, India has for decades been a major point of trade for the UAE, from trade routes to gold smuggling.

Some 3.1 million Indians now call the UAE home, ranging from laborers to multimillionaires, according to Indian government statistics. By comparison, estimates suggest there are only around 1 million Emiratis living in the country of more than 9 million.

Across the wider Gulf Cooperation Council, which includes six Gulf Arab nations, there are 8.5 million Indians. They send billions of dollars a year in remittances back home.

That, coupled with cooperation on political and defense matters, makes India ever-more important for the UAE and other Gulf Arab states.

The timing of the award, however, comes amid Modi's push in Kashmir.

On Aug. 5, Modi's government revoked a decades-old special status granted to Kashmir and deployed thousands of troops the region. Indian-controlled Kashmir has been under a sweeping military curfew since then that has seen thousands detained and residents cut off from all communication and the internet.

Pakistan and India, both nuclear-armed nations, have fought two wars over control of Kashmir since they won independence from the British in 1947.

Although Modi's decision affects Muslims living in Indian-controlled Kashmir, the move has drawn a largely muted response from Gulf Arab nations. The UAE's ambassador to India in particular referred to Kashmir as an internal issue for India.

Others, like British parliamentarian Naz Shah from the Labor party, see it differently. She published an open letter addressed to Sheikh Mohammed asking him to reconsider giving the award due to the "brutality" she described Modi as directing.

"I ask you to question this decision and reconsider giving such an award, not only because the majority of the Kashmiri people share the same faith as you, but because we have a duty as human beings to stand up against the disregard of human rights and evil," Shah wrote.

Pakistan, which also has close ties to both the UAE and Saudi Arabia, had no immediate comment to the prize being awarded to Modi.