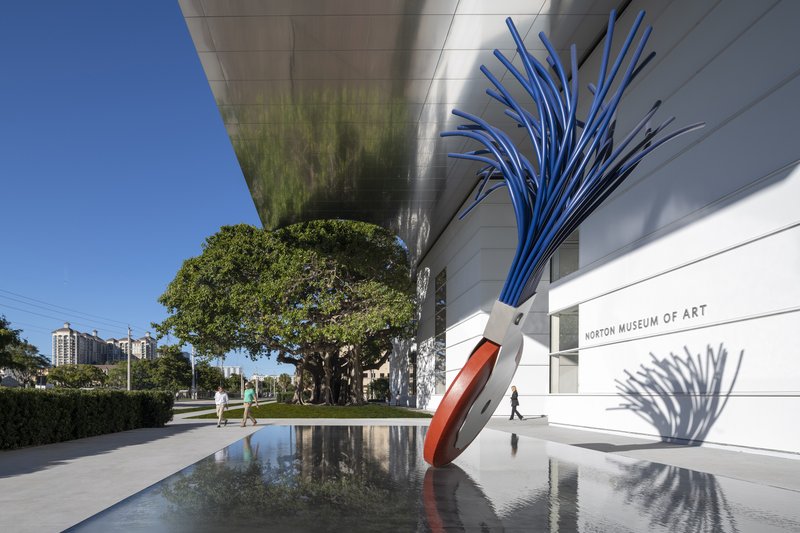 PALM BEACH, Fla. — What do you think of when you hear Palm Beach mentioned as a travel destination — other than that you probably can't afford it? Mar-a-Lago and the Trump clan? Worth Avenue and its phalanx of uber-expensive fashionable stores? A mecca for international jet-setters, once favored by the Duke and Duchess of Windsor, the Kennedys, and various Vanderbilts, Whitneys and Astors?

OK, fair enough, but now meet the Palm Beaches, a colorful melange of Japanese gardens, a landmark lighthouse, a theater founded by a Hollywood icon, an elegant high tea equaling anything offered in Blighty, a historic house built by a legendary railroad magnate and a museum where the art is unique, to say the least. And just to be clear, you definitely can afford it.

Palm Beach County, the largest in Florida, consists of 39 special cities and towns. And all of them seem to have one thing in common, and it's not the 47 miles of pristine beaches.

The one thing that always shines in the Palm Beaches is the arts, with 42,000 annual cultural events. From the Street Painting Festival in Lake Worth to the Kravis Center for the Performing Arts in West Palm Beach, the county offers a smorgasbord of tasty offerings for culture vultures.

Visitors to the Norton Museum of Art in West Palm Beach often do a double-take at the 19-foot tall circular disc with an extending sweep of thick brushes rising from a reflecting pool at the front entrance. Millennials will scratch their heads and wonder what it is. Their parents can smugly inform them that it's a typewriter eraser, although this one is made of stainless steel and fiberglass and weighs in excess of 10,000 pounds.

Expect this type of whimsy from the Norton, recently re-opened after a transformative expansion by Pritzker Prize-winning architect Lord Norman Foster. But also expect a world-class collection of European, Chinese, American and contemporary art, as well as a dazzling display of photography and a sculpture garden where pieces are set amid lush tropical vegetation.

A different type of vegetation provides the stunning landscape for Morikami Museum and Japanese Gardens in Delray Beach. Serenity is the keyword as gardengoers stroll through Roji-en: Gardens of the Drops of Dew, encompassing six different periods of Japanese gardening over a one-mile meander.

Inside the museum, the centerpiece is the Seishin-an Tea House, a rustic model designed to showcase the harmony, respect, purity and tranquility of the tea ceremony. The museum has changing exhibitions, and special events such as the Kite and Lantern festivals and the summer sushi strolls enhance the garden experience.

For another peaceful garden experience, take a leisurely wander through the Society of the Four Arts garden, located on the island of Palm Beach itself. The gardens, representing literature, dance, music and painting, offer secluded nooks to pause and reflect on how important the arts are to any community. 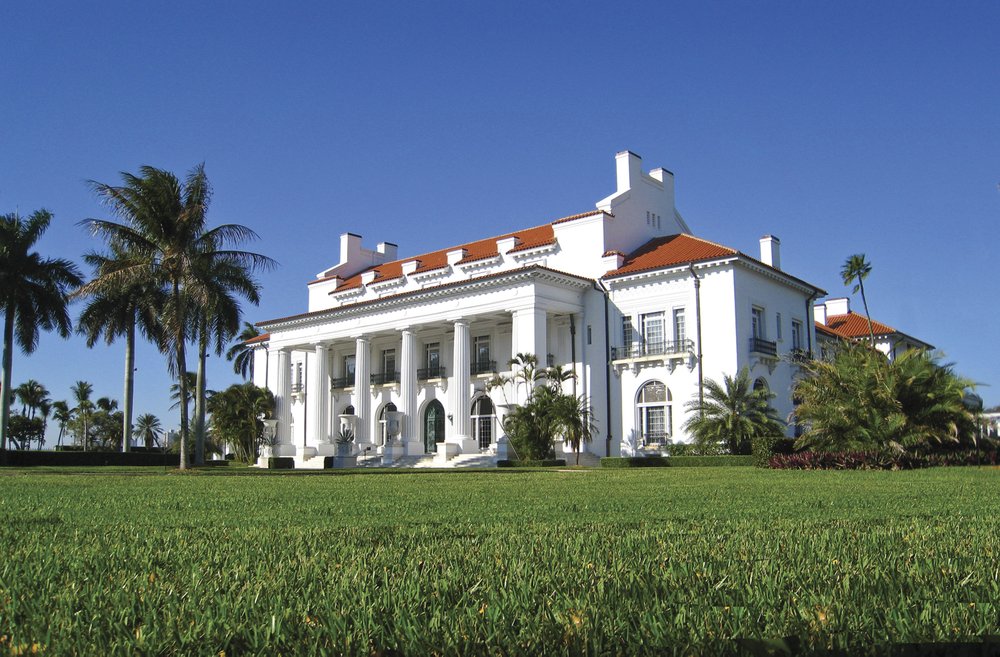 Whitehall, Henry Flagler's estate in Palm Beach, FL, is a National Historic Landmark and open to the public as the Henry Morrison Flagler Museum. It was built in 1902. (Photo courtesy the Flagler Museum 2019 via TNS)

Stay on the island to tour the opulent Flagler Museum. Henry Flagler, whose railroad linked the entire east coast of Florida from Jacksonville to Key West, is often credited with putting Palm Beach on the map.

In 1902, he built the white-columned, 75-room Whitehall as a wedding present for his third wife, Mary Lily Kenan, a North Carolina belle. F. Scott Fitzgerald might have had Flagler in mind when he penned the words, "the rich are different from you and me."

That difference is obvious in the grandeur of the 5,000-square-foot reception hall, considered the largest and grandest of any room in a private home from the Gilded Age. Just how gilded that age was is obvious in the sweeping central staircase and the ceiling painting of the Oracle of Delphi imparting the god Apollo's message of inspiration through art and literature.

Other rooms that inspire awe are the Louis XV-style Grand Ballroom, where every year Flagler and his wife would host a lavish ball on George Washington's birthday, and the Music Room where Mary Lily liked to host regular salons. Who could blame her for wanting to show off the 1,249-pipe organ, where at the beginning of each social season a resident organist was hired to entertain guests? Even Mar-a-Lago can't claim that kind of extravagance.

From the Gilded Age to the laid-back casual vibes of modern Florida, head to the town of Jupiter, and try to snag a table at UTiki Beach (they don't take reservations, and it can be a long wait.)

Funky U-Tiki's more sophisticated sister, the neighboring Jetty's, is a bit easier (but still a wait). Why all the fuss? In addition to fresh seafood, both restaurants offer a smashing view of the Jupiter Lighthouse (listed on the National Register of Historic Places) and the spectacular sunsets which make the vivid red lighthouse even more striking silhouetted against the sky.

Jupiter is also the location of the Maltz Jupiter Theatre which brings Broadway to South Florida and is best known for having begun its life as a dinner theater founded by Florida native and Hollywood superstar Burt Reynolds.

Travelers can't live by culture alone, no matter how rich the offerings. They also need lodging, food, drink and the occasional indulgence — all of which the Palm Beaches offer. 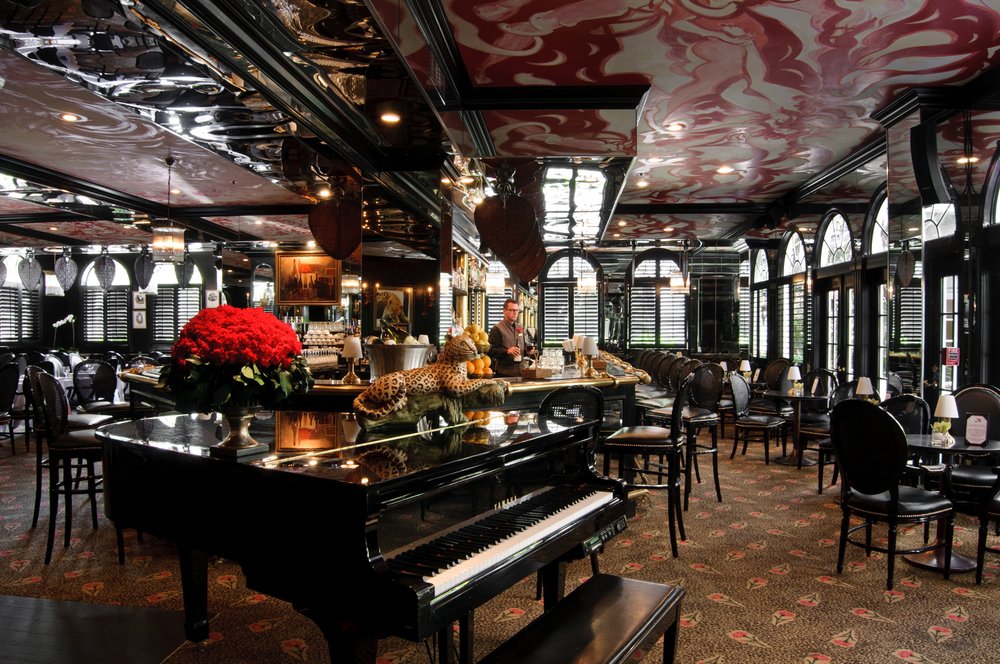 The Chesterfield Hotel on Palm Beach's Coconut Row, just steps from ultra-chic Worth Avenue, might remind you of a tropical outpost of the British Empire — with good reason. The 53-room hotel is the only American property of the London-based luxury hotel group Red Carnation.

In addition to its individually decorated rooms and suites, the Chesterfield has one of the island's hippest nightspots, the Leopard Bar — an intimate piano bar during the cocktail hour and an upscale disco once the sun goes down.

It's the afternoon tea, however, that really shows off the Chesterfield's British roots. Book a table in the small library and treat yourself to an array of sandwiches, scones and pastries, all accompanied by a selection of teas.

Dining options abound — from casual (Pizza Al Fresco in a charming tree-shaded patio setting) to more luxe offerings (Cafe Boulud in the posh Brazilian Court Hotel.) New York-based super chef Daniel Boulud has created a foodie paradise in south Florida, offering everything from caviar and foie gras to the bounty of the state's waters (try the peekytoe crab with fennel or the yellowtail snapper with fava beans, artichokes and cilantro pesto.)

If there is one dining establishment you can't leave the Beaches without experiencing it's the rooftop restaurant at Restoration Hardware. Don't let the name fool you — this is no mere spot to stop in for a screwdriver or a roll of duct tape.

The upscale establishment, with several floors of museum-like rooms filled with quality home furnishings, would make Chip and Joanna drool. Even if you don't need a new sofa or wall hanging, it's worth a look and the opulent restaurant is worth several looks.

Tables are scattered around a Baroque-style fountain while assorted trees and sparkling chandeliers add to the ambience, and floor-to-ceiling windows provide a city vista. Oh yes, the food is good too.

I booked a treatment at the luxurious spa, 42,000-square-feet of what has been described as "a place of fairy tales and wishing wells." There's an oversize chessboard in the lush courtyard and hammock-like chairs suspended over a pool where you can sip champagne and lazily swing your cares away.

Pick your favorite scent, color and music, and before entering one of the 19 treatment rooms, pause at the Wishing Well to light a candle and make a wish. (The only criterion is that it must be about you.) The Eau Spa is one place where self-indulgence is not only encouraged, but required.

So, the next time someone tells you they have been to Palm Beach, respond with "yes, but I've been to the Palm Beaches."