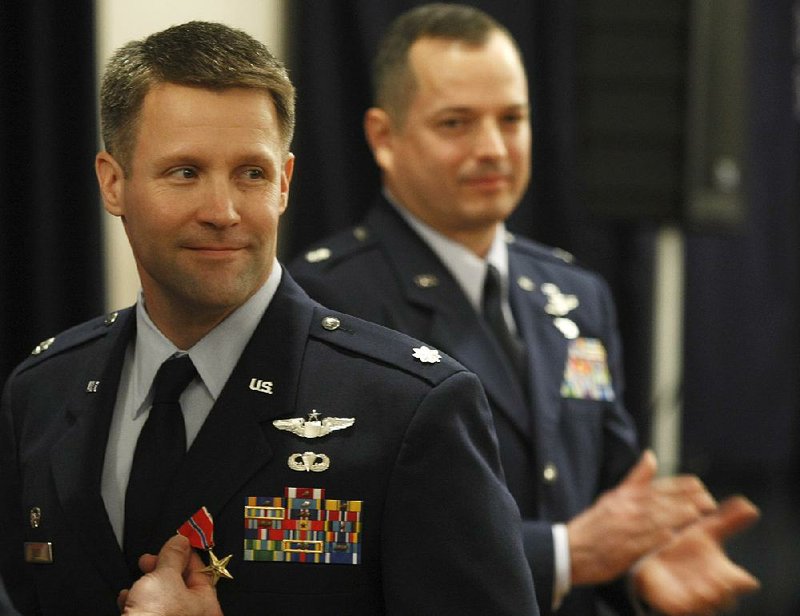 Brig. Gen. Daniel Tulley (left), who ended a stint as commander of the 41st Airlift Squadron at Little Rock Air Force Base in 2009, is now commander of the 379th Air Expeditionary Wing at Al Udeid air base in Qatar, the largest U.S. military base in the Middle East.

AL UDEID, Qatar -- President Donald Trump's administration has moved to pull back troops from conflict zones like Syria and Afghanistan. But at Al Udeid, home to the largest U.S. military base in the Middle East, there is no sense of retreat.

Vast sums are being spent to improve a sprawling air base, making it not only more central to the U.S. military posture, but also more permanent.

U.S. officials are cautious about the language they use to describe the work at the site, dubbing it an upgrade, while Qatari officials call it an expansion. Though there have been no plans announced to send more troops to the base, it could accommodate considerably more than the 10,000 there on any given day.

Trump has said he wants to end American involvement in "endless wars" around the world, but the United States remains deeply involved in a variety of regional conflicts in the Middle East and faces rising tension with Iran.

Brig. Gen. Daniel Tulley, commander of the 379th Air Expeditionary Wing, said in an interview that U.S. military operations at Al Udeid are "every bit as complicated" as they were at the height of the wars in Iraq and Afghanistan, with high-end military hardware like F-22 fighters and B-52 bombers deployed to Qatar this year.

The United States now faces five major challenges in the region, Tulley said: The conflict in Afghanistan; tensions with Iran; the threat posed by the remains of the Islamic State in Syria and Iraq; the precarious situation in northern Syria, where U.S.-backed Kurdish forces are in control; and the war in Yemen, where a Saudi-led coalition is supported by the United States.

"It's a tremendously strategic location, right in the center of everything," he said of Al Udeid.

In a region sensitive about the presence of U.S. military forces, it is notable that Qatar is not only allowing the expansion, but also funding it and managing the construction, at a price tag estimated as high as $1.8 billion.

Diplomats from rival Persian Gulf nations say Qatar's enthusiastic effort to expand Al Udeid, along with the country's purchases of U.S. military equipment estimated to be worth tens of billion of dollars, are attempts to use the country's vast wealth from natural gas to curry favor with the Trump administration at a time when Qatar is isolated by other U.S. allies in the region.

Several military officials said the scale of construction at Al Udeid and Qatar's supervisory role in the project are unusual. "It's a completely new thing" for the Defense Department, Tulley said.

Al Udeid, a half-hour drive from downtown Doha's palm-lined promenade and crystal-blue waters, sits in the inhospitable environment of the Qatari desert, where temperatures reach 130 degrees in the summer.

The buildings are relentlessly beige, an austere aesthetic reflecting the fact that much of the base had been built cheaply and quickly.

Central Command moved its forward operating base there in 2003, after concerns about a backlash in Saudi Arabia over the large-scale U.S. presence at Prince Sultan Air Base. "Expeditionary has become enduring," Tulley said.

Tulley pointed toward a structure known as the Lima sunshade, which uses tenting fabric to keep planes out of the scorching sun, as evidence of the base's ad hoc arrangement. The tarp was torn and tattered.

"The way money flows between Congress and the [Defense Department] leads to things like that," Tulley said.

Many of the service members on the site live in "trailers," temporary structures that provide little in the way of comfort. The single-story buildings lack indoor plumbing, and their overworked air-conditioning units are prone to starting fires; glazed external windows have to be covered to prevent shattering, in part because of the threat of Iranian missiles.

Under the reconstruction project, which has been subcontracted to a Texas management firm called Prime and a Turkish construction company called Bahadir, the aim is to get everyone out of the trailers within two years and into more modern buildings.

Work on the base will enhance quality of life for American troops and "improve the lethality of our missions," according to Army Maj. Beth Riordan, a spokeswoman for U.S. Central Command.

Most important to the United States, Tulley said, were improvements to operational functions. The base has already brought its procedures in line with NATO bases in Europe, he explained, with the hope that Qatar's own air force might be able to operate in line with NATO allies in the future.

Qatar remains under blockade by Saudi Arabia and the United Arab Emirates, both important U.S. allies in the region who host American troops at their own bases.

When Saudi Arabia and other Arab nations broke with Qatar in June 2017, there was speculation that Al Udeid would suffer. But U.S. military officials say there has been only minor disruption to American activities in the region.

Qatar has used the blockade to strengthen its military relationship with the United States. "Everything has changed for Qatar," Maj. Gen. Nasser al-Attiyah, a spokesman for the Defense Ministry, explained. "Before the blockade is one thing, and after the blockade is another."

Washington has noticed. Last month, Trump welcomed the emir of Qatar to the White House, where he praised him for buying "tremendous amounts of military equipment" and described Al-Udeid Air Base as "incredible ... right in the middle of the Middle East."

But U.S. relations with Qatar are not frictionless.

As recently as March, Qatari Foreign Minister Sheikh Mohammed bin Abdulrahman al-Thani said his country was considering buying Russia's S-400 missile defense system. A Western diplomat, speaking on the condition of anonymity to discuss the sensitive topic, said no movement had been seen on that issue but suggested it would be a major problem if it went ahead.

Qatar also maintains ties to Iran. "Iran is a neighbor, and we have to treat it like it is," Attiyah said. He added that Qatar would need to stay neutral in the dispute between the United States and Iran and declined to say whether Qatar would allow the United States to strike Iranian targets from Al Udeid.

Brian Katulis, a senior fellow at the Center for American Progress who worked on the National Security Council and at the State and Defense departments during President Bill Clinton's administration, said the expansion of the base showed the contradictions of Trump's military policy.

"In the Middle East, and around the world, Trump speaks of these security partnerships with America like a protection racket," Katulis said, with little discussion of the strategic purpose for troops abroad. "What is this all for? What's next?"

What seems certain is that the base won't disappear anytime soon. Attiyah said the military relationship would endure for at least another 20 years under a strategic agreement the United States and Qatar reached last year.

He added that Qatar was planning to build new facilities at the site to entice senior officers to move their families from Doha to the base. But Tulley said the Pentagon had balked on this plan.

"It's a great gesture, but we're not ready yet," Tulley said. "It never ceases to amaze Americans how gracious our hosts are here."