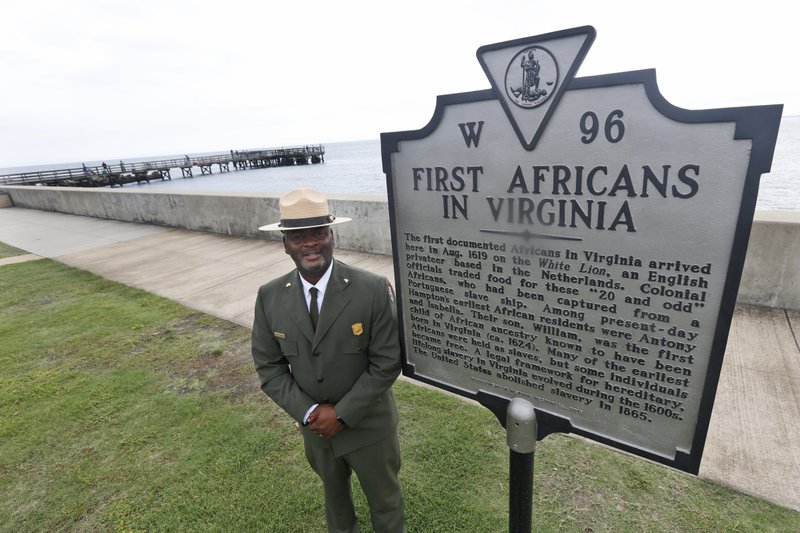 Terry E. Brown, Superintendent of the Fort Monroe National Monument poses next to a historical marker that signifies the spot of the first landing of Africans in America 400 years ago at Fort Monroe in Hampton, Va., Thursday, Aug. 15, 2019. (AP Photo/Steve Helber)

HAMPTON, Va. -- Virginia Gov. Ralph Northam announced Saturday a new state commission to review educational standards for teaching black history in the state, as officials observed the arrival 400 years ago of enslaved Africans to what is now Virginia.

Northam, who noted "we are a state that for too long has told a false story of ourselves," spoke at the 2019 African Landing Commemorative Ceremony in Hampton.

The event was part of a weekend of ceremonies that are unfolding in the backdrop of rising white nationalism across the country and a lingering scandal surrounding Northam and a blackface photo.

Northam said he signed a directive to create the commission to review instructional practices, content and resources currently used to teach black history in the state.

"We often fail to draw the connecting lines from those past events to our present day, but to move forward, that is what we must do," Northam, a Democrat, said. "We know that racism and discrimination aren't locked in the past. They weren't solved with the Civil Rights Act. They didn't disappear. They merely evolved."

In February, Northam faced intense pressure to resign after a picture surfaced from his 1984 medical school yearbook page showing a man in blackface next to someone in Ku Klux Klan clothing.

He denied being in the picture but admitted to wearing blackface as a young man while portraying Michael Jackson at a dance party in the 1980s.

On Saturday, Northam said he has met with people around the state over the past several months to listen to views about inequities that still exist, prompting him to confront "some painful truths."

"Among those truths was my own incomplete understanding regarding race and equity," Northam said. "I have learned a great deal from those discussions, and I have more to learn, but I also learned that the more I know, the more I can do."

The event was held on Chesapeake Bay, where ships traded men and women from what's now Angola for supplies from English colonists. The landing in August 1619 is considered a pivotal moment that presaged a system of race-based slavery.

"The legacy of racism continues not just in isolated incidents, but as part of a system that touches every person and every aspect of our lives, whether we know it or not, and if we're serious about righting the wrong that began here at this place we need to do more than talk," Northam said. "We need to take action."

U.S. Rep. Karen Bass, who chairs the Congressional Black Caucus and attended the event, said it was important to hear the truth about the nation's past "not just the parts that make us feel good, but the difficult parts as well."

"The sad thing about our nation and why we continue to have the issues we do is because we have denied part of our history, and I believe that if the entire nation could experience, could learn and understand our true and full history, we might not be witnessing the resurrection of hate," said Bass, D-Calif.

Saturday's event was one of several commemorating the arrival. A family that traces its roots to those first-arriving Africans gathered at a cemetery Friday.

A bell will ring at the landing spot during today's "Healing Day."

Bells also are scheduled to ring today in Vicksburg National Military Park -- a Civil War battleground in Mississippi -- as well as during events in Alabama.