Why do we hiccup? Scientists really don’t know 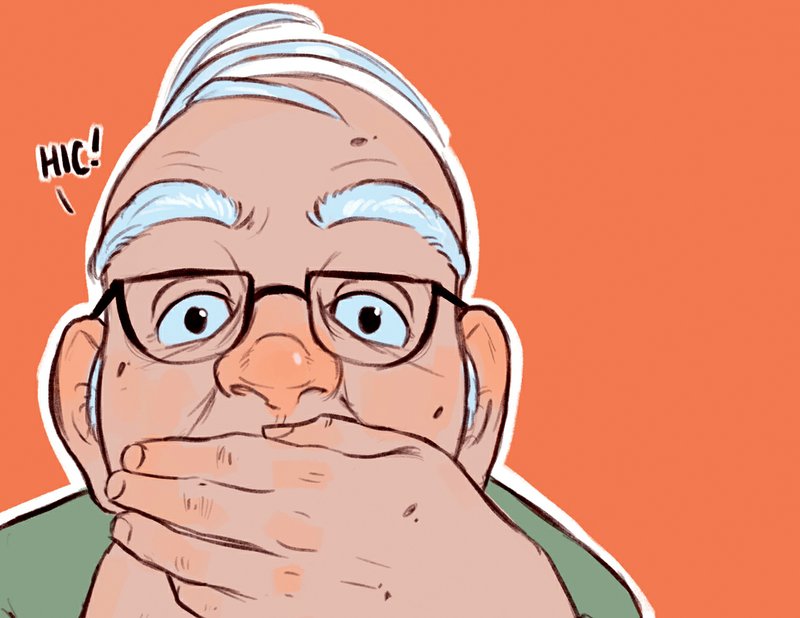 Maybe it was because when the waiter asked, "Still or sparkling?" you chose sparkling. It could have also been that you were ravenous and ate a little too much. Or, possibly, it was your ex, who happened to be dining at the same restaurant and stood a little too long over your table making awkward small talk.

All of these, hic, might cause spasms, hic, in your diaphragm, hic.

Referred to in the medical literature as singultus (from the Latin for gasp or sob), hiccups are familiar to anyone who has ever taken a breath. In fact, you began to hiccup while still in the womb. Most people hiccup the most during childhood, with the bouts becoming less frequent over time. But even in adulthood, hiccups are still a common, and annoying, occurrence.

Just as we all have our own particular way of sneezing, we all have a unique way of hiccuping that can range from four to 60 hiccups per minute.

Most hiccups are benign and last only a few minutes or hours. But sometimes hiccups are indicative of a more serious health issue, particularly when they recur or don't go away for days, weeks or years. Beyond being embarrassing, the muscle contractions can be physically exhausting. They can interrupt sleep and make it hard to eat.

About 4,000 people in the United States are admitted to the hospital every year for hiccups.

The patient with the longest recorded case, according to Guinness World Records, was Charles Osborne of Anthon, Iowa, who hiccuped for 68 years straight. He claimed it started while he was trying to weigh a hog before slaughtering it.

Doctors say there are as many causes for hiccups as there are crazy remedies, including tugging on your tongue, standing on your head and swallowing granulated sugar. Some actually work. Others are more likely just entertainment for friends and family who watch while you try to cure yourself.

Everyone gets the hiccups, and yet they still aren't well understood. "Things that are not that dangerous don't get studied as much," said Dr. John Cullen, a family physician in Valdez, Alaska, who is also president of the American Academy of Family Physicians. He sees his fair share of patients with persistent hiccups, including fetuses hiccuping on ultrasounds as early as 17 or 18 weeks.

"Parents get concerned when their babies hiccup a lot, both before and after they are born," he said. "But I tell them it's probably a good thing because we think it may help develop their lungs."

Scientists do know that when you hiccup, there is a sudden, involuntary contraction of the diaphragm as well as the muscles between the ribs. This causes a rapid intake of air (hic) which provokes a quick and noisy closure of the glottis (up). The diaphragm is a domelike sheet of muscle that separates the chest cavity from the abdominal cavity, whereas the glottis is an opening between the vocal folds in the larynx that snaps shut when we are eating to keep food from entering the lungs.

The muscle spasm followed by the quick closing of the larynx is what causes the characteristic bodily jerk-and-relax sequence.

When babies hiccup in utero, one theory goes, they are basically doing lung calisthenics to prepare for breathing once they are born. Another theory is that hiccups are a holdover from humanity's amphibian ancestors, as the motor pattern of hiccups is similar to that of animals such as frogs, which need to rapidly close off different respiratory pathways depending on whether they are breathing air or water.

Experts tend to agree that there is a hiccup reflex arc, or circuit, that includes the vagus and phrenic nerves. Together these nerves extend from the brain stem into the abdomen, with branches that reach the diaphragm and many internal organs including the stomach, intestines, spleen, liver, lungs and kidneys. "If you have irritation anywhere along that circuit, you can get the hiccups," said Mark Fox, a professor of gastroenterology at the University of Zurich and an author of a comprehensive literature review on hiccups.

One of the most common causes of hiccups, he said, is a distended stomach. The stomach sits just under the diaphragm. If your stomach gets too full, either with food or gas bubbles, it can stimulate the vagus or phrenic nerves and prompt hiccups. This poses a problem for those who have switched from sugary sodas to less caloric sparkling water because the latter tends to have sharper and more insistent bubbles, which can lead to more hiccuping.

But really, anything that upsets or aggravates your digestive or respiratory tracts can induce hiccups. Such as eating very hot or spicy foods. Or maybe eating too fast and gulping in air at the same time.

You can get hiccups from drinking alcohol, smoking cigarettes, vaping and taking recreational drugs or prescription opiates. Laughing really hard, talking excitedly and shaving or stroking your throat can also set your diaphragm spasming. So can stress and anxiety, lack of sleep, mineral deficiencies, electrolyte imbalances and poor posture.

Rarer causes are pneumonia and tumors in the brain, stomach, lungs or diaphragm. People with neurological disorders such as Parkinson's disease and multiple sclerosis can have more frequent bouts of hiccups. The same is true of people with diabetes and kidney disease. The hiccuping can be caused by the diseases themselves, or it can be a side effect of the drugs used to treat the diseases.

For treating persistent or troubling hiccups, Dr. Scott Gabbard, a gastroenterologist at the Cleveland Clinic, said it's best to take care of the underlying cause if you can identify it. Examples might be drinking still instead of sparkling water, avoiding spicy foods, eating several small meals throughout the day or breathing in a controlled manner when you're feeling overwhelmed. Taking medication to control gastrointestinal reflux can also be helpful if heartburn is the problem.

But with a lot of patients, Gabbard said, the cause is unclear: "There's irritation somewhere, but we don't know where or why."

That's when people, if they are bothered enough, start to try therapies, some quite odd, that the scientific literature or anecdote suggests might work. Most people know about holding their breath on the exhale or breathing into a paper bag, which are both based on the idea that increasing the amount of carbon dioxide in the blood will stop hiccuping.

Other remedies are meant to essentially goose your vagus or phrenic nerves to break the hiccup cycle. These include having someone scare you or swallowing dry bread, crushed ice or peanut butter. You can also pull on your tongue, suck on a lemon wedge, make yourself gag or press on your eyes. One study, awarded the humorous Ig Nobel Prize, reported cessation of hiccups following digital rectal massage; and another case study suggests an orgasm might do the trick.

For the most extreme cases, sedatives, muscle relaxants or anti-seizure medications might be prescribed. Some patients have numbing agents injected along their phrenic or vagus nerves or get a neuromodulation device implanted that stimulates the vagus nerve.

But these invasive therapies are a last resort, and the adverse side effects can sometimes be worse than the hiccups.

As for Osborne, who hiccuped for almost 70 years, he learned to live with it after trying various remedies and seeing multiple specialists.

But that didn't stop his friends from trying to help him. He told an interviewer that one of his buddies once fired off a shotgun right behind him. "It scared me some," Osborne said, "but it didn't scare the hiccups out of me."

Print Headline: Why do we hiccup? Scientists really don’t know