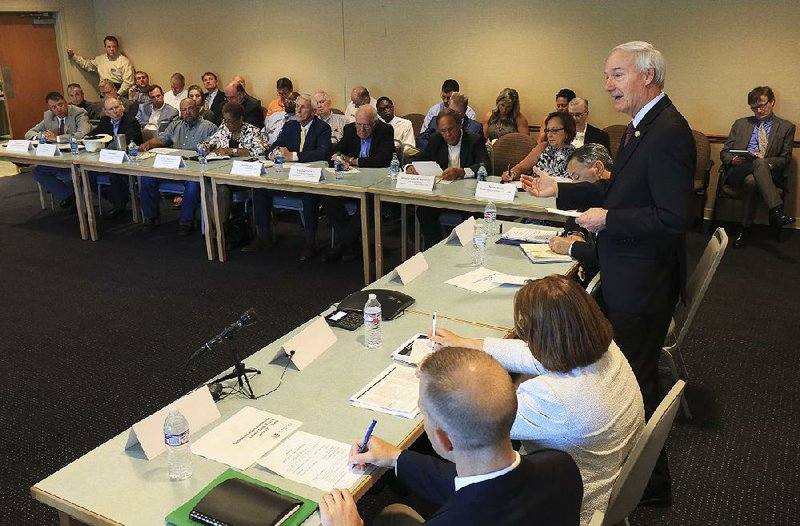 FILE — Gov. Asa Hutchinson speaks during the first meeting of the Arkansas Levee Task Force that he established after spring 2019's historic flooding in Arkansas.

But some in attendance at the group's third meeting said consolidating districts is not as easy as it sounds.

A central frustration for state leaders attempting to find a solution to levee-related flood damage is the lack of levee district oversight. That has in part allowed some levee districts to go defunct for years, neglecting maintenance of their levees and leaving them at risk for flood damage locals can't afford to fix.

Much of Monday's discussion hovered around levee districts' lack of liability for property damages and limited accountability.

County Judge Mark Thone of Yell County, which experienced a major breach of an unmanaged levee in this spring's historic flooding, floated the idea of consolidating levee districts into a single county district or having an oversight committee that meets annually. He also suggested an Arkansas River levee board to oversee the levees along the river.

"I don't think any functional levee district is going to look kindly on consolidating with a nonfunctional neighbor district," said Mike Lowe, a farmer in Miller County.

Thone contended that a larger oversight board would incentivize individual districts within it to do their work.

Some districts have successfully managed their levees for decades and will receive U.S. Army Corps of Engineers assistance and funding to rehabilitate their levees after damage sustained during the flooding. For abandoned levee districts, those resources will not be available.

For that reason, Gov. Asa Hutchinson has asked lawmakers to make $10 million available for which districts can apply to repair their levees.

Arkansas has more than 100 levee districts, based on reports submitted to the Arkansas Natural Resources Commission and records from the U.S. Army Corps of Engineers and the Federal Emergency Management Administration.

A precise number of districts is difficult to determine because some districts known to one agency are not known to another, and officials suspect some may not have filed reports. The Corps is currently conducting an inventory of levees across the United States, although officials believe they know of most major levees.

Hutchinson's 25-member levee task force is responsible for evaluating the state's levees and suggesting improvements to assist with their oversight, management and funding. Hutchinson ordered the task force formed after this spring's Arkansas River flooding, which breached at least one levee and damaged several others.

Task force members heard Monday from Alan King, director of Improvement Districts Inc., who explained that improvement districts overseeing levees can be formed under several separate state statutes that make different requirements. They require varying reports, most of which are never filed past county government level.

On Monday, members passed around a proposed format for a levee status report that all levee districts would submit to the state. It would detail -- among other things -- debts, contracts, tax assessments, meetings, board members, district boundaries, expenses and the levees' greatest needs.

They also talked about creating a handbook for county officials to use to know what to expect of levee districts.

Sen. Jason Rapert, R-Conway, who attended the meeting via telephone, said legislation can be crafted to avoid harming functioning districts, instead targeting cleanup of those that are not maintaining their levees or reporting to the state.

Others argued that consolidation would marry levee districts with different constituencies, whose structures don't touch.

Levees, though near one another, can have different structures and challenges, said Rob Rash, a St. Francis Levee Board member.

Hal Kemp, an engineer in Pulaski County, noted that the Riverdale Levee Improvement District near the Big Dam Bridge is different from the one protecting the city's airport on its eastern industrial side.

Matt Skvarla, a co-owner of Riverwalk Apartments in Riverdale, said the levees should be in the same district. He had a $300,000 sinking structural issue that turned into a $4 million to $5 million problem after the flooding.

The issue with levee management appears to be small nets with which to capture tax assessments to fund the districts, Skvarla said.

Levee districts may assess millages on the property taxes of the land and homeowners protected by the levee. Over time, assessments have been incorrectly left off many properties because of districts' failure to submit their annual assessment lists to the county assessor or tax collector, King told task force members during his presentation.

Little Rock residents have an interest in the levee that protects the city's airport, Skvarla said.

Skvarla, who identifies as a staunch Republican opposed to taxes, said a wider constituency could catch more funding at more manageable rates for taxpayers.

"I don't know why that doesn't make sense," he said.

If counties have underfunded levees and districts have little liability, Skvarla said, "wouldn't it be easier to manage a lot less districts, from your perspective?"

The continuity of the St. Francis Levee has made its oversight of eight counties appropriate, Rash said.

Rash's board is unique in that board members are elected, and the board has been required to submit reports on the levee to the governor's office since 1893.

Other levee districts have been required to only submit brief reports since 2017 to the Arkansas Natural Resources Commission.

Rash said he believes some levee districts along the Mississippi River may have been separated by law.

"If you go through this sweeping attempt at legislation... I would ask that we tread lightly," he said.