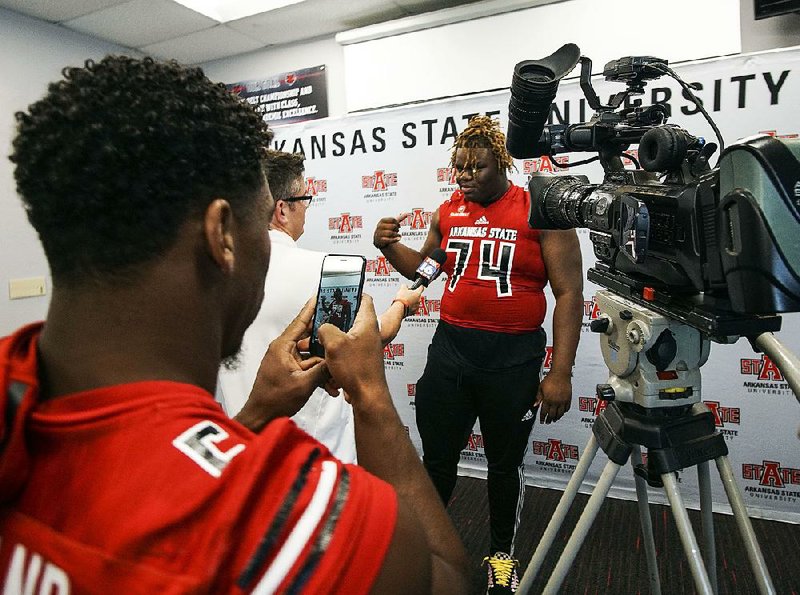 ASU running back Warren Wand snaps a photo of teammate Andre Harris Jr. while he speaks to a reporter during Arkansas State Media Day at the ASU Football Complex in Joneboro Thursday, August 2, 2018.

JONESBORO -- A big question mark for Arkansas State University heading into fall camp was the offensive line play. It's a unit that has experienced a lot of overhaul since last season.

Still started all 13 games last season, and Harris started 11 of the 13. Junior-college transfers Horst, Scott and Ramirez are all new faces.

Offensive coordinator Keith Heckendorf said Monday he's been particularly impressed by Horst, who began fall camp No. 3 on the depth chart and has since solidified the starting job. He has big shoes to fill after Lanard Bonner, a 2018 first-team All-Sun Belt pick, departed.

"We knew the talent [Horst] had, but we said you got to earn it," Heckendorf said. "It didn't take him long to move up. Just the work ethic, what he brings in terms of the length and the athleticism to that position, has been a need. He's addressed that. Our team has embraced him.

"Proud of really that whole group up front. They have really made a commitment to what we've asked them to do. They have lost a lot of weight across the board, they've gotten in better shape, they're a lot more athletic, and they're playing physical right now."

Behind redshirt junior starter Logan Bonner, there's been a tight competition for the backup quarterback role during fall camp.

On ASU's first official depth chart, there was an "OR" listed between Coats and Hatcher in the backup spot, indicating the job competition remains close.

"They've both done a really nice job. To be honest with you, I got confidence in either Carson Coats going in the game or Layne Hatcher going in the game," Heckendorf said. "We've been splitting the [second-team] reps, trying to get them guys as many looks as we can. I think we're gonna need both of them at some point in this season."

Heckendorf said if the situation presented itself in a game today, Coats would be called upon before Hatcher.

At the tight end position, sophomore Reed Tyler -- who started five games in 2018 -- is listed as the Red Wolves' starter. Tyler has taken the bulk of the first-team reps throughout fall camp, so it comes as no real surprise.

But Tyler wasn't the tight end on the roster who garnered preseason accolades. That was redshirt junior Javonis Isaac, who started seven games last year and was a preseason first-team All-Sun Belt selection. Isaac is now listed as a backup with redshirt freshman TW Ayers.

Sophomore Marcel Murray, who was ASU's leading rusher last year, is clearly the team's No. 1 running back. But figuring out his backup was another concern for Heckendorf in camp. Not anymore.

"Coming out of camp, I feel like that may be one of our deeper positions on offense," Heckendorf said.

Behind Murray, the Red Wolves will rely on junior Ryan Graham, a transfer from Sierra College (California).

"He's a versatile player. He does a lot of things coming out of the backfield," Heckendorf said. "He just makes plays, and that's been great to see."

"Obviously, Marcel is still our guy, and he'll be our workhorse," Heckendorf said, "but we've got some people in there that can give him a blow and feel really good about it."