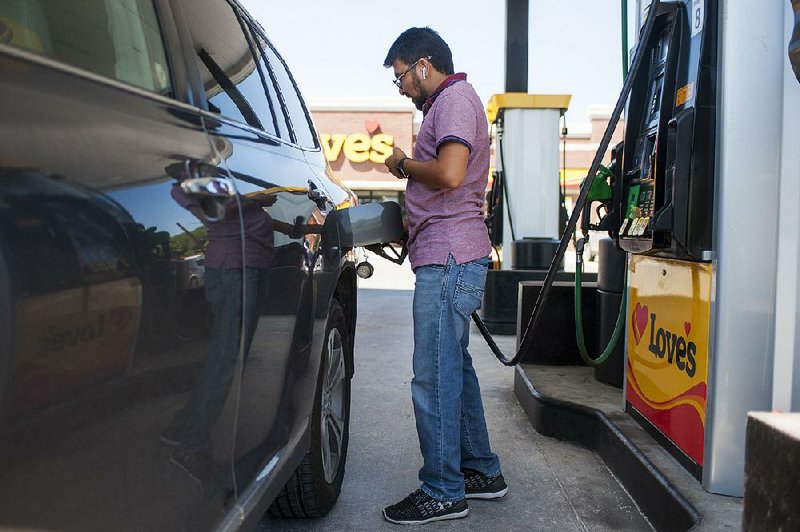 Ketan Patel of Kentucky fills up Wednesday at Love’s Travel Stop in Little Rock. Travelers will find low gas prices this weekend. In Arkansas, the average price for regular is 31 cents lower than a year ago.

While the holiday was created in the late 19th century to honor workers, it has come to mark the end of the summer travel season and often is used for weekend trips and other recreational activities.

Gas prices in most areas of the nation, especially the South, will be worker friendly. The national average price of a gallon of gasoline is poised to be the cheapest Labor Day weekend average in three years, according to AAA, the national travel club.

"For Americans who bookend summer with road trips, they will find gas prices this coming weekend that are cheaper than this past Memorial Day and last year's Labor Day holiday," said Jeanette Casselano, a spokeswoman for AAA.

Arkansas fuel prices are even lower. The statewide average on Wednesday was $2.26, according to the travel club. That price is 31 cents less for a gallon of regular than a year ago when the average price was $2.57.

In fact, AAA predicts that gas prices in the South and Southeast, generally the least expensive in the nation, will fall to around $2 by year's end.

The good news also extends to the weather, which is expected to be mild by Arkansas summer standards this weekend.

"Temperatures are going to be pretty nice," she said.

Slight chances of rain creep into the forecast beginning Friday and lasting through Sunday, mainly in the northern part of the state, Cross said.

"The rain chances are pretty low," she said. "It's no reason to prevent us from having a good weekend."

Meanwhile, state, county and local law enforcement agencies have been putting more of their officers and deputies on roadways to concentrate on drunken-driving enforcement.

The stepped-up enforcement is part of a National Highway and Traffic Safety Administration initiative to improve highway safety that includes statewide advertisements explaining the dangers of driving impaired, according to the Arkansas State Police.

"Labor Day should be a time for friends and family to enjoy the last days of the summer season," said Col. Bill Bryant, the Arkansas State Police director and the Governor's Highway Safety Association representative. "We're asking motorists who may choose to drink, not to drive. Choosing not to drink and drive will result in safer travel for everyone and keep impaired drivers out of jail."

The National Safety Council projects that the nation will have 398 deaths and 45,300 serious injuries as a result of roadway crashes during the Labor Day weekend, which begins at 6 p.m. Friday and concludes midnight Monday.

The projected numbers are actually the lowest estimate the council has issued since 2015, a reflection of a trend that saw road deaths decline by an identical percentage in the first six months of 2019 compared with the same period a year earlier.

The council also cites alcohol as a major factor in fatal crashes during holiday weekends. In 2017, the most recent year for which data are available, more than a third of all fatal crashes involved an alcohol-impaired driver or motorcyclist.

"We want that last hurrah to be fun, not fatal," said Lorraine Martin, the council president and chief executive officer.