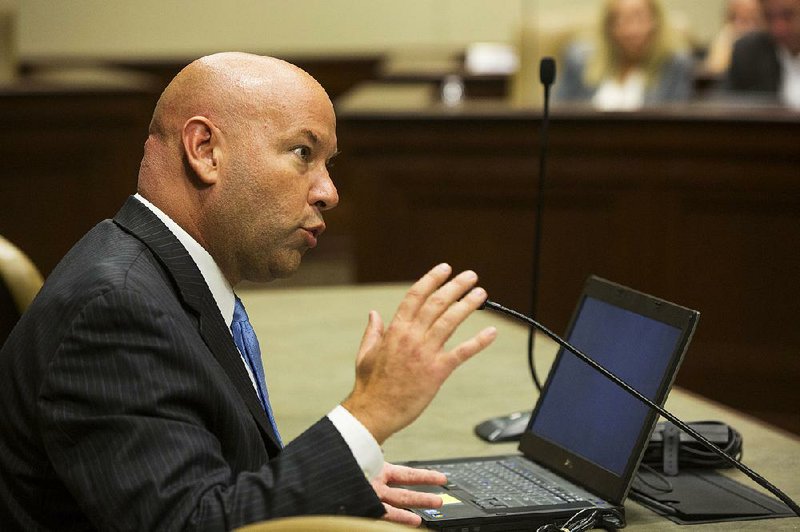 Office of of the Arkansas Lottery director Bishop Woosley is shown in this file photo.

FAYETTEVILLE -- Efforts to offer a Razorbacks-themed lottery ticket date back to the earliest days of the state-run operation, the director of the Arkansas Scholarship Lottery said Wednesday.

"We've been working for 10 years to get a Razorback ticket, and we finally got it," Bishop Woosley, the lottery's director, said outside Donald W. Reynolds Razorback Stadium at a kickoff event for the new $5 scratch-off tickets.

The tie-in involves the lottery paying a $141,000 licensing fee, according to state documents, though the deal involves the Razorbacks' multimedia-rights holder Learfield IMG College rather than the university directly, said Hunter Yurachek, athletic director for the University of Arkansas, Fayetteville.

The lottery, which began operation in 2009, raised $98.4 million for college scholarships in the 12-month period that ended June 30. By law, sales of the Razorback-themed tickets will support students regardless of which school they choose to attend, Woosley said, with no extra scholarship dollars for UA students.

Yurachek, after describing the scholarship benefits of the lottery, called it a "natural fit" for a ticket to be branded with the Razorback logo.

Moving forward, UA "is just supporting it [with] an event like this, to make sure it's successful, because it does benefit young men and women across this state," Yurachek said.

The Wednesday event included appearances by UA men's basketball coach Eric Musselman and football coach Chad Morris. Roughly 40 people attended, with ice cream available as well as giveaways of baseball caps and T-shirts featuring a small Razorback logo and the slogan "Get In The Game."

Yurachek said that before UA agreed to the deal, he met with Chancellor Joe Steinmetz and the university's vice chancellor for governmental relations, Randy Massanelli.

"The chancellor's executive team did discuss this, because this is a little bit out of the box," Yurachek said.

Woosley said he approached the university about the possibility of a Razorbacks-themed ticket, crediting Yurachek, named athletic director in December 2017, as having "fast-tracked" the proposal.

"We appreciate his willingness to work with us," Woosley said.

In announcing the new Razorback-themed tickets, the Arkansas Scholarship Lottery stated that since 2009, more than $182 million in scholarship dollars have been awarded to students attending UA.

State documents describing costs associated with the Razorback-themed tickets refer to an agreement between the lottery office and Scientific Games International, with Scientific Games to "invoice [the lottery] in the amount of one hundred forty-one thousand dollars ($141,000) for payment of the License Fee for this game."

Game players will scratch off the ticket to see if they match "winning numbers" printed on the ticket. In a nod to the sports theme, footballs, baseballs or basketballs will be scratched away, depending on the ticket.

One expert said such college sports tie-ins have been rare for state-run lotteries.

"We don't see this very often in college sports because the NCAA is very concerned about sports gambling," said Victor Matheson, professor of economics at College of the Holy Cross in Massachusetts.

At least one other state lottery has marketed a similar tie-in to collegiate sports. Florida's lottery features a "Gridiron Cash" scratch-off ticket with Florida Gator and Florida State Seminole logos, according to the lottery's website. In 2013, The Associated Press reported a $138,000 licensing fee paid to IMG College.

In Arkansas, the lottery has deals with a few other universities, including Arkansas State University, involving marketing and promotion, Woosley said. The lottery does not have other tickets with a theme tied to a college's athletic program, however.

"We try to work with some of those universities who have larger athletic presence, and, ultimately, we'll see how this ticket does" in terms of sales, Woosley said when asked about the possibility of other school-themed tickets. "If it does well, then we'll probably segue into other things."

COMMENTS - It looks like you're using Internet Explorer, which isn't compatible with the Democrat-Gazette commenting system. You can join the discussion by using another browser, like Firefox or Google Chrome.
It looks like you're using Microsoft Edge. The Democrat-Gazette commenting system is more compatible with Firefox and Google Chrome.