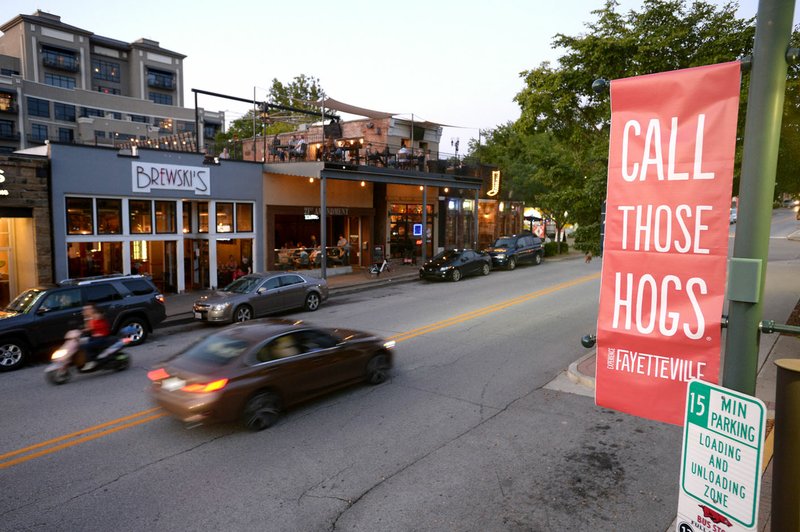 Motorists pass Aug. 15 as a small crowd of people gathers in bars on Dickson Street in Fayetteville. The City Council on Tuesday will take up for a second time a proposal to define the boundary and rules for its entertainment district, a new designation created under state law. ( NWA Democrat-Gazette file photo / Andy Shupe)

FAYETTEVILLE -- Bar and restaurant owners who met with city officials Thursday generally voiced support for having an entertainment district ordinance but with restrictive regulation and relative infrequency of events.

The meeting was called so Mayor Lioneld Jordan, department heads and the city's tourism director could answer questions. About 15 representatives of downtown businesses attended. Jordan also held a meeting with members of the Dickson Street Merchants Association earlier in the week.

The City Council took up the first reading of the district proposal Aug. 20. Jordan asked council members to hold off on a decision after the second reading coming up Tuesday.

Act 812, sponsored earlier this year by Sen. Trent Garner, R-El Dorado, gives cities in Arkansas the authority to set reasonable standards for the regulation of alcohol possession within such districts.

Such districts are becoming more common in Arkansas and across the nation.

Entertainment districts are up and running in Little Rock, El Dorado and Mountain Home, and Sherwood's City Council voted Monday to establish a district, which is expected to open this fall.

The measure in Fayetteville would allow event organizers to ask approval to let attendees walk around with alcoholic drinks within the entertainment district boundary. The boundary covers most of downtown, with residential areas excluded. Jordan would have the authority to approve or deny outdoor drinking for an event. Events already have to have a permit to operate.

Any event wanting outdoor drinking would have to close the street where the event is taking place. Anyone drinking outside would have to use a reusable or compostable cup of no more than 16 ounces.

Another aspect of the proposal allows administrative approval of sidewalk cafes.

Justin Urso, co-owner of Big Box Karaoke, expressed concern about a mobile vendor with alcoholic drinks undercutting alcohol sales at his business. Mobile vendors don't have the overhead costs his establishment does, he said.

"If they're out there selling $2 margaritas versus our $10 margarita, and we have people coming in and out of establishments, that's something we're going to have a lot of concern about," Urso said.

Jordan said he would take that under consideration.

Molly Rawn, executive director of Experience Fayetteville, said having administrative approval for outdoor drinking wouldn't grant an organizer a liquor license. The farmers market, for instance, wouldn't be able to suddenly sell alcohol. It's something Rawn said she will bring up with the Alcoholic Beverage Control agency.

The idea is the containers people carry during events would come from businesses, and businesses could decide whether to distribute them, said Garner Stoll, development services director.

Nick Zazal, director of events and patron services with Walton Arts Center, said if events with outdoor drinking are popular there will be more of them, which could create a slippery slope.

"If you think I'm going to have one of these every weekend, that's not going to happen," he said."We are going to take our time with this thing. I'm not going to turn this into something wide open like Beale Street [in Memphis]."

Kevin Frey, owner of Puritan Coffee & Beer, said it would be a disservice to the city to not have the option to adopt an entertainment district. An ordinance just needs to limit how far outdoor drinking can go, and have regulations in place that mayors after Jordan would follow, he said.

"I feel like all of you have your heads on straight. We're not talking about people who are going to sign everything for every event," Frey said. "I feel like us having this in our back pocket is valuable."