Tigers the hunted as season kicks off

Freeman, from Little Rock’s Episcopal Collegiate, did so well in 2016, his first season, he was named the Great American Conference Freshman of the Year.

He was even more productive as a sophomore in 2017, catching 9 touchdown passes for an OBU team that won the GAC title and advanced to the NCAA Division II playoffs.

“It doesn’t get any easier,” said Freeman, who has 153 receptions for 1,953 yards and 18 touchdowns in three seasons. “It actually puts a bull’s-eye on your back.”

Freeman, undersized at 5-9, 160, was talking both as an individual and as a member of an OBU football program that is coming off consecutive conference titles, topped by last season’s 12-1 run to the quarterfinals of the Division II playoffs.

Fre e m a n re a d i ly a c - knowledges that last season, book-ended by 10-catch games, wasn’t quite what he was expecting.

“It was weird,” Freeman said. “Having that first game [10-109 receiving], it was exciting. Battling through some injuries, it was tough. As a player, you never want those things to happen. But everybody was prepared. Guys go down. That’s just the nature of the game. You never want that to happen, but you have to prepare for that. We were prepared. Those guys did a tremendous job when we were down. Next man up mentality.”

Freeman ended up with 54 catches for 560 yards and scored 3 times, once in the opener against Northwestern Oklahoma, once in Week 9 against Arkansas-Monticello and once in the season-ending 37-14 playoff loss to Ferris State.

Mostly, the Tigers rode a strong rushing attack and the nation’s No. 2 scoring defense.

“I can’t be disappointed, because we did win,” Freeman said. “That’s all that matters, the wins. At the end of the day, that’s what goes down on the piece of paper.”

There were reasons for Freeman’s statistical decline — he battled injuries, along with teammate Drew Harris, and the Tigers were breaking in a new quarterback, redshirt freshman Brayden Brazeal.

Freeman said the team did what it had to do to win — run the ball, play relentless defense and utilize the field position gifted to it by punter Jake Ford and his 39.0-yard net average.

“In our receivers group, you can only control what you can control,” Freeman said of his individual stats. “and you’ll get what you’re supposed to get in the end.”

Freeman said the team is in good hands with Brazeal at the helm and offensive coordinator Jay Derby calling the plays.

“Brayden makes the best decisions, as a redshirt freshman quarterback, as you could have possibly made,” Freeman said. “He makes the right decisions, and Coach Derby makes sure he knows the checks and reads. We were proud of him. We were excited he could do that. It’s an example of how good he could be going forward.”

Freeman said there are lessons to be learned — for Brazeal as the GAC Freshman of the Year, and the entire team coming off a 12-1 season with most of cast returning,

“There’s a target on our back, but at the same time, we can’t play that way,” Freeman said. “We have to play as if we’re trying to be better than we were last year. What we did last year doesn’t matter. It’s in the past. What we do this year is really going to show what kind of football team we have.”

NOTEWORTHY Tigers were picked in the coaches poll to finish first in the Great American Conference, receiving eight first-place votes. They are ranked No. 5 in the Division II preseason poll. … Seven starters return on offense, 9 on defense. … Tigers went 11-0 in the regular season, their closest call coming in a 7-3 victory against Harding in Searcy. They won their first Division II playoff game (35-7 over Indianapolis) before losing in the quarterfinals to eventual national runner-up Ferris State, 37-14. … Brazeal (118-192-1,411 passing, 10 TDs, 2 INTs; 88-539 rushing, 6 TDs) returns at quarterback after being named as the GAC Freshman of the Year. … Cori Gooseberry (6-4, 295) returns for a fourth season at offensive tackle, but twin brother Justin Gooseberry, the other pillar on last season’s offensive line, graduated in the spring and is utilizing his final year of eligibility at Rice University. He will be replaced by junior Austin Blair, who has starting experience at guard but missed the second half of last season with a knee injury. … Kris Oliver, the GAC’s all-time leading rusher, is gone, but there is plenty of experience returning in the backfield. Thomas and Brown combined for 1,467 yards and 23 touchdowns. Freeman (54-560-3) returns for a fourth season at wide receiver but Drew Harris (26-323-3) and La’Darius McElroy (18-301-3) must be replaced. … Leading tackler Airric Parker and stout nose tackle Ernest Reed are gone on defense, but there are nine returners from a unit that led the nation in fewest points allowed until yielding 37 in the finale against Ferris State. The Tigers (11.5 ppg) finished No. 2 to conference rival Harding (11.3) in the GAC and in the nation. Johnson, Guymon, McDonald, Lassiter, Evans (honorable mention All-American) and defensive backs Gregory Junior and Jonathan Harris accounted for 405 tackles, 12 interceptions and 28 tackles for loss. … The Tigers intercepted 19 passes, 4 by Evans, and forced 24 turnovers in 13 games and had a plus-17 (+1.30 per game) turnover margin. Senior punter Jake Ford finished fifth in the nation in net punting (39.0 ypp) and allowed a total of 11 return yards all season. Ford punted 51 times, dropped 26 inside the 20 and recorded just 1 touchback. Ford will also handle kickoffs this season, but the place-kicking responsibility will fall to true freshman Gabe Goodman, who converted 124-128 PATs and 22-27 FGA at Arkadelphia High School.

Brazeal, a redshirt sophomore from England, said he is confident he can do whatever Derby and Coach Todd Knight want him to do.

Brazeal said he knows there are folks around the GAC who are not convinced about his ability to throw.

And if the offense struggles, senior middle linebacker Jon Johnson said the defense is there to lend a hand.

“We’re ready to show people what we’ve got,” he said.

It’s a team-wide attitude, Johnson said, preached by Knight and his staff.

“You hunt, or you’re the hunted,” Johnson said. “We’re not trying to be the hunted this year. We’re trying to hunt everybody like we did last year. If somebody gets in our way, we’re just going to have to take care of them.” 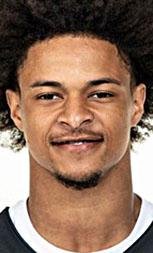