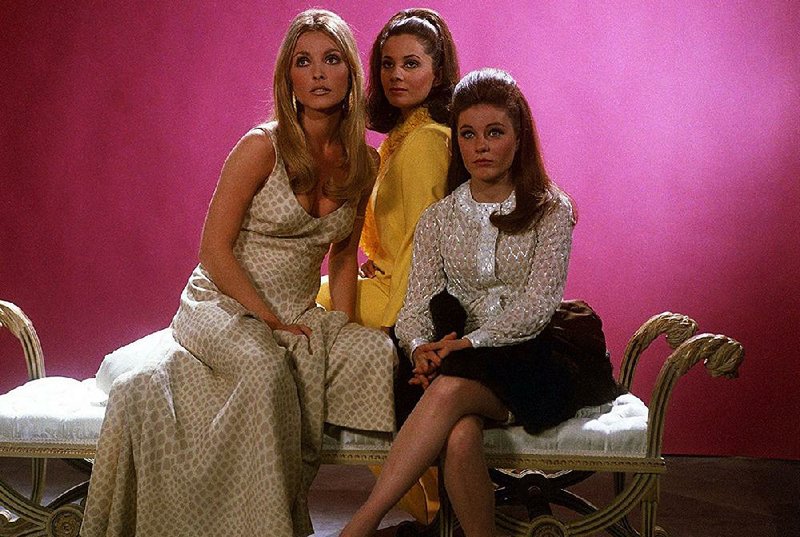 Ready for their close-up: The three main characters in Valley of the Dolls are (from left) Jennifer North (Sharon Tate), Anne Welles (Barbara Parkins) and Neely O’Hara (Patty Duke). Amazingly, the three never appear in one scene together.

When space allows, we will examine said films and offer useful advice as to how they could have been made better.

You would think a good movie could have been made of a trashy best-seller like Valley of the Dolls. This potboiler was quickly made in 1967 to cash in on the millions who read the book and wanted to see the three main characters alive on the screen.

The casting was the main problem. Also the director. And perhaps a decent screenplay would have helped. Except for the lovely main title theme sung by Dionne Warwick, the music (by André and then-wife Dory Previn) was nothing to sing about. But John Williams (yes that one) got his first Oscar nomination for the score.

With these deficits, it's a wonder the film earned cult status.

The raison d'tre is because the film is camp, from beginning to end. The only thing that would have served the film better was if Anne, Jennifer and Neely had been played by drag queens.

Patty Duke, an exceptional actress, (playing a Judy Garland-like character) just didn't have the pipes of a singer or the legs of a dancer for Neely O'Hara. And the director allowed her to over-act and chew the scenery. Sharon Tate was a no-talent playing a no-talent Jennifer North. With all the young women in Hollywood at the time, it is amazing others weren't up for these parts. Barbara Parkins was OK in her role as Anne Welles, the sensible career girl who succumbs -- briefly -- to the "dolls" of the title.

This tidbit from IMDb demonstrates why a lot of what happened: Mark Robson [the director] had a very combative relationship with all his actresses, particularly singling out Sharon Tate for his harsh treatment. Patty Duke hated working with him and, years later, after his death, still called him "a mean" SOB. (In 1957, Robson directed one of the best soap operas of all time: Peyton Place. Perhaps the 10 years had hardened him.)

In a TV interview with Parkins and Duke, they remembered Judy Garland, playing Helen Lawson, would arrive in the morning with her entourage and wait for her scenes to be shot. She and the group would start drinking. But the director would wait until late afternoon to shoot Garland's scenes, and by then she was too drunk to perform. The producers fired her, eventually replacing her with Susan Hayward, whose voice was dubbed by Margaret Whiting. Ginger Rogers, Lucille Ball and Joan Crawford were also considered. The real-life drama was better than the movie drama.

The Lawson character was based on Ethel Merman, who had a song by Betty Hutton cut from a Broadway show they were in called Panama Hattie. That is the same thing that Lawson does to Neely in the film. Talk about your irony. In real life, Hutton goes to Hollywood and becomes a star. And plays Annie Oakley in the film version of Merman's Broadway triumph, Annie Get Your Gun. And Hutton replaced Garland, who was having a nervous breakdown and couldn't finish the film.

Also from IMDb: "'Dolls' was a slang term at the time for dolophine, a popular downer."

After all was said and done, the film became 20th Century Fox's top moneymaker of 1968.