ASU happy to play a game 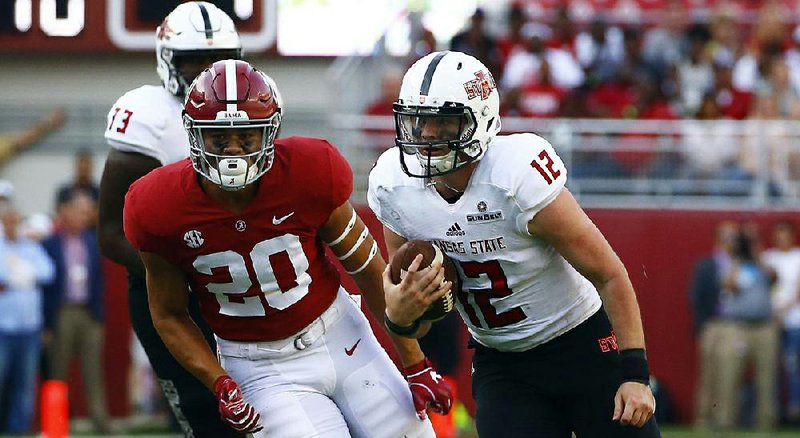 JONESBORO -- Just eight days ago, the Arkansas State University football team and coaching staff gathered inside a Jonesboro church to mourn the passing of Wendy Anderson.

So were hundreds of others, including many coaches from other schools. SMU Coach Sonny Dykes and SMU strength and conditioning coach Kaz Kazadi, who was in the same role at ASU for one season in 2017, were two of them.

Although the Red Wolves and Mustangs are opponents in the season opener, that was the last thing on anyone's mind that day.

"I thought [it] was an incredibly nice gesture for them to show up here," ASU senior backup quarterback Carson Coats said on Aug. 23. "We play them in a week, but I mean, it's bigger than that. It's bigger than any game you can play."

ASU Coach Blake Anderson's wife, Wendy, died of cancer Aug. 19. Since then, the Red Wolves have been trying to find a way to move forward as their head coach continues his leave from the team.

A week later, football is back at the forefront as ASU and SMU meet tonight at 6 in Jonesboro. The Red Wolves will hold a moment of silence for Wendy Anderson before kickoff at Centennial Bank Stadium.

"Blake is a friend of ours, and Wendy was a close friend of ours as well," Dykes told SMU reporters on Monday. "I know the [ASU] players loved her and respected her and have a lot of respect for Blake and what he's going through and how he's handled it.

"They're gonna be ready to play, they're gonna be excited to play. They would be otherwise, but I think even more so now just because of the situation."

Anderson will not be on the sidelines for ASU. Defensive coordinator David Duggan remains the interim head coach.

Dealing with the death of Wendy Anderson -- who was a beloved, motherly figure to many players -- hasn't been easy for this team, especially so close to the season opener. But Duggan repeatedly has stated the Red Wolves still have a job to do and need to continue with the plan.

"I've been pleased with the team's effort," Duggan said. "They come out here and they concentrate."

And if there's been one Red Wolves player who's embodied that more than any other, it's been redshirt junior starting quarterback Logan Bonner.

Bonner will make his first start tonight after spending his past three seasons watching Justice Hansen from the sidelines.

"We talked about the players stepping up and being here for each other in this challenging situation, but he's been one guy that's really been part of pulling everybody forward, pulling everybody in the same direction," Duggan said. "He's a leader that way. That's gonna obviously translate hopefully on Saturday to the football field."

Just as it was for Hansen, this team is now Bonner's. He's won over the locker room and has the trust of the coaching staff and his teammates.

Now the Rowlett, Texas, native simply has to prove it when it matters most, starting tonight against the Mustangs.

"It's a dream come true," Bonner said. "That's why I came here, to lead this team into a game, and I think that I'm ready for it. I've been preparing for it for a long time."

SMU also could have a quarterback making his first start in a Mustangs uniform.

Shane Buechele -- a graduate transfer from the University of Texas, where he started 19 games in three seasons for the Longhorns -- is likely to start. SMU also could decide to roll with sophomore William Brown, who started three games in 2018.

The uncertainty has forced ASU to prepare for two quarterbacks -- one who has no previous tape of playing for his current offense, and one who's played sparsely in any offense.

Whoever Dykes decides on, SMU's signal caller will have a dangerous pair of wide receivers to throw to in senior James Proche -- who statistically was one of the nation's top wideouts last year -- and junior Reggie Roberson.

"Man, James Proche, I can't wait to guard him," junior cornerback Jerry Jacobs said. "We got a pretty good package that I'm gonna be playing him man-to-man a lot, so [hopefully] we get to that so I can really show the world who I am."

It was just two years ago when SMU handed ASU a 44-21 defeat in Dallas. Tonight in Jonesboro, the Red Wolves get a shot at revenge.

After a challenging two weeks off the field, it couldn't come at a better time.

"I feel like the coaches have got a good game plan in for whatever they throw at us," senior wide receiver Omar Bayless said. "I feel like we'll be ready."

COMMENTS ASU has won 12 of its past 14 home openers. … The Red Wolves return 13 starters from last season, including six on offense and seven on defense. The team landed 11 players on the preseason All-Sun Belt teams, the most of any program in the conference. … SMU has 16 returning starters, including seven on offense and nine on defense. … ASU has seven new assistant coaches on staff, including both the offensive and defensive coordinators. … Duggan hasn’t been a head coach since he was in charge of the Cologne Centurions of NFL Europe from 2006-07.