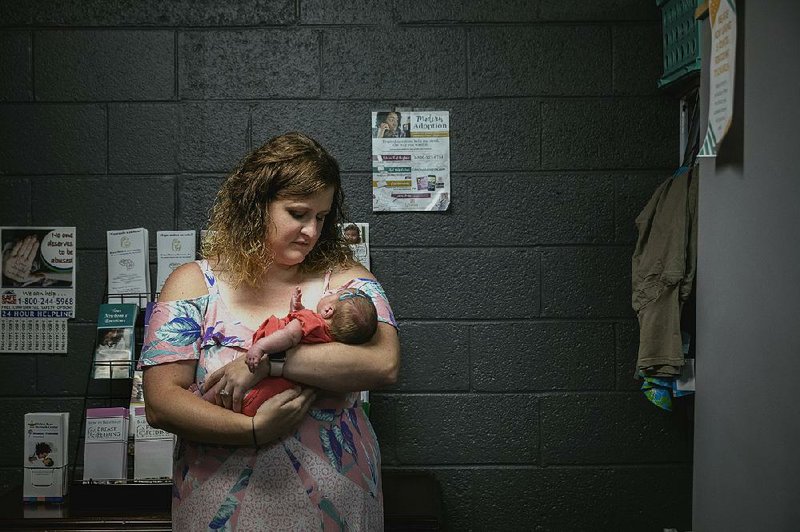 NEWPORT, Tenn. -- Wendy Ramsey began her day as she often does, in the cool basement of Lincoln Avenue Baptist Church. It was a Thursday, and her first client was coming at noon. She flipped on the fluorescent lights.

Racks of infant, toddler and maternity clothes neatly lined the waiting area. Formula and baby food were on the shelf, free for anyone who came. A flier for a local domestic violence shelter was taped to the cinder-block wall, one of its tabs ripped off.

A whiteboard in her office listed her prayer requests: for her clients, for their salvation and for babies.

"We are very open about what we do here -- I guess more so, what we do not do here," she said. "We are not a medical facility, we do not perform abortions, and we do not refer for abortions. You can see the form right there."

She pointed to the sign-in clipboard. The disclaimer was printed in bold and all caps.

The June morning was quiet, the opposite of the anti-abortion protests she used to attend. Protests alone, she had come to think, were "not how Jesus handled anything." She remembered a Bible story of Jesus welcoming an outcast woman -- people like the pregnant women and new mothers she now spends her days trying to help.

"If we want to be pro-life, we have to want more than legislation," she said. "It just can't begin and end there."

Under the presidency of Donald Trump, the anti-abortion movement has more power than it has wielded in decades. Roe v. Wade is in the crosshairs. Nine states have drastically curbed abortion rights in the past few months. Alabama banned nearly all abortions, including in cases of rape or incest.

In Tennessee, conservative lawmakers are pushing a heartbeat bill, which would ban abortion as soon as six weeks into a pregnancy.

But in this eastern part of the state, a rural and conservative region of cherished religious values, the abortion debates in Washington, in statehouses and on cable news can seem distant.

Here, the front line of the anti-abortion movement is a woman working out of a church basement.

'MY HEART IS FOR WOMEN'

Options is one of more than 2,700 anti-abortion pregnancy centers across the country. It is affiliated with Care Net, one of the three largest networks of such centers in the United States, whose homepage calls for action against "the pro-choice Left," which it says "publicly defends infanticide."

NARAL Pro-Choice America calls pregnancy center activists "anti-choice extremists" who "lie to and mislead women to prevent them from considering abortion." Planned Parenthood clinics, like one in Memphis, report that pregnancy center volunteers try to lure women away from their doors with gift bags or protest vigils.

"All of that is directed at shaming patients who come for abortions and stigmatizing abortion, which is a part of health care," said Aimee Lewis, a vice president for Planned Parenthood of Tennessee and North Mississippi. "They are fake clinics."

Options, like many independent anti-abortion pregnancy centers, is not a licensed medical clinic. But unlike some centers, it does not pretend to be. Volunteers do not force women to hear fetal heartbeats or show them photos of aborted fetuses. Women are informed that the volunteers are not professional counselors. The vast majority who come have already decided to have their babies.

Instead, the mission is to assure women they can handle the challenges to come, no matter the obstacles. The center helps them find jobs, emotional support or even a place to shower.

"Circumstances don't make a woman what she is," Ramsey said. "My heart is for women to know their worth," she said, "that they have a purpose, and that life is not too hard or extreme for them to meet the purpose that they want to do."

"I just don't know this is a war we are going to win politically," she went on. "I wish people could just think people, not power. What is the good for the people?"

'HOW CAN WE HELP THEM'

Ramsey's first client arrived, almost eight months pregnant. She was 19 and worried about being a first-time mother. Ramsey asked what success looked like to her and popped in a breastfeeding DVD to go over ways to hold a baby.

The videos are part of a Christian curriculum designed for anti-abortion pregnancy centers. When a client comes to Options, she watches a short video, does some homework reflecting on the day's topic and then earns "Baby Bucks," points she can trade for clothes, supplies, cribs -- anything in their donation stockpile.

"We have to do a pregnancy test to start giving her stuff," Ramsey explained between clients, otherwise "things get traded and sold."

Down the hall, Brier Smart, 22, and her boyfriend finished a Bible study session. She dragged a pile of free infant clothes to the couch and began to fold each onesie while he played with their 7-month-old.

They had been coming since she was 30 weeks pregnant. When the Health Department reduced their son's formula allotment with the Women, Infants and Children (WIC) supplemental nutritional assistance program, they were grateful Options could help out.

Newport, a city of about 6,800, was getting a little better, Smart said. There was the updated movie theater and pool at the park. But many people they knew from school were now addicted to drugs -- particularly methamphetamine. Grandparents were left raising children.

Ramsey stood in her office, reflecting on her mission. She could remember only three times when a client said she came to Options thinking about abortion.

"I don't ever look at a baby and think, 'This is going to make this girl's life way worse,'" she said. "When I see people that are living in poverty, I don't look at it like those people shouldn't have a kid because they aren't going to take care of it. I look at it as those people aren't in a good situation, how can we help them be in a better situation, with or without a kid."

She finds truth in the critique by many who support abortion access that their opponents do not care about life beyond birth. "All we want is the baby to be born, and then we are not going to give the parents any kind of tools to take care of it," she said of many others in the anti-abortion movement. "We are not going to come alongside them, we are just going to feel like we won."

'A SENSE OF PRIDE IN FAMILY'

The last client left for the day, and Ramsey drove toward Cocke County High School, which she graduated from in 2006 before attending Bible college in Knoxville. There, she dreamed of moving to India to fight human trafficking and even refused to wear shoes for a month to protest global poverty.

Last summer, a leadership club at the high school volunteered to serve dinner at the annual Options fundraising banquet. It seemed that the whole town showed up: the local judge, the dentist, nurses, a pediatrician, the state representative. Together they raised $35,000 to refurbish a donated house so Options could move out of the church basement, a move set for later this year.

This night, Ramsey met with teachers, health care providers, law enforcement and other community leaders to brainstorm how to get all the county's children ready for kindergarten.

Together the group discussed how to increase day care opportunities, make transportation accessible for people without cars and educate parents about nutrition. They had a refrain: "The community owns the problem, the community solves the problem."

"People take pride in being able to provide for their families," the county mayor, Crystal Ottinger, said a few days later. "They can't always do that for whatever reason: unemployment, disability, it may be drugs. I'm not going to sugarcoat it. We are rural Appalachia. But they still have a sense of pride in family here."

It is a reason she thinks Options works -- people have to earn points and take classes, not simply take free stuff. "The more people that Options can help, the more likely they are to give back," she said.

Ramsey said her work was about helping women and their babies, but she also had an underlying hope: that they would commit their lives to Jesus. She offers extra points for Baby Bucks if they go to church. "I can't lie," she said. "Ultimately I just don't think that there can be an abundant life without Jesus. If they say that's manipulative and a secret tactic, then I will not apologize for it." 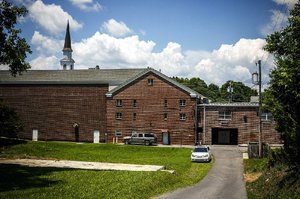