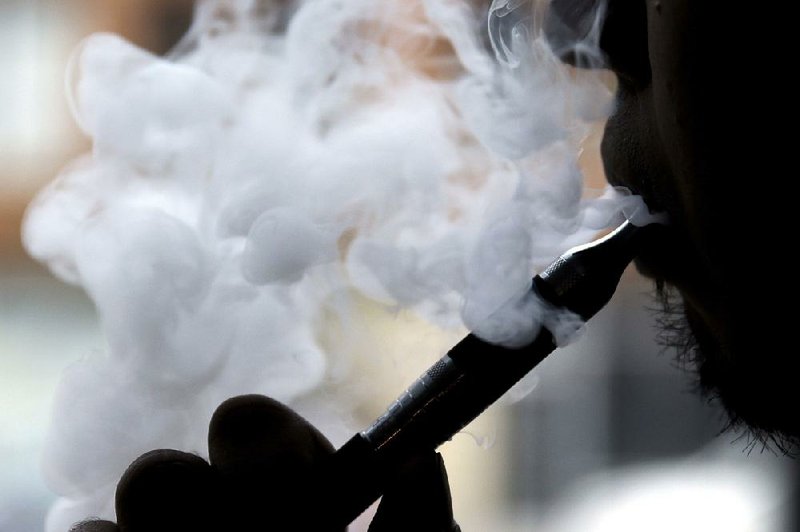 FILE — A smoker fires up an electronic cigarette in Chicago in 2014.

U.S. public-health officials warned Americans who aren't already smokers to avoid e-cigarettes and other vaping devices after a mysterious outbreak of a severe lung disease emerged in recent weeks, which has sickened at least 215 people across 25 states and has been linked to at least one death.

The U.S. Centers for Disease Control and Prevention and the Food and Drug Administration are working with state health departments to try to figure out what is causing the damage, which they say appears to be tied to vaping. In many cases, patients reported using vaping products that included cannabis or THC, the active ingredient in marijuana, before falling ill. The agencies also cautioned against altering commercial vaping products or consuming home-brew substances.

Many people believe vaping is safer than traditional cigarettes and tobacco, which are linked to 8 million deaths a year that are caused by cancer, heart disease and other conditions, according to the World Health Organization. E-cigarettes are promoted as a potentially safer alternative that could help smokers quit and save lives, though health officials are still working to understand their side effects and risks as they become more popular.

The emergence of symptoms in patients with severe lung damage hasn't always followed a consistent pattern. Many reported a slow buildup before they were hospitalized, including difficulty breathing, shortness of breath and chest pain. Others appeared to have a virus that produced fevers and fatigue, or gastrointestinal issues like throwing up and diarrhea.

It's not yet clear if there is a common cause or if patients are suffering from different conditions with similar symptoms, officials said.

Public-health authorities are investigating the brands and types of e-cigarette products used by the patients, where they were obtained, and whether any of them would fall under the FDA's regulatory authority. They asked health care providers to report any cases of severe pulmonary disease in patients who had used e-cigarettes within the past three months to state or local health departments.

"More information is needed to better understand whether there's a relationship between any specific products or substances and the reported illnesses," the officials said. "At this time, there does not appear to be one product involved in all of the cases, although THC and cannabinoids use has been reported in many cases."

Dr. Scott Gottlieb, the former commissioner of the FDA, also noted the use of THC in e-cigarettes.

"I think this is probably going to be associated with illegal products," Gottlieb said. "It's not like the major manufacturers have suddenly changed their ingredients. It's probably something new that has been introduced into the market by an illegal manufacturer, either a new flavor or a new way to emulsify THC that is causing these injuries."

The lung illnesses aren't the only health concerns being investigated that are linked to e-cigarettes.

The FDA is investigating 127 reports it has received of vaping associated with seizures.

The health warning comes as e-cigarette giant Juul Labs is facing a mounting number of state and federal investigations into its marketing and sales practices.

A top government official pledged Friday to use all of the government's regulatory and enforcement power "to stop the epidemic of youth e-cigarette use."

The attorneys general in Illinois and the District of Columbia are examining how Juul's vaping device became so popular with young people.

The company's rapid rise to the top of the multibillion-dollar U.S. e-cigarette market has been accompanied by accusations from parents, politicians and public-health advocates that Juul fueled a vaping craze among high schoolers. In addition to the ongoing inquiries in Illinois and the District of Columbia, which had not been publicly disclosed before, four other state attorneys general are investigating or suing Juul.

Juul's top executives have disputed allegations that they have marketed their products to teens, declaring that they've taken unprecedented steps to combat underage use of its e-cigarettes. The company has shut down its Facebook and Instagram pages and pulled several of its flavored products out of retail stores. Juul also backs federal legislation to raise the minimum age to purchase all tobacco products, including e-cigarettes, to 21 nationwide.

Juul spokesman Ted Kwong declined to answer specific questions about the investigations in an emailed statement but reiterated past company steps to prevent underage use. Juul announced Thursday that 50 retail chains have pledged to adopt the company's age-verification system, which requires sellers to scan a customer's ID before selling Juul products.

Health and Human Services Secretary Alex Azar said in a statement Friday that President Donald Trump's administration "will continue using every regulatory and enforcement power we have to stop the epidemic of youth e-cigarette use."

A senior Illinois law enforcement official described to AP a wide-ranging inquiry being conducted by the office of Illinois Attorney General Kwame Raoul that is centered on whether Juul violated state consumer fraud laws and other statutes by designing and marketing its products to appeal to underage users. The official was not authorized to speak publicly and requested anonymity.

Marrisa Geller, a spokeswoman for District of Columbia Attorney General Karl Racine, confirmed in an emailed statement that an investigation of Juul is underway. She said Racine is concerned about "the dramatic increase in the use of vaping products by district youth" as well as the policies and practices employed by e-cigarette manufacturers to prevent minors from using their products.

The attorneys general in Colorado, Connecticut and Massachusetts have announced investigations of Juul related to concerns over underage use of its products. North Carolina's attorney general filed a lawsuit against Juul in May, asking a court to limit the company's sales and marketing in the state.

All six attorneys general are Democrats.

The FDA said in October that it seized thousands of documents from Juul's San Francisco headquarters related to the company's marketing. The agency has been investigating whether the company targeted children with the flavors, design and ingredients of its products.

The Wall Street Journal reported Friday that the Federal Trade Commission is investigating Juul's early marketing campaign and use of social media to promote its products. The FTC declined to comment.

Juul has repeatedly stated that it understands the concerns about underage vaping and has taken "the most aggressive actions" of any company in the industry to combat the problem. It said it has spent millions of dollars on newspaper, radio and online advertisements pledging to keep its products out of the hands of young people.

The company also has denied it ever marketed to anyone underage.

Juul, which got its start in 2015, now controls roughly three-quarters of the U.S. retail market for e-cigarettes. Last year, 1 in 5 U.S. high school students reported vaping in the previous month, according to government survey figures.

Information for this article was contributed by Michelle Fay Cortez of Bloomberg News; by Sheila Kaplan of The New York Times; and by Richard Lardner and Matthew Perrone of The Associated Press.