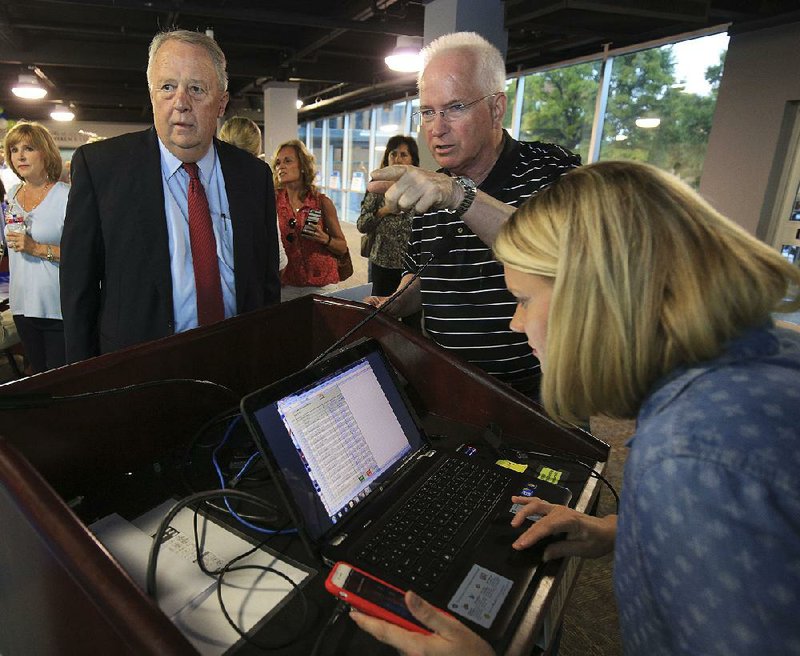 North Little Rock Mayor Joe Smith conceded he got ahead of himself when he asked the city's airport commission to hold a special meeting Friday to approve a new agreement with the aviation company that operates out of the city airport hangar.

Smith asked commission members to discuss the lease and assess their support for it, but final approval must wait until it is vetted by the city's bond counsel, he said.

Smith said he wants to move quickly to get the necessary agreements in place before the city moves ahead with a $15.8 million bond issue. About $4.9 million of the issue is set aside for airport improvements.

"I want you to get almost there," Smith said. "What's come up this morning is our bond lawyer said, 'Whoa, whoa, wait a second. Before you all go into a long-term lease, we need to look at it.' Because we've been in such a hurry, we -- the mayor -- forgot the bond lawyer needed to be involved in this."

Although the proposed lease with the North Little Rock Jet Center drew criticism from some quarters of the airport community and at least one commission member, the commission approved the new lease with some revisions and subject to the approval of bond counsel.

The meeting came just days after a divided North Little Rock City Council approved the revenue bond issue for capital improvements that are designed to cover, in addition to the airport improvements, the higher construction cost for a new police and courts building.

The ordinance, which combined two separate series of bonds, authorizes issuance of Series 2019A bonds of $10.875 million for the police and courts building and Series 2019B bonds of $4.925 million for airport improvements.

Smith voted to break a tie and approve the ordinance, 5-4. Smith also voted to break a tie on an amendment that failed but that would have allowed the two bond issues to be voted on separately. The bonds won't be issued until after a 30-day referendum period that allows any challenge to their approval. The bonds are to be secured by city franchise fee revenue.

The airport bonds are to help pay for a new general aviation center, a corporate aircraft hangar and expanded parking at North Little Rock Municipal Airport, 8200 Remount Road. The project also includes space for a $1.125 million restaurant that the airport would lease to the locally owned Homer's restaurants, which would own and manage the establishment.

At issue Friday was renewing the lease with the North Little Rock Jet Center, which manages the city hangar where corporate jets lease space, sells fuel and performs other services for private and corporate aircraft.

The existing lease expires in March. It has been in place for almost 20 years.

The proposed lease would be in place for an initial term of 10 years, with two extension options -- the first for 10 years and the second for five years. Annual rent is $32,943, adjusted for the cumulative consumer price index every five years. The lease also contains a provision in which the city pledges not to sell aviation or jet fuel.

Some members of the airport community objected to the annual rent, which is equivalent to $1 per square foot of leased space; the length of the lease; a provision allowing the assignment of the lease to another party; and the city being prohibited from selling fuel. They also questioned the rush, given the existing lease doesn't expire for another six months.

Further, they questioned the length of the lease, especially given that the North Little Rock Jet Center isn't required to make a sizable investment.

"The commission has the specific obligation to reject them if they are not in the airport's best interest," according to one letter from concerned members of the airport community.

Tommy Murchinson, owner of the North Little Rock Jet Center, said his investment in the operations include the people he employs. He also said the length of the proposed lease was shorter than the 40 years he sought.

Aware of the letters, Smith said the airport also has an obligation to the city.

"In this situation, probably three-fourths of this construction we want to do is economic development," Smith told the commission. "It has to do with the city, more so than it does general aviation."

When North Little Rock corporate executives such as Steve Williams at Maverick Transportation or Dennis Oakley of Bruce Oakley Inc. bring in clients from "New York, Mexico or Canada, we need to make that first impression," the mayor said. "They need to see we're a progressive, aggressive city. I think we're doing this with this project.

Both were among North Little Rock executives who last year had complained about the state of the airport, which lacks the latest amenities for corporate executives who visit and their pilots.

As for the rush, Smith said he has 30 days to get all the moving parts in place to issue the bonds.

Commission member Don Blakey objected to the provision prohibiting the city from selling fuel. He cited federal assurances governing the Federal Aviation Administration money the airport receives for improvements, which forbids granting exclusive rights to a range of aeronautical activities, including the selling of fuel.

But Clay Rogers, airport director, said he didn't think the provision prevented any other entity from establishing a presence at the airport to sell fuel.

City attorneys said they would check with the FAA before the agreement is finalized.