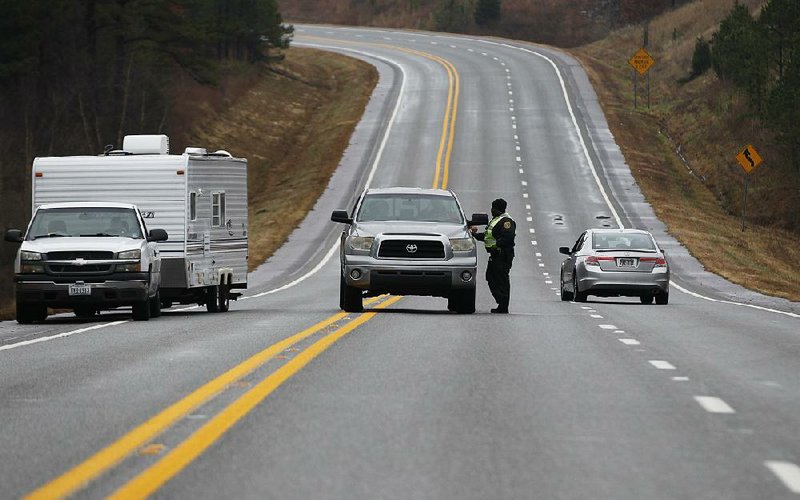 Pulaski County sheriff’s office deputy Bruce Scott notifies drivers Saturday on Arkansas 10, near where police were in a standoff with a shooting suspect, that the highway is closed. The highway reopened about noon Saturday. ( Arkansas Democrat-Gazette / Thomas Metthe)

Law enforcement officers from multiple agencies in central Arkansas helped, initially, in the search for the suspect and then in the ensuing standoff.

About 1 a.m., Saline County deputies were dispatched to the 6500 block of East Sardis Road in Hensley, where five people had been shot, according to a news release.

About 3 a.m., investigators publicly identified John Grable as a suspect in the case.

Grable refused to leave the vehicle, and the Pulaski County SWAT team's crisis negotiations unit was called in to help, McCoy said.

For the next seven hours, deputies and troopers blocked off all lanes of Arkansas 10 in the stretch surrounding Grable's vehicle as negotiators worked to get Grable to surrender, McCoy said.

Most of the negotiation, McCoy said, was done through a phone.

A deputy stationed on Arkansas 10 turned away all vehicles in the area, telling each driver the same thing: "I've got some good news and some bad news. The good news is you're going to have a great day. The bad news is the road is closed."

Arkansas Game and Fish Commission officials worked to keep anglers participating in the fourth Fall Series Tournament with the Lake Maumelle Bass League from straying too close to the standoff, Burk said.

Traylor said the shooting victims were all adults and that four of the five were in "serious but stable" condition in a hospital as of Saturday afternoon.

The other victim had been released from the hospital by Saturday evening, according to reports.

A statement from the Saline County sheriff's office said the shooting was the result of a domestic dispute.

It provided no details.

Traylor said Saturday afternoon that Grable had been charged with five counts of criminal attempt to commit capital murder and had been transported to the Saline County jail.