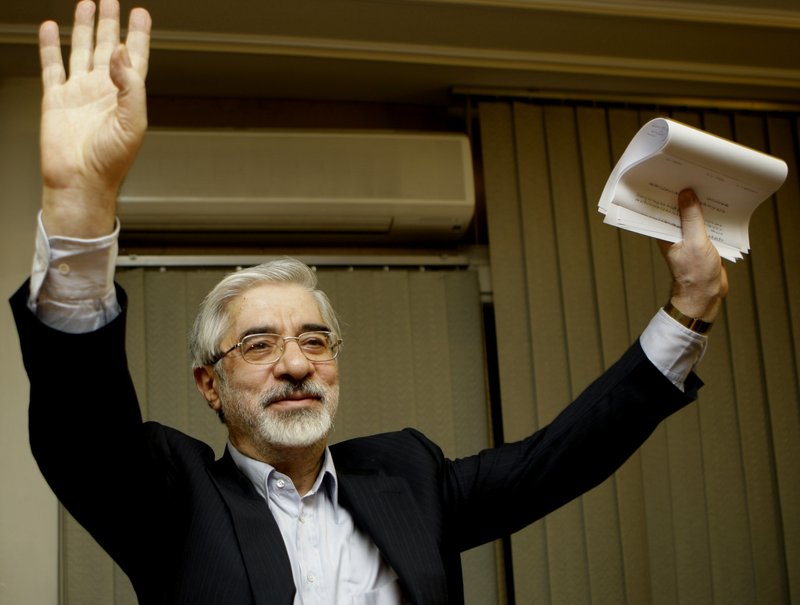 DUBAI, United Arab Emirates -- A long-detained opposition leader in Iran on Saturday compared a bloody crackdown on gasoline-price protesters to soldiers of the shah gunning down demonstrators, which led to the Islamic Revolution.

The comments published by a foreign website represent some of the harshest yet attributed to Mir Hossein Mousavi, a 77-year-old politician whose own disputed election loss in 2009 led to the widespread Green Movement protests that security forces also put down.

Mousavi's remarks not only compare Supreme Leader Ayatollah Ali Khamenei to Shah Mohammad Reza Pahlavi, the toppled monarch whom Khamenei to this day refers to as a tyrant, but suggest the opposition leader views the demonstrations and the crackdown as a potentially similar last-straw moment for Iran's Shiite theocracy as the 1978 killings represented for the shah.

"It shows people's frustration with the country's situation. It has a complete resemblance to the brutal killing of people on the bloody date Sept. 8, 1978," Mousavi said, according to the statement published by the Kaleme website long associated with him.

There was no immediate response from Iranian officials nor state media outlets, which have been barred from showing Mousavi's image for years.

The protests that struck some 100 cities and towns across Iran beginning Nov. 15 came after Iran raised minimum gasoline prices by 50%.

The scale of the gasoline-price demonstrations remains unclear even today as Iran so far has not offered nationwide statistics for the number of people arrested, injured or killed. Amnesty International believes the protests and the security crackdown killed at least 161 people.

One Iranian lawmaker said he thought that over 7,000 people had been arrested, though Iran's top prosecutor disputed the figure without offering his own.

The country's interior minister said as many as 200,000 people took part in the demonstrations. Iran blocked access to the wider internet for a week, further shielding its response from the world's view.

Mousavi and his wife, Zahra Rahnavard, remain under house arrest in their home down an alleyway near Khamenei's official residence in Tehran. However, the Kaleme website occasionally publishes statements from Mousavi, who earlier served as Iran's prime minister before the position was eliminated in 1989.

That September day in 1978, soldiers opened fire on demonstrators in Jaleh Square.

How many the shooting killed remains in dispute today, with figures running anywhere from 86 to 4,000.

However, historians mark the day as the point of no return for the fatally ill shah. Mass protests and strikes followed.

The shah fled Iran in January 1979 and by the next month, the revolution took hold.

In his statement, Mousavi offered his condolences to those slain in the November crackdown and warned "this wound on the nation's body and soul" would not heal until there are public trials of their killers.

"The bullying and talking about how we are in the middle of a world war are not a convincing answer for the people and it would not heal the people's wounds," Mousavi said, referring to tensions with the U.S. "It would be enough that the system just think about the consequences of the Jaleh Square assassinations."

Mousavi is not the only one to compare the November crackdown to the time of the shah, however.

Days earlier, lawmaker Mohammad Golmoradi at the Iranian parliament got pulled away after some news websites reported he criticized President Hassan Rouhani over the crackdown.

"What did you do that the shah didn't?" Golmoradi reportedly asked.