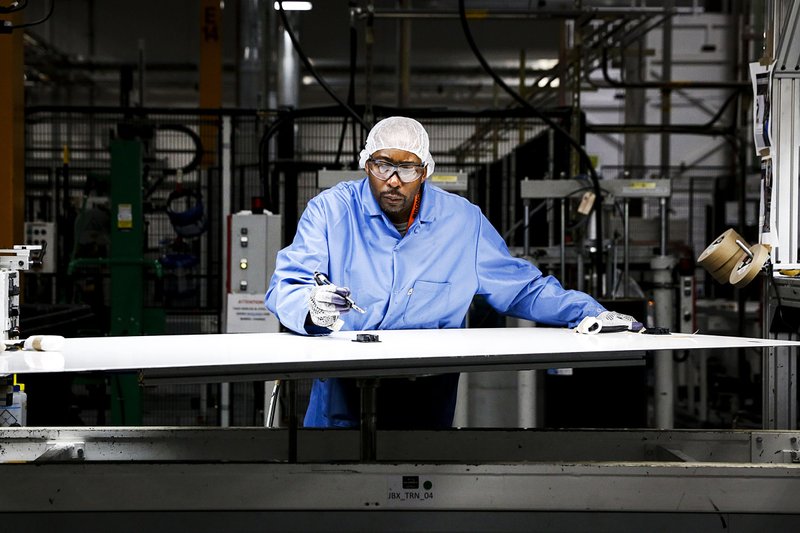 A worker inspects solar panels at a SunPower Corp. facility in Hillsboro, Ore., in August.

Perhaps no corporate executive in America has been whiplashed more by President Donald Trump's trade wars than Tom Werner.

It's not that his company, San Jose, Calif., solar-panel maker SunPower Corp., has been ruined by the trade tumult. In some ways, it's arguably no worse off today than it was before Trump imposed tariffs on imported equipment.

But the sheer breadth of the shifting winds that have buffeted SunPower and repeatedly forced 59-year-old Werner to rethink strategy and the company's supply chain sheds light on the toll of the trade war. The saga also underscores why executives across America have sought policy certainty from the Trump administration.

Over the past two years, SunPower was hit with duties on panels it makes overseas; won an exemption; was threatened with tariffs on equipment it makes in Mexico; and watched rivals gain access to a tariff loophole.

During this time, Werner bought a manufacturing plant in Oregon, sold it, leased space in that factory, announced that the company would split into two and worked to raise cash through a share sale.

Along the way, Werner became a regular at the Sofitel hotel by Lafayette Square in Washington and the Sweetgreen salad shop nearby. Back and forth he went -- more than a dozen times last year -- to persuade officials to exempt his company from tariffs. "It was surreal," he said. "I went from running a business to being in a hearing room testifying."

That Werner and SunPower appear to have come out the other side of the tariff storm in decent shape -- the stock is down less than 10% over the past two years and the company is positioned to capitalize on the growing U.S. rooftop-solar market -- doesn't negate the distractions that it caused. But it does suggest the approach of lobbying Washington relentlessly and adjusting plans quickly offers something of a loose guide to other executives ensnared in the trade war.

"We simply could not afford the tariffs," Werner said. "It was almost life or death. It was the biggest of big deals."

As a cocktail of renewables subsidies and mandates propelled American solar into the mainstream, developers came to rely on cheap imported equipment -- much of it from Asian nations. The tariff threat upended the U.S. market, with the number of industry jobs sliding by almost 8,000 last year. For SunPower, the duties proved costly: $1.5 million to $2 million in duties each week.

When the announcement about levies was made in early 2018, it couldn't have come at a worse time for the company. SunPower was in the midst of a restructuring, and its stock was down over 75% from the highs of 2014. For Werner, getting a waiver was a priority.

He made the case that SunPower was never subsidized by China, the country at the fore of Trump's trade war, and doesn't import panels from there. And he noted that the company produces premium panels, which are more expensive than what's made in the Asian nation. But it was also true that the firm did most of its own manufacturing in Malaysia, Mexico and the Philippines.

Government trade advisers were clear: they wanted U.S. solar manufacturing. Werner arranged to buy a factory in Hillsboro, Ore., from a struggling peer after coming to favor what it offered: a ready workforce and a plant that could be brought online swiftly.

The gambit worked. Within months, SunPower won a tariff exemption. By then, it had paid $46 million in tariffs, more than a quarter of its annual payroll last year.

But that wasn't the end of its trade story. Earlier this year, it faced potential duties on goods from Mexico, where it has a facility. That prospect forced Werner -- who had been focused on a fundraising process that ultimately led to a spinoff of most of its manufacturing business -- to swiftly consider alternatives.

Trump didn't follow through with the Mexico threat, but his administration soon introduced a surprise exemption for bifacial, or double-sided, panels -- a decision that undermined SunPower's own exclusion. While the government moved to close that loophole in October, an ongoing legal fight over its removal has at least temporarily kept it in place.

"There's a lot of uncertainty about United States trade policy," says Michael Weinstein, an analyst at Credit Suisse Group AG. "Any kind of trade-war uncertainty drives up the cost of capital and makes the future more uncertain."

In some ways, the solar tariffs have succeeded. A few new factories have opened in the U.S. since they were imposed. SunPower -- in which Total SA has a 49% stake -- has invested in the Oregon factory, and now leases a third of the facility. It employs about 250 people there.

"The Trump solar tariffs have been very effective at inducing hundreds of millions of dollars of new solar investment on U.S. soil and creating thousands of jobs," White House trade adviser Peter Navarro wrote in an email.

Before the tariffs were announced, Werner lobbied against their enactment. This wasn't against type: he is one of the longest-tenured solar CEOs and reared on years of Silicon Valley's free-market orthodoxy.

Werner now says the experience has taught him the importance of not being overly reliant on any one part of the supply chain. Tariffs "do have an impact. They can change economics," he said. "Supply chains are becoming more flexible. There are different priorities that exist now: flexibility, diversification, and future-proofing."

Information for this article was contributed by Justin Sink of Bloomberg News.