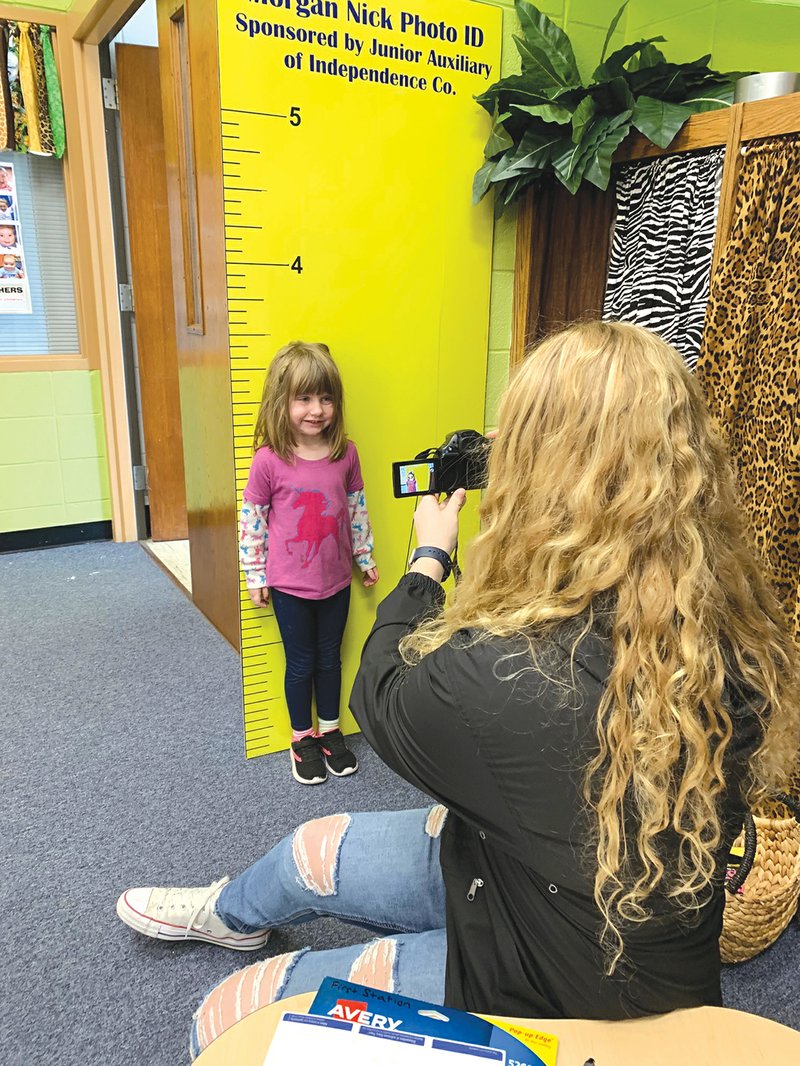 Batesville Junior High School student Carissa Cordell takes a photo of preschooler Fallon Hawkins to be included in a child identification kit. Junior high EAST students came to the Batesville preschool Friday to fingerprint and photograph children and collect a strand of their hair for DNA purposes.

By the time Batesville preschooler Aailyah McCoy sat down with seventh-graders Logan Warden and Kali Sandy, the little girl’s eyes were wide and round. She’d already been fingerprinted and photographed and was now about to have a hair plucked from her head to be preserved in a child identification kit.

After taking a seat in a small chair inside the preschool’s resource room, Aailyah sat almost motionless beside her classmate Fallon Hawkins as the older girls donned gloves and wielded tweezers to carefully extract a hair from each girl to provide a DNA sample. Then the hairs were sealed into plastic bags to be kept at the preschool.

The kits were put together by students in the Batesville Junior High EAST program; EAST stands for Environmental and Spatial Technologies, an educational initiative in which students brainstorm ideas to improve or help their community, then take action.

Eight EAST students came to the preschool Nov. 15 to fingerprint and photograph the students, ages 2 and older, as well as extract one hair from each student for DNA. Forms were also sent home with parents to record any distinguishing physical characteristics of their children, such as eye color, hair color, birthmarks, scars and more, said Robbie Cox, BJHS EAST Lab teacher.

The forms are free for the preschool students’ families.

“If there’s ever a Morgan Nick alert, then they’ll have the photo with the actual Morgan Nick banner behind them,” measuring the child’s height at the time, Cox said.

Eighth-graders Annalysia Salmon and Sierra Phillips said they were looking for a project and researching what some other schools had done, when Salmon ran across the child identification kits. She knew she wanted to do something similar at the preschool, but she and Phillips would have to rope in some other EAST students to help because, as she put it, “There’s a lot of little kids here.”

”There are a lot of kids abducted in Arkansas,” Salmon said. “Batesville is my home. I grew up here, since first grade. Before that, I lived in New Mexico, not in a very good neighborhood. These kids are the future of Batesville, and we want to protect them and make it safer for them. And if anything ever should happen to these kids, this will help the police — a lot.”

The FBI reported 424,066 missing children in 2018, according to the National Center for Missing & Exploited Children. And the Arkansas Attorney General’s Office reported that Arkansas has more than 500 unsolved missing-person cases.

School Resource Officers Lt. Dustin Robbins and Lt. Cord Davidson came to the preschool to assist the EAST students in collecting the kits.

Robbins said he has advised students on a number of the EAST projects, and he enjoys seeing what they come up with.

“They’re really good, outgoing kids, and they’re super to work with,” Robbins said. “They have so many fascinating, interesting projects; it’s really fun.”

Cox said this is the first time the students have done child identification kits, although EAST students have organized safety fairs at the elementary campuses. Cox said there are more than 150 students enrolled in the EAST program at the junior high school, and the classes have several projects underway at once.

“EAST is really on top of that,” said Robbins, who has helped students coordinate the project. “School safety is a big focus for them.”

He said another project he has helped EAST students with is interviewing military veterans.

Cox said the EAST program is working with the office of U.S. Sen. John Boozman, R-Ark., on the Veterans History Project, which is housed at the Library of Congress American Folklife Center. Cox attended an EAST seminar last summer that included Boozman’s military affairs liaison, retired Col. Anita Deason, as a guest speaker. She also came to Batesville to teach students how to conduct pre-interviews with the veterans and get basic information about years served, locations, any medals or awards earned, etc.

Cox said the students conducted a major social-media campaign asking for names of veterans — they do not have to be combat vets — willing to take part in the interview process.

“We’ve got 16 [veterans] lined up right now, which is really good. It’s a joint project between us and the high school, and we’re just calling it Batesville EAST because we’re all working together to do it. It’s extremely cool,” Cox said. “We just want them to tell their story.”

Robbins said he sat in on one pre-interview of a local World War II Army veteran and would be going back for the rest of the interview.

“This veteran is a friend of mine and — as a paratrooper myself, and he was a paratrooper in World War II — he’s a hero of mine. I was ordered to come back,” Robbins said, laughing, “so I’m going to sit in the back while the kids do the interviewing.”

“The whole goal of EAST is that the kids do it all,” Cox said. “I’m pretty much the bus driver.”