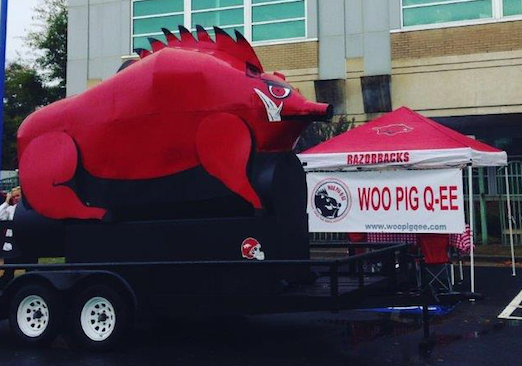 Buddy Rhoads looked out the window of his downtown Little Rock home Monday morning and noticed something was missing — and at about 20-feet long and 14-feet tall, Big Frank isn’t easy to overlook.

“It’s hard to miss,” Rhoads said. “It’s not like you can hide something as big as this is.”

Rhoads said the smoker is usually kept in a secured parking lot, but it was outside his home overnight because he was in the process of making some repairs.

The smoker stays on a trailer, so Rhoads said all anyone needed to do was to hitch the trailer to a truck or large vehicle to tow away Big Frank.

Little Rock police Officer Eric Barnes said the department was called about the theft, but a report was not yet available for release Monday afternoon.

Rhoads and his wife, Dena, bought it several ago after Osborne’s death hoping to combine Rhoads’ talent as a champion competitive barbecue chef with the novelty of Big Frank to raise money for charity — a way to do good and keep the spirit of Osborne’s philanthropy alive.

Rhoads said nothing cooked on Big Frank — whether it's pulled pork, ribs or chicken wings — is sold for a profit, and organizations that have recently benefited from the smoker’s proceeds include Arkansas Children’s Hospital and the Arkansas Enterprises for the Developmentally Disabled, through Hawgs for a Cause.

"We are using this as our way of giving back," Rhoads said. "I figured I would take my talents and put them to a charitable use."

Because of the good that comes from Big Frank, Rhoads said the loss he and his wife feel is more than if some personal property were stolen. They just want Big Frank back.

If whoever has the smoker wants to leave it somewhere in the city and then call police to tell them where it is, Rhoads said he’d gladly go pick up Big Frank.

“I’m not looking to penalize somebody, especially if they’re willing to say ‘I didn’t realize this was not a commercial piece of property,’” Rhoads said. “It’s going to impact our ability to do charity work.”