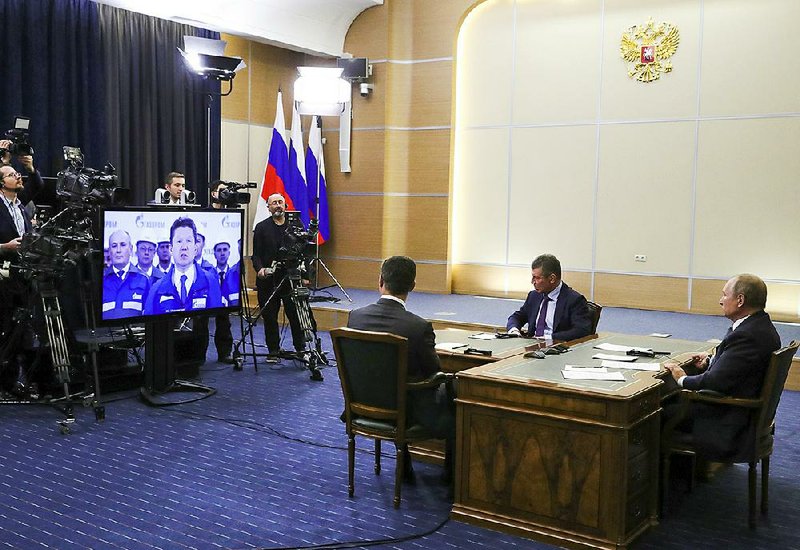 Russian President Vladimir Putin (right) and two of his agency ministers hold a video conference with Chinese President Xi Jinping on Monday during the inauguration of the “Power of Siberia” gas pipeline.

BEIJING -- China and Russia launched on Monday a gas pipeline that is more than 5,000 miles long, an outcome of their long-planned energy partnership.

As its relationships with Europe and the United States have grown more volatile, Russia is looking to market its vast natural gas resources in the East. China is the world's largest energy consumer and needs new supply sources to meet domestic demand.

"This step takes Russia-China energy cooperation to a whole new level and brings us closer to achieving the goal set together with Chinese President Xi Jinping of extending bilateral trade turnover to $200 billion in 2024," Putin said.

The $55 billion pipeline runs almost 1,865 miles from gas fields in Irkutsk and Yakutsk in Siberia to the Chinese border. In China, the pipeline will run 3,175 miles from Heilongjiang province in the northeast to Shanghai.

It bolsters the nations' ties while China is embroiled in a trade dispute with the U.S. It stems from a $400 billion deal signed in 2014 by Russian state energy giant Gazprom, which agreed to deliver 38 billion cubic meters of natural gas annually to China National Petroleum Corp for the next 30 years. Gazprom built the Russian side of the pipeline, which runs from new Siberian gas fields to the Chinese border.

Russia began seeking alternative economic partnerships after the U.S. and European Union imposed sanctions over its annexation of the Crimean Peninsula in March 2014.

Demand for natural gas has risen in northern China as the government seeks to control smog by moving households away from burning coal for heat in the winter. Imports reached 43% of total gas supply in 2018, with about two-fifths of that arriving via pipeline from Central Asia and Burma, with the rest sourced as liquefied natural gas. Burma is often called Myanmar, a name that military authorities adopted in 1989. Some nations, such as the United States and Britain, have refused to adopt the name change.

The Power of Siberia pipeline is a "project of symbolic importance for China-Russia cooperation," said Xi, who expressed hope that the pipeline will become a driving force for economic and social development in the regions it traverses.

"Over the past more than five years, the two countries' participating companies worked together closely, and numerous builders tread on ice and laid in snow, braving the elements to complete their construction tasks," he said.

Gazprom hasn't disclosed the price of the gas, but Putin has said it'll be linked to oil prices, similar to the formula for European consumers. While Russia will have to compete with seaborne supplies of liquefied natural gas from producers such as Qatar and Australia, the expectation is that growth in China's energy needs will require more pipeline and liquefied natural gas capacity. That will benefit other Russian firms such as Novatek PJSC, which is developing liquefied natural gas on the Yamal peninsula in the Kara Sea.

Russian supplies to the Chinese gas market could create obstacles for suppliers of pricier U.S. gas and help strengthen Beijing's hand in trade talks with Washington.

The Russia-China gas pipeline launch comes as Russia races to finish a western pipeline via the Baltic Sea to Germany, Nord Stream 2, which would allow Russia to pipe gas to Europe while bypassing Ukraine.

The Nord Stream 2 pipeline, being constructed by Gazprom and European partners, is more than 80% complete and due to begin operations in the middle of next year. But the project could be frustrated if threatened U.S. sanctions against companies laying the pipeline are imposed.

Ukraine, which earns about $3 billion annually from fees for the transit of Russian gas to Europe, has been urging U.S. officials to stop the Nord Stream 2 pipeline. Moscow and Kyiv have been struggling to reach a deal on gas transit amid friction over Russia's annexation of Crimea and its backing of pro-Russian separatists in the war in eastern Ukraine. The current agreement, negotiated in 2009, expires at the end of the year.

A second gas pipeline being built from Russia to Turkey, TurkStream, also would bypass Ukraine, supplying Turkey and southern Europe.

Russia has 20% of the world's gas reserves and accounts for 17.3% of global gas production, supplying nearly 21% of Europe's pipeline gas imports.

Alexander Gabuev, an analyst on China-Russia relations at Carnegie Center Moscow, said that the pipeline sent a message to Europe and the United States about closer ties between Beijing and Moscow but that eventually China could use it to exert pressure for lower gas prices.

"The deal is a symbol of Putin's pivot to China," he said.

"In the longer term, cheap pipeline gas from Russia will be in competition with American gas," Gabuev said, but since the Russian pipeline has just one customer -- China -- Beijing could exert pressure on Russia, pushing gas prices down.

China will be the main engine for an increase in global gas demand up to 2024, accounting for about 40%, according to the International Energy Agency.

Information for this article was contributed by Yanan Wang and Daria Litvinova of The Associated Press, by Olga Tanas and Dina Khrennikova of Bloomberg News and by Robyn Dixon of The Washington Post.